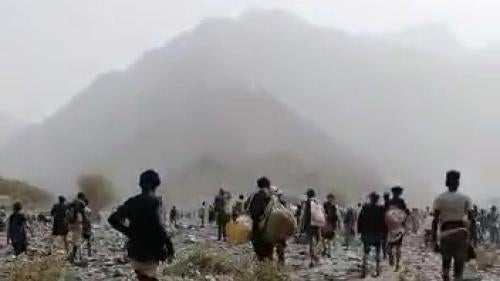 Ethiopian migrants told Human Rights Watch that after they spent days stranded without food or water, Saudi officials allowed hundreds to enter the country, but then arbitrarily detained them in unsanitary and abusive facilities without the ability to legally challenge their detention or eventual deportation to Ethiopia. Hundreds of others, including children, may still be stranded in the mountainous border region.

We Ethiopians are in trouble! We’re going to lose our minds! Please help us! Where are the people to save us?

These images show the conditions of Ethiopian women in a detention center near al-Dayer, Saudi Arabia. The mesh roof allows rainwater in, flooding the prison up to the women’s ankles. This is just one of the prisons and detention centers where Saudi Arabia has been holding the migrants for days, weeks and even months.

“In the prison there is people's feces everywhere. The toilets were overflowing. People sleep on that.”

In a detention center in Jizan, images from the men’s facility depict hundreds of people being held in severely overcrowded and unsanitary conditions.

Trash and excrement at every step, they are forced to sleep in hot, unairconditioned rooms, tightly packed together, with limited access to water to wash.

They were amongst the thousands of Ethiopian migrants that Houthi forces forcibly removed from territory under their control in northern Yemen in April – accusing them of spreading coronavirus.

In the morning at 9:00 [Houthi forces] came and gave us an instruction to evacuate. They came back firing bullets.

Human Rights Watch got firsthand accounts from migrants in Al Ghar, a settlement in Saada governorate, who witnessed people being shot as they were being forcibly removed from their shelters at gunpoint by the Houthi forces and taken to the border with Saudi Arabia.

Saudi authorities opened fire, killing scores of migrants, before allowing hundreds of Ethiopians to enter the country. They are now arbitrarily detaining them in facilities in Jizan Province.

Detainees are given little food. Some receive just three pieces of bread and a bottle of water a day.

Photo evidence supports their accounts that many are developing skin problems due to the unsanitary conditions.

Multiple men said their pleas for medical attention and better conditions are repeatedly denied and answered with beatings from the guards.

I called my husband [who is still detained], their worry is how to get out of that and return home.