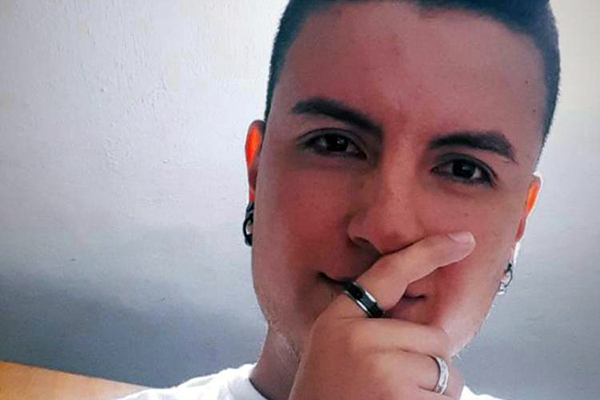 As Stiven Álvarez, 33, walked home from a protest in downtown Medellín on the afternoon of May 1, uniformed officers on motorcycles accosted him, asking what he was doing. When he said he was doing nothing, they began beating him. Álvarez escaped, running, but the police chased him by motorcycle and finally ran him over, leaving his foot stuck under a wheel. Officers beat him again, Álvarez said, with truncheons, fists, and helmets. They kicked him and threatened to kill him, he said, then arrested him, without saying why, and took him by motorcycle to a police station. He spent almost three hours in an improvised cell, in the station’s patio, with sixteen other people. Police occasionally passed by to hit detainees and threaten them, Álvarez said. Human Rights Watch reviewed a document police gave him, which accuses him of being “part of a group of people that were committing vandalism.” Álvarez denied the accusation. After three hours, officers took him to a separate facility, under the provision of Colombian law allowing them to “transfer” people to “protect” them or others. They did not say why. After three more hours, they released him. Álvarez has not been formally charged with any crime. 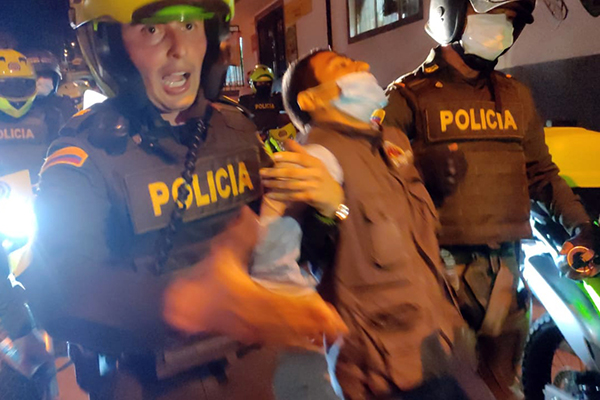 Johan Sebastián Moreno Castro, a 27-year-old lawyer and member of the human rights group Equipo Jurídico Pueblos, was documenting abuses at protests in the city of Bucaramanga, Santander state, on May 4, around 9 p.m., when he said two police officers attacked him. Officers threw him to the ground, kicked him, grabbed him by the neck, and shoved him violently against a wall. An officer beat his head with a stun grenade, he said. Police and ESMAD officers dragged him down the street, bleeding, unable to walk, and barely conscious, Moreno said. Human Rights Watch corroborated a video of the officers dragging him. They lifted Moreno onto a police motorcycle, and he recalls going in and out of consciousness while a police captain who was also on the motorcycle berated him: “Son of a bitch, you are not a human rights defender; you are a guerrilla fighter. I am going to show you how to faint for real.” At a police station, the captain told him he would be prosecuted for “violence against a public servant,” “obstruction of roads,” and “property damage.” Police videoed and photographed Moreno during a medical examination at a nearby hospital and a meeting with a prosecutor. He spent all night at the police station, handcuffed, sleeping on a chair by the door. Human Rights Watch corroborated a video of him upon his release the next morning, hardly walking, with blood on his shirt. Moreno has not been charged.