The intensified restrictions, following a suspicious incident on September 23 in the prison in which four security force members and four inmates were killed, amount to collective punishment. Human Rights Watch and other organizations have long documented grave abuses inside Scorpion, which currently holds between 700 and 800 prisoners, such as a blanket ban on family visits since March 2018 and, since early 2019, deprivation of exercise hours and 24-hour confinement to cells.

“Egyptian authorities are apparently imposing collective punishment on hundreds of inmates in Scorpion Prison, after cutting them off the world for almost three years” said Joe Stork, deputy Middle East and North Africa director at Human Rights Watch. “Conditions in this prison are utterly incompatible with the rights of prisoners.”

Scorpion Prison is located inside Cairo’s Tora Prison Complex. “It was designed so that those who go in don’t come out again unless dead,” Major General Ibrahim Abd al-Ghaffar, a former Scorpion warden, said during a television interview in 2012. “It was designed for political prisoners.” Since the military takeover in 2013, the government has used it to incarcerate many leaders of the Muslim Brotherhood as well as other high-profile political prisoners.

With the resulting overcrowding, cells that measure about two by three meters routinely hold two or three inmates. Sources said that prison guards frequently keep every other cell empty to make it more difficult for inmates to communicate.

In absence of any meaningful investigation, the Interior Ministry claimed that the September 23 deaths involved a failed escape attempt by death row inmates. Human Rights Watch earlier reported, based on accounts by lawyers and inmates’ families and former prisoners, that Interior Ministry forces may have killed the four inmates in reprisal after the inmates attacked and killed the four officers with sharp objects.

A three-page letter and a 13-minute video smuggled out of Scorpion Prison and reviewed by Human Rights Watch, as well as three sources who spoke with Human Rights Watch, indicate that the changes include removing sources of ventilation, light, and electricity from cells, and modifying the sole window, which overlooks an internal corridor, as well as the door slit in each cell to further obstruct any communication between prisoners. Even prior to the changes the cells had no source of sunlight or fresh air.

The three sources, including a lawyer in contact with prison inmates and two people with firsthand knowledge of the changes, said plain-clothes officers whom they believe are Military Intelligence officials have been working in the prison since the killings and have overseen the changes. The sources said that these officers were not the usual prison guards or National Security Agency officers. They interviewed some inmates to “understand their psychology” and “why inmates would kill prison guards,” one of the two sources with firsthand knowledge said.

The smuggled letter and video as well as the sources detailed the new restrictions. Construction workers, whom the sources believe belong to the Armed Forces Engineering Authority, removed the wall-mounted ventilator in each cell in the prison’s four H-shaped buildings. Workers also removed the electric socket, the only source of electricity for daily necessities such as heating water in kettles for drinking or showering, and to run electric mosquito repellents. “Prisoners used to boil water when someone was ill to prepare some tea,” one source said.

The construction workers also removed mosquito nets covering the single window in each cell overlooking a prison corridor and replaced the window bars with steel mesh, further constricting air circulation in the cell. Mosquitos now plague the prisoners all the time, the sources said.

The sources also said that in the H4 building, where the September 23 killings occurred, workers removed the only light bulb in each cell, leaving about 100 cells without any source of light. In the cells in the other three buildings, workers moved the light switches to outside the cell so that inmates could not control them.

During the construction work, authorities moved inmates into crammed cells until they finished that part of the prison and transferred the inmates to the finished cells. “The prisoner is handed one blanket and sent to the cell,” the source said. “If they object, they get beaten.” The source said that prisoners were stripped of all other belongings. He said that 10 inmates were beaten and sent to “discipline cells” after they objected to the new restrictions.

The video, a first of its kind, was recorded before the most recent changes. It offers a rare glimpse into Scorpion conditions that human rights organizations have reported for years. The video shows three inmates sitting crammed together on the floor in a small, dimly-lit cell and a fourth person speaking while moving around. The toilet is not shielded by a curtain. The man talking, likely an inmate but only his hands are visible, said they cover themselves with the blanket they sleep on while using the toilet. Less than a meter separates the toilet from the sleeping area.

The walls and ceiling are corroded from humidity. The narrator says that drops of water sometimes fall from the ceiling. He shows improvised plastic spoons and four small, worn plastic plates which he says they have been using for nine months. He shows something that resembles a wineskin, which he said they fill with water, put bottles containing food into the water, and insert two metal rods connected to electricity with wires to heat the food. 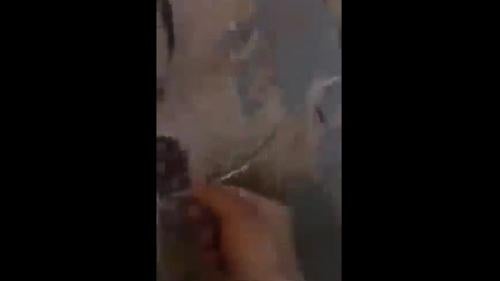 Wet, worn-out inmates’ clothes are hung on ropes attached to the walls to dry. Their few belongings appear in plastic bags hanging from nails. The narrator shows a bar of soap and says each inmate receives one bar every five months. The only source of air is the slit in the door through which they also receive their food. Inmates had to seal the window facing the corridor, because it was too cold and they had insufficient blankets, the narrator said. Human Rights Watch previously documented in a 2016 report the cruel and inhumane treatment by Scorpion officers that probably amounted to torture, including prolonged isolation, months or years-long deprivation of exercise and visits, and beatings. At least 14 Scorpion inmates have died since 2015, according to research by Human Rights Watch and other human rights and media reports. Insufficient medical treatment probably contributed to the deaths of five of those inmates. Amnesty International documented one Scorpion death from torture in 2019 and the Committee for Justice, a Geneva-based human rights group, documented another in 2018. The Egyptian Initiative for Personal Rights, an independent organization, has documented how keeping inmates from having visitors affects other inmates’ rights such as their ability to obtain clothes, blankets, and medicine.

Because of the absence of sufficient natural light to work or read, the lack of humane sleeping and sanitation arrangements, and climate consideration, as well as inadequate floor space, artificial lighting and proper ventilation, the Scorpion Prison inherently violates the basic rights of prisoners as codified in the United Nations Standard Minimum Rules for the Treatment of Prisoners (Mandela Rules). Additionally, prison authorities routinely deprive inmates of access to education, adequate health care, and visits by families and lawyers.

In late 2017, the State Commissioners’ Committee, part of Egypt’s administrative court system, accepted a case brought by Scorpion inmates’ families seeking to have the prison shut down. The committee tasked engineering, health, and human rights experts to examine the prison’s conditions and structure. Human Rights Watch was not able to learn if there was a final court decision. “The lawyer who filed the case stopped working on it because of security threats,” one lawyer told Human Rights Watch.

“The escalation of harsh and abusive conditions in Scorpion Prison comes on top of a years-long terrible situation and makes this a torture facility by definition,” Stork said. “Egypt should seriously fix this place of horrors and ensure that inmates are not deprived of their basic rights as prisoners.”