(New York) – The Chinese government is carrying out an intense attack on the global system for defending human rights, Kenneth Roth, executive director at Human Rights Watch, said today in releasing Human Rights Watch’s World Report 2020. Decades of progress that have allowed people around the world to speak freely, live without fear of arbitrary imprisonment and torture, and enjoy other human rights are at risk, Roth said.

At home, the Chinese government has created a vast surveillance state in its efforts to achieve total social control. It is now increasingly using its economic and diplomatic clout to fend off global efforts abroad to hold it to account for its repression. To preserve the international human rights system as a meaningful check on repression, governments should band together to counter Beijing’s attacks.

“Beijing has long suppressed domestic critics,” Roth said. “Now the Chinese government is trying to extend that censorship to the rest of the world. To protect everyone’s future, governments need to act together to resist Beijing’s assault on the international human rights system.” 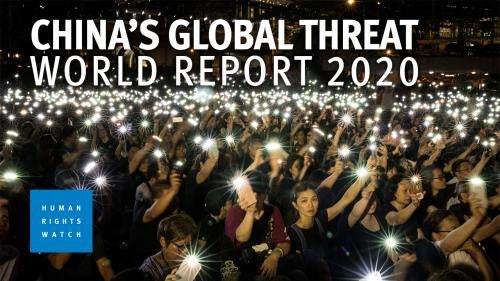 In the 652-page World Report 2020, its 30th edition, Human Rights Watch reviews human rights practices in nearly 100 countries. Roth noted many other threats to human rights around the world, including in Syria and Yemen, where government forces from Syria, Russia, and the Saudi-led coalition blatantly disregard the international rules designed to spare civilians, including the prohibitions against attacking civilians and bombing hospitals.

An inhospitable terrain for human rights is aiding the Chinese government’s attack. A growing number of governments that previously could be relied on at least some of the time to promote human rights in their foreign policy now have leaders, such as United States President Donald Trump, who are unwilling to do so. And the autocratic populists who gain office by demonizing minorities and keep power by eliminating independent journalists, judges, and activists bridle at the same body of international human rights law that the Chinese government undermines.

Many people across China, like everywhere else, want the right to live freely and with dignity, Roth said. But President Xi Jinping’s government is overseeing the most brutal and pervasive oppression that China has seen for decades.

Authorities have shut down civic groups, silenced independent journalism, and severely curtailed online conversation. They are seriously encroaching on Hong Kong’s limited freedoms under “one country, two systems.” And in Xinjiang, authorities have built a nightmarish surveillance system to control millions of Uyghurs and other Turkic Muslims, arbitrarily detaining 1 million people for forced political indoctrination.

Beijing has made technology central to its repression, Roth said, using mass intrusions on people’s privacy through such tools as forced collection of DNA samples, and then deploying big data analysis and artificial intelligence to refine its means of control. The goal is to engineer a society that is free of dissent.

To avoid global backlash for its crushing repression at home, the Chinese government has significantly increased efforts to undermine the international institutions designed to protect human rights. China intimidates other governments – for example, repeatedly threatening other member states at the United Nations to protect its image and deflect discussion of its abuses.

The Chinese government is courting and is itself courted by governments, companies, and even academic institutions that ostensibly support human rights but prioritize access to China’s wealth. They know that publicly opposing Beijing’s repression puts at stake a chance at the Chinese market – 16 percent of the world’s economy – as the US National Basketball Association quickly discovered following a tweet by one team’s general manager.

Chinese authorities have faced few consequences from countries that purport to defend human rights. The European Union, diverted by Brexit, obstructed by nationalist member states, and divided over migration, has found it difficult to adopt a strong common voice on human rights in China, although individual European governments have at times been outspoken. Trump has embraced Xi, although the US government has imposed sanctions for human rights violations on the Xinjiang Public Security Bureau and eight Chinese technology companies.

Rising to the challenge of defending the world from Beijing’s frontal attack calls for an unprecedented response from those who recognize that people and their human rights matter. By acting together, governments could shatter Beijing’s divide-and-conquer strategy, Roth said.

For example, if the Organisation of Islamic Cooperation (OIC) spoke out against the repression of Muslims in Xinjiang, as it did for Rohingya Muslims persecuted in Myanmar, Beijing would face pressure that matters to it.

Governments and international financial institutions should offer compelling, rights-respecting alternatives to China’s “no strings” loans and development aid. Companies and universities should draft and promote codes of conduct for dealing with China – strong common standards would make it more difficult for Beijing to retaliate against those who stand up for basic rights and freedoms. Leaders committed to human rights should force a discussion of Xinjiang at the UN Security Council so Chinese officials understand that they will not gain the respectability they crave while they persecute people.

“Unless we want to return to an era in which people are pawns to be manipulated or discarded according to the whims of their overlords, we must resist Beijing’s assault on our rights,” Roth said. “Decades of progress on rights, and our future, are at stake.”