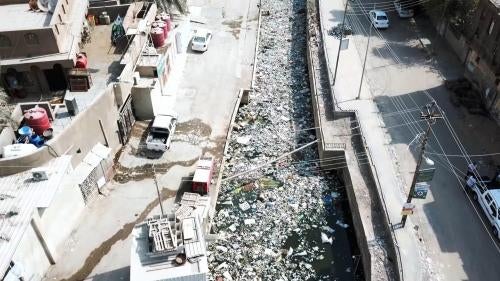 (Baghdad) – Iraqi authorities have failed to ensure for almost 30 years that Basra residents have sufficient safe drinking water, resulting in on-going health concerns, Human Rights Watch said in a report released today. The situation culminated in an acute water crisis that sent at least 118,000 people to hospital in 2018 and led to violent protests.

The 128-page report, “Basra is Thirsty: Iraq’s Failure to Manage the Water Crisis,” found that the crisis is a result of complex factors that if left unaddressed will most likely result in future water-borne disease outbreaks and continued economic hardship. The authorities at the local and federal level have done little to address the underlying conditions causing the situation.

“Shortsighted politicians are citing increased rainfall as the reason they do not need to urgently deal with Basra’s persistent crisis,” said Lama Fakih, acting Middle East director at Human Rights Watch. “But Basra will continue to face acute water shortages and pollution crises in the coming years, with serious consequences, if the government doesn’t invest now in targeted, long-term, and badly needed improvements.”

Human Rights Watch interviewed 58 Basra residents, workers at private and public water facilities, and healthcare professionals, and reviewed water sample tests from the Shatt al-Arab river, treatment plants, and taps in homes. Human Rights Watch also interviewed representatives from Basra’s provincial council, governor’s office, and the Ministries of Water Resources, Municipalities and Public Works’ water and sewage departments, Health and Environment, and Agriculture, and analyzed academic and public health data and over 20 years of scientific and commercial satellite imagery of the region to substantiate many of the findings.

Basra’s primary water sources are the Shatt al-Arab river and its freshwater canals. Human Rights Watch found that Iraqi authorities have failed to properly manage and regulate Iraq’s water resources, depriving people in southern Iraq’s Basra governorate – four million people – of their right to safe drinking water for decades, including during the period of occupation by the US- and UK-led Coalition Provisional Authority. But multiple government failures since the 1980s, including poor management of upstream water sources, inadequate regulation of pollution and sewage, and chronic neglect and mismanagement of water infrastructure, have caused the quality of these waterways to deteriorate.

To cope with water pollution and shortages, Basra residents have had to rely on purchasing water. The high cost, especially during the crisis, falls hardest on poorer residents, and makes them particularly vulnerable to exposure to unsafe tap water.

Jaafar Sabah, a farmer from Abu al-Khasib, a poor town to the southeast of Basra, told Human Rights Watch:

Each year I was getting 50 percent of the yield of the year before, and then in 2018, almost nothing survived. In 2018, the salinity level in the water was so high that I could grab the salt from the water with my own hands. I am dying of thirst and so are my children. There were four cases of poisoning in my family. I have no money and I cannot take them to the hospital. Where do I get the money from?

The crisis has been worsened by reduced freshwater flow rates in the rivers due to upstream damming linked to sugar plantations and other agricultural development, particularly in Iran, and lower rainfall in recent decades. As a result of higher temperatures due to climate change, water scarcity is projected to increase in the region. Yet there are no adequate policies to lessen harmful impacts. This has been exacerbated by unsustainable water use in agriculture and for domestic purposes. The lack of sufficient water has led to seawater intrusion into the Shatt al-Arab, making the water unsuitable for human consumption and irrigation of many crops.

Basra’s public water plants are not equipped with the technology to make sea water potable. This makes chlorine, a chemical commonly used to treat water, less effective. Moreover, experts say that water authorities have struggled to obtain and use adequate quantities of chlorine due to strict controls aimed at preventing the chemical from falling into the hands of groups that have used it as a weapon.

Even where chlorine is added, high levels of turbidity or salt in water can make chlorination less effective for killing bacteria. In addition, Basra’s piping network is cracked, and fecally contaminated groundwater enters into the network so that the amount of chlorine added at the treatment plan will likely not effectively treat the new contaminants entering the system.

In the summer of 2018, at least 118,000 people were hospitalized due to symptoms doctors identified as related to water quality. Authorities still have not published any official investigations into the cause of the health crisis.

Possible causes of the 2018 illnesses include viruses (such as norovirus), parasites (giardia or cryptosporidium), bacteria (e. coli), and toxic metals from sewage and agricultural and industrial pollution. The high salinity of the water may also have contributed to the outbreak, according to experts involved in water sample testing during the crisis.

Human Rights Watch also found evidence of a likely large algal bloom in the Shatt al-Arab during the disease outbreak. Waste in water and higher temperatures associated with climate change can contribute to this situation, but the government apparently did not look into it. Laboratories that tested water samples at the time never tested for harmful algae.

Iraq has no public health advisory system to inform residents when a community’s drinking water is, or could be, contaminated, and what steps should be taken to mitigate harm.

Government engineering projects to improve water quality have failed to materialize due to mismanagement and corruption. For years, farmers and businesses were tapping into the freshwater canals, leaving insufficient water for Basra’s public treatment plants for drinking water.

Agriculture is the main source of income for rural communities in Basra governate. However, irrigation with saline water that damages soil and kills plants and upstream developments have reduced crop production substantially.

To achieve the right to water, governments are obliged to work toward universal access to water and sanitation for all, without discrimination, while prioritizing those most in need. But over 300,000 Basra governorate residents are not connected to the water and sewage network, leading some to illegally tap into the water supply, causing contamination, decreased water pressure, and wastage.

On July 22, renowned Basrawi comedian Ahmed Waheed published a video in partnership with Human Rights Watch calling on Iraqis to demand safe, clean drinking water from the government. He asked Iraqis to post selfies holding a glass of water on social media, using the hashtag #CleanWaterForBasra in solidarity with the people of Basra.

Authorities in Iraq should immediately put in place a public health advisory system that will allow authorities to inform residents when a community's drinking water is, or could be, contaminated, what steps should be taken to mitigate harm, and to establish protocols for government officials to respond to advisories and lift them.

Local and federal authorities should form an inter-jurisdictional independent water and environment task force to monitor the situation, coordinate action by various authorities, and consult with affected populations. It should make public the findings of reports commissioned during the 2018 health crisis and long-term plans to prevent future water crises and to respond to potential crises. It should ensure compensation for those whose livelihoods are affected.

“Access to safe drinking water is not only essential to our survival, but it is a fundamental right for everyone,” Fakih said. “While solving Basra’s water crisis will take serious planning, time, and money, it is possible to address so long as authorities take their responsibilities seriously. The alternative is deadly.”