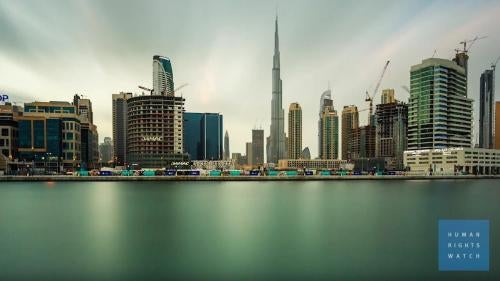 The UAE has recently stepped up efforts to project an image of itself as a progressive and rights respecting nation. In its latest attempt to harness the power of public relations to provide a sheen of respectability to its authoritarian government, the UAE is hosting the first ever World Tolerance Summit.

Set to take place this week in Dubai, the two-day summit will bring together government leaders, academics, and diplomats to “celebrate diversity amongst people from all walks of life, regardless of varying political views, cultural and religious backgrounds.”

But to paint the UAE government as tolerant is laughable. The summit’s website conveniently makes no mention of the UAE’s sustained assault on freedom of expression since 2011, where the authorities detain and forcibly disappear people who criticize the government, and imprison for long periods those deemed guilty of such vague acts as “undermining national unity” and “insulting state symbols.”

In May this year, a UAE court sentenced Ahmed Mansoor, an award-winning human rights defender, to 10 years in prison for free speech-related offenses.

In March 2017,  the UAE jailed the prominent academic Nasser bin-Ghaith, whom authorities disappeared in August 2015, for 10 years on charges including peaceful criticism of the UAE and Egyptian authorities.

Jordanian journalist Tayseer al-Najjar has served almost three years in jail for Facebook posts in which he criticized Egypt and Gulf countries over Israel’s war on Gaza in 2014.

And next week the British academic Matthew Hedges will appear in court on spying charges in a trial marred with due process violations. Security forces arrested Hedges in May following a two-week research trip to the UAE and held him without charge for more than five months, only eventually releasing him on bail in October.

And don’t forget Sheikha Latifa, daughter of the summit’s patron, Sheikh Mohammed Bin Rashid Al Maktoum, the UAE Vice President and Ruler of Dubai. UAE forces forcibly returned and then disappeared Latifa, after she tried to flee the UAE for a new life.

Nothing can hide the UAE government’s fundamental lack of respect for human rights. So long as it refuses to release all those imprisoned for being critical or toeing the official line, Dubai’s claims to be a liberal oasis of tolerance in the Middle East are nothing more than a cruel fantasy.