(Geneva) – The mounting use of incendiary weapons, which cause horrific wounds to civilians, should prompt countries to strengthen the law restricting them, Human Rights Watch said in a report released today at a diplomatic meeting about these and other weapons.

The 30-page report, “Time to Act against Incendiary Weapons,” documents civilian harm from incendiary weapons used in Syria since 2012, focusing on their increased use during the past year’s joint operations by Syrian government and Russian forces.

“Governments that care about protecting civilians should condemn incendiary weapon attacks and call for an end to the use of these exceptionally cruel weapons,” said Bonnie Docherty, senior arms researcher at Human Rights Watch. “Governments should also take action to strengthen international law on the weapons by committing to substantive discussions next year.” 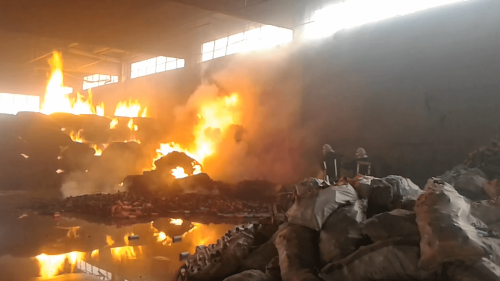 Incendiary weapons produce heat and fire through the chemical reaction of a flammable substance. They can be designed for marking and signaling or to burn materiel, penetrate plate metal, or produce smokescreens. Incendiary weapons cause excruciatingly painful burns that are difficult to treat, and start fires that destroy civilian objects and infrastructure.
Countries that have joined the 1980 Convention on Conventional Weapons are meeting at the treaty’s Fifth Review Conference in Geneva from December 12 to 16, 2016. They should seize the opportunity presented by this major diplomatic gathering, held every five years, to initiate a review of existing legal protections on incendiary weapons.
Protocol III of the Convention on Conventional Weapons governs the use of incendiary weapons, but significant loopholes have undermined the protocol’s effectiveness and failed to deter continued use in Syria and elsewhere.
The protocol applies only to weapons that are “primarily designed” to set fires or cause burns, and thus some countries believe it excludes certain multipurpose munitions with incendiary effects, notably those with white phosphorus. Although white phosphorus can be used for a variety of purposes, the substance causes injuries that are as cruel as those caused by other incendiary weapons. The report documents the use in 2016 of ground-launched white phosphorus munitions by US forces in Iraq and the Saudi Arabia-led coalition in Yemen.
Protocol III illogically contains weaker restrictions for ground-launched incendiary weapons than air-dropped models, even though all of these weapons produce horrific injuries. Although a ban on incendiary weapons would have the greatest impact from a humanitarian perspective, even small changes to the text of Protocol III could significantly enhance its protections and bolster the norm against incendiary weapons.
In addition to documenting the use of incendiary weapons, the new report examines countries’ concerns about incendiary weapons and their positions on strengthening international law. The report is co-published by Harvard Law School’s International Human Rights Clinic, where Docherty is also a lecturer.
There is compelling evidence that Russian government aircraft have delivered incendiary weapons in Syria, or at least have participated in incendiary weapons attacks by the Syrian government. Footage broadcast on Russia Today in June showed incendiary weapons – specifically Soviet-made RBK-500 ZAB-2.5SM bombs – being mounted on a Russian SU-34 fighter-ground attack aircraft at the Russian airbase in Hmeymim, Syria. Only the Russian air force operates this type of aircraft in Syria. Videos and photographs from August 2016 of attacks in Idlib governorate and the remnants left behind show RBK-500 ZAB-2.5SM incendiary bombs, each of which delivers 117 incendiary submunitions. Russia has denied using incendiary weapons.
Human Rights Watch documented 18 incendiary weapon attacks in the opposition-held areas of Aleppo and Idlib between June 5 and August 10, and additional attacks since. For at least a few weeks in mid-2016, incendiary weapons were used on a near daily basis in opposition-held areas.
Incendiary weapons hit a field hospital in Daraya, in the suburbs of Damascus, on August 19, 2016. A doctor in the building at the time of the attack later told Human Rights Watch, “Fires erupted and burned the whole building, along with the equipment…. Now it’s out of service.” He added, “Plastic, wood, everything burned. The fire ate everything.”
Docherty will present her findings at a side event at the United Nations in Geneva at 8:45 a.m. on December 13 in Conference Room XXIV.