(Baton Rouge) –Louisiana fails to provide basic HIV services to thousands of inmates in parish jails, endangering the health of individuals and the communities to which they return, Human Rights Watch said in a report released today.

The 70-page report, “Paying the Price: Failure to Deliver HIV Services in Louisiana Parish Jails,” documents the inadequate, haphazard, and in many cases, non-existent HIV testing, treatment, and linkage to care in the jails. Only a handful of the state’s 104 parish jails offer HIV tests to every inmate on entry, as the US government’s Center for Disease Control recommends. In many jails, HIV treatment is delayed, interrupted, or denied altogether, and continuity of care is disrupted by failure to link HIV-positive prisoners to medical care in the community when they leave the jail. The report was released in conjunction with the Louisiana AIDS Advocacy Network’s Legislative Awareness Day, which brought hundreds of people living with HIV to the Capitol from around the state. 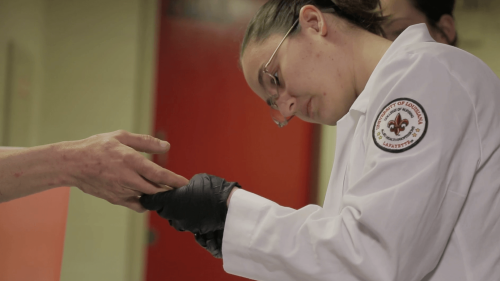 “Louisiana is ‘ground zero’ for two epidemics in the United States, with the highest rate of new HIV infections and an incarceration rate above the national average,” said Megan McLemore, senior health researcher at Human Rights Watch and author of the report. “The lack of treatment affects both people with HIV and the entire community because whoever goes into jail comes back out.”

Many of the people at highest risk of HIV—people who use drugs, sex workers, LGBT people, the poor, and African-Americans and Latinos— are disproportionately represented in jails and prisons. Case workers told Human Rights Watch that they search the jail websites every day for their clients who have disappeared.

In Louisiana, one in seven people with HIV is unaware of their status, yet most parish jails in the state do not offer HIV testing to those who are detained, Human Rights Watch found.  Several jail officials said they don’t conduct routine HIV testing because they can’t afford to treat those who test positive.

“Louisiana spends billions on its prisons but has failed to find the money to test for and treat HIV in local jails,” said McLemore. “This is not acceptable for public health or human rights and creates costlier medical problems down the road.”

One in three people living with HIV in Louisiana falls out of medical care after it begins, and poor linkage to services for those leaving parish jails contributes to this problem. Adherence to medication and continuity of care is crucial to effective treatment of HIV, lowering the amount of virus in the body and reducing the chance of transmission to others. But release from parish jail is often a haphazard process consisting of whatever medications may be left over, a list of local HIV clinics, or nothing at all.

The people interviewed described being locked up for days, weeks, and months without receiving HIV medication, or receiving it only sporadically. “I thought I would die there,” said one person who became seriously ill after 41 days in Orleans Parish Prison without HIV medication.

Many people who described interruptions in their treatment in jail had been arrested for minor, non-violent crimes. Joyce, 54, went to jail three times for shoplifting. “They told me I would have to call my mother to bring me my medications, because the jail would not provide them,” she said. Some people said that their friends or families brought their medications to the jail but they were never delivered.

Human Rights Watch found that the state Department of Corrections (DOC) operates a two-tiered system that neglects HIV services for the nearly 18,000 state prisoners housed in parish jails. Louisiana’s nine state prisons offer access to HIV testing, treatment, and a strong federally funded program for connecting inmates to medical care upon release, yet state prisoners housed in local jails lack access to these programs. The department assumes that jails will identify people with HIV and transfer them to state facilities for treatment, but that does not always happen, even if they disclose their status to jail officials. The Department of Corrections should  ensure that state inmates in parish jails can get HIV services equivalent to those offered in the state prison system.

Many HIV care providers and support agencies said they rarely heard from jail officials or medical staff once their client went to jail, leaving them to simply hope that the client would return after they were released. Darren Stanley, HIV case manager at the Philadelphia Center in Shreveport, said “It’s almost impossible to communicate with the jails while the client is incarcerated or when they are getting out.” One of his clients died of AIDS two weeks after release from a local jail.

Louisiana’s government should continue to carry out criminal justice reforms that promote alternatives to incarceration, which would reduce the fiscal burden on jails for treating chronic conditions while promoting public health, Human Rights Watch said.

“The government is obligated to provide medical care to people living with HIV in parish jails,” said McLemore, “But treatment in the community is a win-win situation for everyone concerned.”