(Berlin) - Traffickers have kidnapped, tortured, and killed refugees, most from Eritrea, in eastern Sudan and Egypt’s Sinai Peninsula, according to dozens of interviewees said Human Rights Watch. Egypt and Sudan have failed to adequately identify and prosecute the traffickers and any security officials who may have colluded with them, breaching both countries’ obligation to prevent torture.

The 79-page report, “‘I Wanted to Lie Down and Die:’ Trafficking and Torture of Eritreans in Sudan and Egypt,” documents how, since 2010, Egyptian traffickers have tortured Eritreans for ransom in the Sinai Peninsula, including through rape, burning, and mutilation. It also documents torture by traffickers in eastern Sudan and 29 incidents in which victims told Human Rights Watch that Sudanese and Egyptian security officers facilitated trafficker abuses rather than arresting them and rescuing their victims. Egyptian officials deny there are trafficker abuses in Sinai, allowing it to become a safe haven for traffickers.

“Egyptian officials have for years denied the horrific abuse of refugees going on under their noses in Sinai,” said Gerry Simpson, senior refugee researcher for Human Rights Watch and author of the report. “Both Egypt and Sudan need to put an end to torture and extortion of Eritreans on their territory, and to prosecute traffickers and any security officials colluding with them.”

Since June 2013, the Egyptian authorities have intensified security operations in Sinai in response to almost weekly assassinations and attacks on police and military officers by Sinai-based groups. Security officials should ensure that their law enforcement operations include identifying and prosecuting traffickers, Human Rights Watch said.

The report draws on 37 interviews with Eritreans by Human Rights Watch and 22 by a nongovernmental organization in Egypt. The people interviewed said they had been abused for weeks or even months, either near the town of Kassala in eastern Sudan or near the town of Arish in northeastern Sinai, near Egypt’s border with Israel. Human Rights Watch also interviewed two traffickers, one of whom acknowledged that he tortured dozens of people. The report also draws on interviews conducted by other nongovernmental organizations outside Egypt who have interviewed hundreds of torture victims, and on statements by the United Nations High Commissioner for Refugees (UNHCR) relating to its interviews of hundreds of such victims.

The victims said the Egyptian traffickers had tortured them to extort up to US$40,000 from their relatives. All of the witnesses interviewed by Human Rights Watch said they saw or experienced abuse by the traffickers, including rapes of both women and men; electric shocks; burning victims’ genitalia and other body parts with hot irons, boiling water, molten plastic, rubber, and cigarettes; beating them with metal rods or sticks; hanging victims from ceilings; threatening them with death; and depriving them of sleep for long periods. Seventeen of the victims said they saw others die of the torture.

Relatives who heard the victims scream through their mobile phones said they collected and wired the vast sums of money the traffickers demanded.

Since 2004, over 200,000 Eritreans have fled repression and destitution at home to remote border camps in eastern Sudan and Ethiopia, dodging Eritrean border guards with shoot to kill orders against people leaving without permission. They have no work prospects in or near the camps and until 2010, tens of thousands paid smugglers who took them through Sinai to Israel.

By 2011, Israel had completed large sections of a 240-kilometer fence along its border with Sinai to keep them out. Since then, traffickers have continued to kidnap Eritreans in eastern Sudan and sell them to Egyptian traffickers in Sinai. Every Eritrean Human Rights Watch interviewed who had arrived in Sinai in 2012 said that traffickers had taken them from Sudan to Egypt against their will.

Human Rights Watch received new reports of trafficking from eastern Sudan to Sinai as recently as November 2013 and January 2014.

Eritreans told Human Rights Watch that Sudanese police in the remote eastern town of Kassala, close to Africa’s oldest refugee camps, intercepted them near the border, arbitrarily detained them, and handed them over to traffickers, including at police stations.

Some of the victims also said that they had seen how Egyptian security officers had colluded with traffickers at checkpoints between the Sudanese border and Egypt’s Suez Canal, at the heavily policed canal or at checkpoints on the only vehicle bridge crossing the canal, in traffickers’ houses, at checkpoints in Sinai’s towns, and close to the Israeli border.

Despite the widespread knowledge of the trafficking in Sinai and the severity of the abuses, senior Egyptian officials have repeatedly denied that the trafficking is taking place. The few who acknowledge possible abuses say there is not enough evidence to investigate.

Both countries’ failure to adequately investigate and prosecute traffickers who severely abuse their victims and the alleged collusion by security officials breaches their obligations under the United Nations Convention Against Torture, international human rights law, and, in Egypt’s case, national and international anti-trafficking laws, Human Rights Watch said.

Egypt should use its increased security presence in Sinai to apprehend traffickers, in particular near the town of Arish, and investigate security officials colluding with them at the Suez Canal and in Sinai. Sudan should investigate collusion with traffickers by senior police officials in and around Kassala, including in police stations.

“Egypt and Sudan are giving allegedly corrupt security officials a free pass to work with traffickers,” Simpson said. “The time has long passed for Egypt and Sudan to stop burying their heads in the sand and take meaningful action to end these appalling abuses.”

When traffickers free Eritreans whose families have paid their ransom, Egyptian border police often intercept the Eritreans and transfer them to military prosecutors and then detain them for months in inhuman and degrading conditions in Sinai’s police stations, victims said. The Egyptian authorities deny trafficking victims their rights under Egypt’s 2010 Law on Combatting Human Trafficking, which says they should receive assistance, protection, and immunity from prosecution.

Instead, the authorities charge them with immigration offenses, and deny them access to urgently needed medical care as well as to the UN refugee agency, UNHCR, which considers refugee claims in Egypt. Egyptian authorities have repeatedly claimed that all Eritreans intercepted in Sinai are illegal migrants, not refugees, ignoring the fact that since mid-2011 most Sinai trafficking victims have been taken from Sudan to Egypt against their will.

Egyptian authorities only release detained Eritreans when they have raised enough money to buy an air ticket to Ethiopia. There, many come full circle, living once again in the refugee camps near Eritrea where they originally registered as refugees.

International donors to Egypt, including the United States and the European Union and its member states, should press Egyptian and Sudanese authorities to investigate and prosecute traffickers and to investigate any collusion by security officials with traffickers.

“It is too late for the tortured trafficking victims who have gone through hell in Sinai,” Simpson said. “But the international community can try to prevent hundreds more Eritreans from falling into the hands of abusive traffickers, while insisting that past crimes should not go unpunished.”

Selected testimony from Eritreans interviewed for the report

“They hung me by my arms, and upside down by my ankles. They beat and whipped my back and head with a rubber whip. They beat the soles of my feet with rubber tubes. They put water on my wounds and then beat them. Sometimes they electrocuted me, burnt me with hot irons, and dripped melted rubber and plastic on my back and arms. They threatened to cut off my fingers using scissors. Sometimes they came into the room, took the women out, and then I heard the women screaming. They came back crying. During the eight months, I saw six others die because of this torture.”

–Human Rights Watch interview with a 17-year-old Eritrean boy, kidnapped in eastern Sudan in August 2011 and transferred to traffickers in Sinai, who abused him for eight months until his relatives paid $13,000.

“They beat me with a metal rod. They dripped molten plastic onto my back. They beat the soles of my feet and then they forced me to stand for long periods of time, sometimes for days. Sometimes they threatened to kill me and put a gun to my head. They hung me from the ceiling so my legs couldn’t reach the floor and they electrocuted me. One person died after they hung him from the ceiling for 24 hours. We watched him die.”

–Human Rights Watch interview with a 23-year-old Eritrean man who was kidnapped by traffickers near Sudan’s Shagarab refugee camp in March 2012 and handed over to Egyptian traffickers in southern Egypt, who took him to Sinai where he was held with 24 other men and eight women for six weeks.

“I arrived in Kassala [in eastern Sudan]. The police stopped me and took me to a police station. They asked me whether I had relatives abroad and I said no. The next morning, the police opened the door and there were two men standing next to them in the doorway looking at me. I speak a little Arabic so I heard a little of what they said. One of the men asked one of the policemen, ‘Do these men have families who can pay us?’ and he said, ‘Yes.’ The next day the police took us to a car parked outside the police station. The same two men were in the car. The police told me to get into the car and the men drove me to the desert about an hour away.”

“At the Suez Canal, the driver told us to get off the bus and we were told to wait in a house, about 150 meters away from the edge of the water. Just after dark, Egyptian police –in blue uniforms –arrived and a little while after a boat arrived. The smugglers put 25 of us in the boat, while the police stood about 50 meters away watching. We crossed the canal. On the other side there were three soldiers, wearing beige dotted uniforms and with small handguns, standing next to some men who looked like Bedouin. While the soldiers watched, the Bedouin loaded us into the back of two civilian pickups and told us to lie down and covered us with plastic.”

–Human Rights Watch interview with a 32-year-old Sudanese man on Egyptian police and military collusion with traffickers at the Suez Canal. He was held and severely abused in Sinai in April 2011. 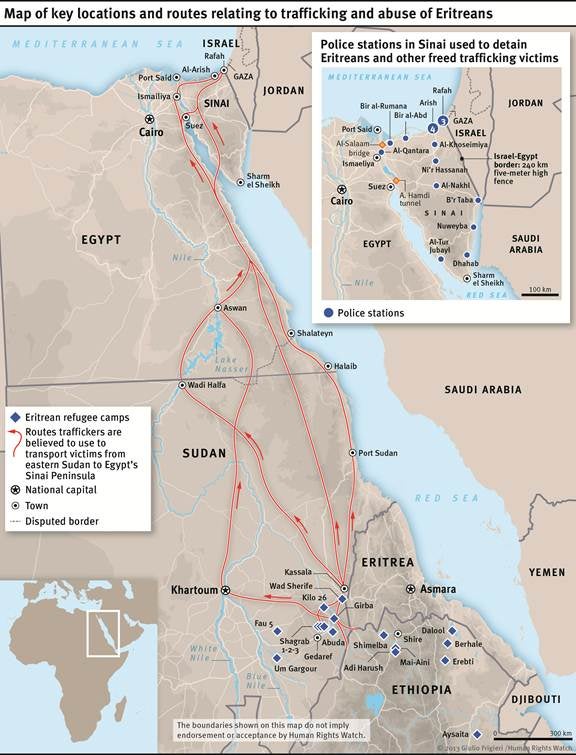