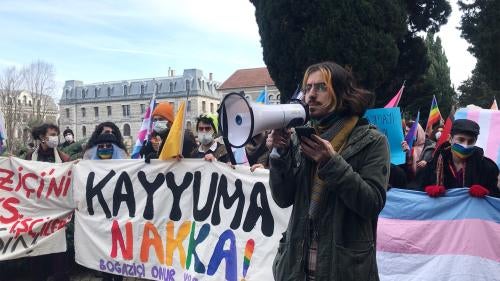 (Istanbul, February 18, 2021) – Turkish authorities have placed hundreds of student protesters under possible criminal investigation, Human Rights Watch said today. The students were arrested during weeks of protests against President Recep Tayyip Erdoğan’s appointment of an academic closely aligned with the government as rector of one of Turkey’s top universities.

Students and the academic staff of Boğaziçi University in Istanbul have exercised their lawful right to peacefully express their opposition to the appointment, which they regard as a move to impose government control over the institution and undermine academic autonomy and freedom.

Voiceover
Police launched a crackdown on protests at Istanbul’s Boğaziçi University, starting in January of this year.

Students and academics mobilized against the Turkish president’s appointment of a new rector, Melih Bulu, calling for his resignation and elections to choose university rectors.

University teaching staff used to elect candidates to be rector, but after the 2016 military coup attempt, President Erdoğan moved to restrict academic autonomy by appointing rectors himself.

Boğaziçi is one of the most respected universities in the country. Its students and staff see the president’s appointment as a political move to control the university and restrict academic freedom.

Police raided the homes of at least 17 students and protesters, arrested them and confiscated cell phones and laptops. Some were strip searched.

Our door was hammered. And my father opened the door and… At that moment, the police and special forces, with all arms all helmet and everything, make them lie on the ground. Three of us, my mother, my father, and me, in five seconds we were all on the ground with gun on our heads.

As the demonstrations went on, government officials called the students terrorists and used transphobic and homophobic slurs against LGBT protesters.

LGBT ... No such thing. This country is national, moral and it will walk to the future with these values.

In the face of our fair demands, our LGBTQI friends are turned into targets since it is easier to agitate the society by using them. In this aspect, their role in these protests is very important to us.

Voiceover
Around the world, people are coming out in solidarity.

But in Turkey, the government is making attempts to ban the student protests using the Covid-19 pandemic as a pretext.

Courts have ordered some people be sent to pretrial detention and put dozens under house arrest.

Hivda Seren
We have a serious political freedom issue in this country. This is a reflection of it. // I’ve been given house arrest so I will not be able to join protests physically for a while, at least until I’m notified. This is a type of imprisonment.

The Turkish authorities should end the crackdown on these protests, release all those in pretrial detention or under house arrest, and respect academic freedom and the autonomy of Turkey’s universities.