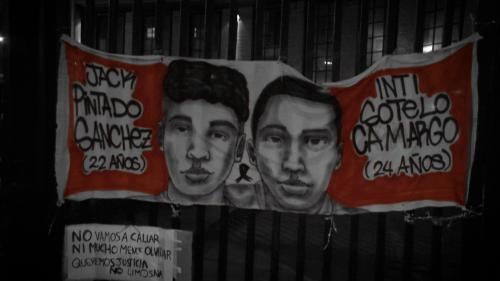 Two protesters were killed and over 200 were injured, some seriously, in the protests, between November 9 and 15. Witness statements and other evidence Human Rights Watch collected indicate that police repeatedly used excessive force against protesters. Injuries apparently caused by the impact of teargas cartridges and videos of police shooting teargas straight into the crowd show that they recklessly used riot guns. In addition, the evidence strongly suggests that officers used 12-gauge shotguns to fire lead pellets and glass marbles directly at people, violating their own protocols, which prohibit those munitions.

Thousands of Peruvians protested for several days after the ousting of president Martin Vizcarra on November 9th , through a questionable legal process. Witness statements and other evidence collected by Human Rights Watch show that police repeatedly used excessive and reckless force against largely peaceful protesters, injuring  as many as 200 and killing two.

Oscar Pintado, Jack Bryan Pintado’s Father
To be honest, I never thought that my son was going to end up dead.

Jack Bryan Pintado Sánchez was killed on November 14 2020. An autopsy revealed 10 lead pellets in his body. We reviewed evidence that strongly suggests police fired glass marbles and lead pellets, in violation of their own protocols.

Oscar Pintado
They [the police] shouldn't have acted that way, because these young men were there because they have a constitutional right that allows them to make themselves heard through these kinds of protests, through a peaceful protest.

At least 10 journalists were also hit by projectiles apparently fired by police, and in 13 cases police either beat them, or tried to confiscate their equipment, according to Peru's National Association of Journalists.

Alonso Chelo
I started to register the advance of the police that was behind me, and the protesters who were in front of me. This is where I get shot in the back.The surgeon took out a glass marble-type projectile. Investigations will determine who did it, but I do have as a point of reference the police agents who were behind me.

Police apparently also deployed tear gas in a reckless and dangerous manner. Witnesses said that instead of shooting upwards, some police officers shot tear gas cartridges straight into the crowd, which can be lethal.

Rubén Guevara, Protester
The police told them [the crowd] that they should vacate San Martín Square. When you stared at the sky, it looked like jets, but it was the tear gas bombs. They threw 12 at the same time. And that created terrible smoke and chaos. And when the policemen saw that we were not giving in, they got closer and closer and closer. And at a distance of 15 meters they began to shoot straight at our faces.

Rubén Guevara
It was here exactly. I had an open wound, and when it burst here it opened up and I had cuts, cuts, cuts, cuts. And I don't know what fell in, but it made a hole in my retina, and right now I can’t see anything.

Policemen
Kill him! Kill him!

Peru’s police disciplinary system lacks independence and transparency. Investigations are underway but a month after the incidents no police officers have been charged or disciplined.

Oscar Pintado
Those who are guilty, should assume their responsibility. We cannot be afraid of the police, this cannot keep happening in our country. The international community must be aware of these cases, and make the government see that it cannot continue shielding, protecting these type of officials.