(New York) – Former detainees and defectors have identified the locations, agencies responsible, torture methods used, and, in many cases, the commanders in charge of 27 detention facilities run by Syrian intelligence agencies, Human Rights Watch said in a multimedia report released today. The systematic patterns of ill-treatment and torture that Human Rights Watch documented clearly point to a state policy of torture and ill-treatment and therefore constitute a crime against humanity. 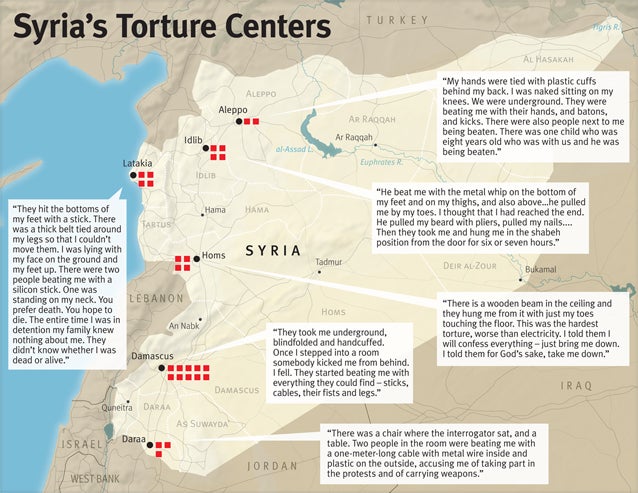 (Embed this map in your blog)

The 81-page report, “Torture Archipelago: Arbitrary Arrests, Torture and Enforced Disappearances in Syria’s Underground Prisons since March 2011” is based on more than 200 interviews conducted by Human Rights Watch since the beginning of anti-government demonstrations in Syria in March 2011. The report includes maps locating the detention facilities, video accounts from former detainees, and sketches of torture techniques described by numerous people who witnessed or experienced torture in these facilities.

“The intelligence agencies are running an archipelago of torture centers scattered across the country,” said Ole Solvang, emergencies researcher at Human Rights Watch. “By publishing their locations, describing the torture methods, and identifying those in charge we are putting those responsible on notice that they will have to answer for these horrific crimes.”

Human Rights Watch called on the United Nations Security Council to refer the situation in Syria to the International Criminal Court (ICC) and to adopt targeted sanctions against officials credibly implicated in the abuses.

The facilities cited in the report are those for which multiple witnesses have indicated the same location and provided detailed descriptions of torture. The actual number of detention facilities used by intelligence agencies is probably much higher.

Almost all the former detainees interviewed by Human Rights Watch said they had been subjected to torture or witnessed the torture of others during their detention. Interrogators, guards, and officers used a broad range of torture methods, including prolonged beatings, often with objects such as batons and cables, holding the detainees in painful stress positions for prolonged periods of time, the use of electricity, burning with acid, sexual assault and humiliation, the pulling of fingernails, and mock execution. Altogether Human Rights Watch documented more than 20 distinct torture methods used by the security and intelligence services.

In most cases former detainees were subjected to a range of these torture methods. A 31-year-old detainee who was detained in Idlib governorate in June described to Human Rights Watch how the intelligence agencies tortured him in the Idlib Central Prison:

They forced me to undress. Then they started squeezing my fingers with pliers. They put staples in my fingers, chest and ears. I was only allowed to take them out if I spoke. The staples in the ears were the most painful. They used two wires hooked up to a car battery to give me electric shocks. They used electric stun-guns on my genitals twice. I thought I would never see my family again. They tortured me like this three times over three days.

Human Rights Watch research shows that the worst torture has taken place in detention facilities run by the country’s four main intelligence agencies, commonly referred to collectively as the mukhabarat:

Each of these four agencies maintains central branches in Damascus as well as regional, city, and local branches across the country. In virtually all of these branches there are detention facilities of varying size.

All of the witnesses interviewed by Human Rights Watch described detention conditions that would by themselves amount to ill-treatment and, in some cases, torture – extreme overcrowding, inadequate food, and routine denial of necessary medical assistance. A graphic model depicting an overcrowded cell described by one former detainee illustrates how the conditions fall short of international legal standards.

The individuals who carried out or ordered crimes against humanity bear individual criminal responsibility under international law, as do those in a position of command whose subordinates committed  crimes that they were aware of or should have been aware of and failed to prevent or punish. This command responsibility would apply not only to the officials overseeing detention facilities, but also to the heads of intelligence agencies, members of government, and the head of state, President Bashar al-Assad.

Because Syria has not ratified the Rome Statute, which created the ICC, the court will only have jurisdiction if the UN Security Council adopts a resolution referring the situation in Syria to the court. Russia and China have previously blocked Security Council efforts to push for accountability.

“The reach and inhumanity of this network of torture centers are truly horrific,” Solvang said. “Russia should not be holding its protective hand over the people who are responsible for this.”

A table with the detention facilities where torture was documented, along with their respective locations, operating agencies, and commanders follows.