Yesterday, in a historic first, a woman referee took charge at the Men’s Football World Cup.

FIFA is keen to celebrate how French referee Stéphanie Frappart and her assistants, Brazil’s Neuza Back and Mexico’s Karen Díaz, adjudicated the match between Germany and Costa Rica, as proof that it is advancing gender equality. Significantly, this historic moment took place in Qatar where authorities treat women as legal minors in their own country.

In a 2021 report, I documented how Qatar’s laws, policies, and practices require women to obtain male guardian permission to marry, study on government scholarships, work in many government jobs, travel abroad unless they marry or turn 25, and obtain certain forms of reproductive healthcare. Men, on the other hand, need no such permission once they turn 18. Many of these rules don’t have any legal basis and are contrary to Qatar’s own constitution which guarantees women’s equality before the law.

Qatar is keen to show it has three female ministers, many high achieving women, and more female graduates than men and claims that in 2010 it was the only country to have a female lead in the World Cup bid. Many women who have broken barriers said they were either lucky enough to do so with the support of their families, or had to fight for approval over their decisions.

Most women told me of the heavy toll such rules have taken on their ability to lead independent lives, including when male guardians denied them permission to drive, travel abroad, study, work, or marry a person of their own choosing. Qatar’s severe discriminatory rules leaves them an outlier even among their own neighbors. 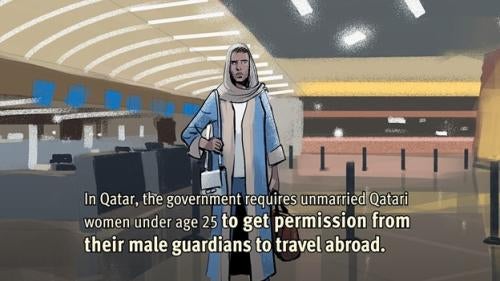 Highly educated women who described themselves as being ‘privileged’ in many ways, found these rules demeaning and a threat hanging over them. Such rules embolden men’s authority over women, which they can use to deny women their rights and even extort them.

“Fatima” said when she needed to get permission from her younger brother so she could travel with their mother, he only provided a one-time exit permit and would not extend it, telling her he wants to “use it [the power] when I want something from mom.”

Qatari women have voiced hope that the World Cup could be a force for good for women, as Qatar has nowhere to hide from the scrutiny. With this historic moment, it’s time Qatar starts treating women as equals and allows all women to make decisions about their own lives.