The Covid-19 pandemic has put Saudi Arabia’s mega-events on hold, but that hasn’t stopped Saudi authorities from confirming a slew of major functions for 2021, including a Formula 1 Grand Prix race. These events are part of a deliberate government strategy aimed at whitewashing human rights violations. Billions of dollars are spent hosting extravagant entertainment, cultural, and sporting affairs to provide a glitzy distraction from the Saudi government’s atrocious human rights record.

On Human Rights Day, December 10, Human Rights Watch is launching the #SaudiRegrets campaign, which seeks to counter Saudi Arabia’s “image laundering” by educating actors, musicians, and athletes courted to play or perform in Saudi Arabia about the country’s rights record. 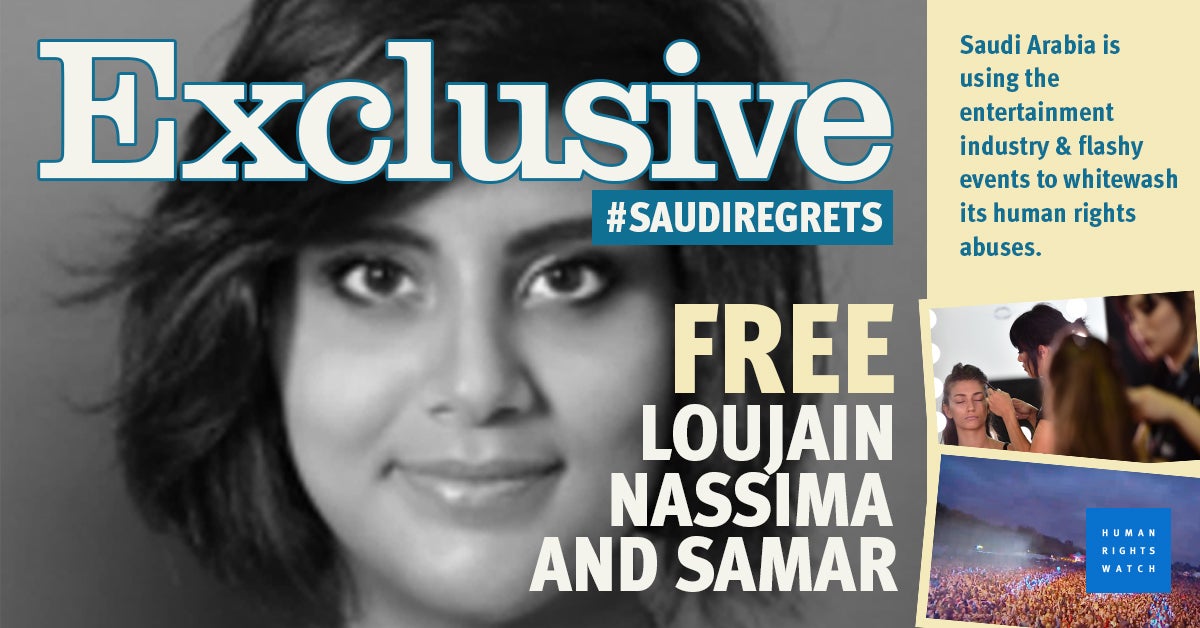 You can help free Saudi human rights activists by pressuring Saudi Arabia and making it harder for them to hide behind entertainment. Nominate a celebrity, musician, athlete, or artist to send their #SaudiRegrets while activists sit in jail.

The #SaudiRegrets campaign also asks celebrity influencers to tell the Saudi government they won’t take its money and participate in events whose primary purpose is to deflect attention from human rights abuses. While the government continues to persecute Saudi human rights defenders and hold women’s activists in detention, stars can send their #SaudiRegrets.

Among the women’s rights activists detained in Saudi Arabia are Loujain al-Hathloul, Nassima Al-Sadah, and Samar Badawi. The charges they face are all related to peaceful political expression and women’s rights advocacy, including calling for the lifting of the country’s driving ban on women, an end to the male guardianship system, and speaking with diplomats, international human rights organizations, and journalists. None have been convicted.

Dozens of prominent influencers and celebrities have performed in Saudi Arabia over the years, including since the brutal 2018 murder of Saudi journalist Jamal Khashoggi, for which there has been no accountability. Some celebrities, such as Nicki Minaj, Emily Ratajkowski, and John Cena, have declined, citing the Saudi government’s terrible human rights record.

You can join Human Rights Watch in demanding that Saudi authorities free detained human rights activists – click here to make your voice heard. As we turn towards the new year, we will continue to hold the Saudi government to account.

Arwa Youssef is a pseudonym used to protect the identity of a Human Rights Watch staff member.