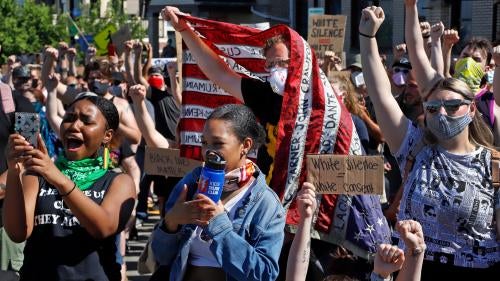 Whoever wins the November 3 presidential election has an opportunity  – and a responsibility – to help the United States move forward by making human rights a priority in the next administration. This includes ending policies that undermine the rights of people in the United States to live in dignity, speak their opinions, have families as they please, put sufficient food on the table, see a doctor without fear of financial ruin, and feel safe in their own skin. For far too long, many people in the country have faced systemic racism and discrimination, often at the hands of their own federal government.

The US should act swiftly to address economic impacts resulting from public health measures to slow the spread of the coronavirus. The Covid-19 pandemic has both highlighted and exacerbated poverty and inequality in the US, disproportionately impacting low-income and informal workers, racial and ethnic minorities, undocumented people, and people already living in poverty. The next administration should work with Congress, state and local governments to adopt comprehensive and effective policies to address unemployment and structural inequalities, including with regard to access to food, housing, quality education, affordable health care, and extended unemployment benefits through the crisis, as well as combat the impacts of excessive and predatory debt and abusive debt collection.

For more on poverty and inequality priorities.

Harms resulting from US policies at the federal, state, and local levels continue to disproportionately impact Black, Indigenous, Latinx, and low-income communities, posing grave dangers to their social and economic well-being. The next administration needs to confront the US history of systemic racial discrimination and support laws and policies that protect the rights of all people and address racial disparities in health, education, housing, employment, and the criminal legal system. The next administration should take all necessary measures to address the serious threat posed by white supremacist extremist groups. It should seek to remove obstacles to accountability for incidents of racial violence, and support reparations to communities most impacted by slavery and ongoing systemic racism.

For more on racial justice priorities.

The US needs to vastly reduce the number of people behind bars – many of whom are detained or imprisoned because of racist laws and policies that for decades have disproportionately affected Black and brown communities. Following the elections, the administration should get behind meaningful criminal legal system reforms that go well beyond those proposed thus far. These need to include reforms that reduce the role of police to address societal problems; investments in communities to advance public safety and equal rights; and independent accountability and oversight mechanisms that advance justice.

The next administration should promote laws, policies, and practices seeking gender equality. Historically, many women and girls have been left out of US successes on rights, especially women of color, women with disabilities, Indigenous women, and female immigrants. Systemic racism, economic and immigration status, age, and one’s address can lead to unequal access to health care, paid family leave, and services for survivors of domestic violence. The next administration should make gender equality and justice a priority, create positions and interagency collaboration to support gender integration, and take specific actions to advance women’s rights to health, economic justice, and a life free of violence.

For more on women's rights priorities.

People fleeing their homes in search of safety have a right to seek asylum, and the US has a long history of helping refugees. The next administration should oppose a deterrence-focused strategy toward migrants that has led to family separations, harsh detention conditions for adults and children, and a dismantling of the US asylum and refugee system. The US should limit excessive surveillance and data collection to enforce borders and should advance reform of an immigration system that has resulted in serious abuses under previous administrations.

Discrimination against LGBT people remains a serious problem in the United States. The next administration should support the Equality Act, which would expressly prohibit discrimination based on sexual orientation and gender identity in education, housing, public spaces, federally funded programs, credit, and jury service. It should also support reauthorization of an LGBT-inclusive Violence Against Women Act that is intersectional and comprehensive and best serves communities at risk. The administration should swiftly reverse the discriminatory ban on transgender people in the military, ensure that sex discrimination protections are LGBT-inclusive and enforce them accordingly, and make certain that religious exemptions are not applied in a way that deprives LGBT people and others of their rights. It should also ensure that LGBT people fleeing persecution in their countries of origin can file asylum claims, in accordance with US and international refugee law.

For more on LGBT rights priorities.

The US should act urgently to realize access to affordable, reliable, and quality internet for all. The Covid-19 pandemic laid bare that the internet is essential to exercising a range of human rights, including freedom of expression and access to information, and to education and an adequate standard of living. The new administration should develop policies that rein in abusive and discriminatory practices by technology companies. It should require greater transparency and hold companies accountable for abuses that result from their practices and underlying business models, while respecting human rights and preserving a free, open, and secure internet. The next administration should give priority to promoting the adoption of a comprehensive data protection law, the absence of which has left people’s data vulnerable to exploitation by government, private companies, and foreign actors, in violation of people’s privacy rights. The new administration should ensure that efforts to automate social protection programs and other facets of public life using data-driven technologies protect welfare rights.

For more on technology and human rights priorities.

The next administration should significantly expand US efforts to address the climate crisis, the impacts of which pose an unprecedented threat to human rights around the world. It should reverse the US withdrawal from the Paris Agreement and adopt and support ambitious measures to transition away from an economy built on fossil fuels to one built on cleaner, low-emitting energy sources. The administration should also reverse rollbacks of and strengthen regulations that protect people from toxic pollution. And it should prioritize support to marginalized populations most affected by climate change and other environmental harms.

For more information on environment and human rights priorities.

The health, safety, and education of millions of children in the US are at risk due to inadequate access to education; outdated laws that result in hazardous child labor; overly punitive juvenile justice systems; and immigration policies that include detention, family separation, and summary expulsion. The next administration should take steps to enhance children’s education by prioritizing digital literacy and universal and affordable internet access, strengthen laws to protect their data privacy, and, when it is safe to return, ensure children stay in school. It should update child labor regulations and work with Congress to amend outdated labor laws that allow children to engage in hazardous work. It should also work with states to reform juvenile justice systems. Additionally, it should end the detention of migrant children, facilitate family reunification, and support legislative reforms that include strict protections for children.

The US should take decisive steps to reverse decades of erosion of worker’s rights protections and implement comprehensive policies to protect the rights of workers to a safe and healthy workplace, a living wage, and overtime; as well as to organize and bargain collectively. Due to inadequate regulation and enforcement, many “essential” and other workers have faced unsafe working conditions  without adequate labor rights protections during the Covid-19 pandemic. In some sectors, particularly in agriculture and food production, disproportionate numbers of workers have contracted the virus and died. The new administration should ensure effective oversight by – and seek adequate funding for – enforcement agencies, promote standards and binding rules that meet international norms, and prioritize the hiring of staff who are experts in workplace safety and workers’ rights.

Older People and People with Disabilities

One in four people in the United States has some kind of disability. Almost 17 percent of the US population is over 65. The next administration should ensure the rights of these populations, which are often among the most marginalized and ignored. The Covid-19 pandemic has laid bare many of the existing shortcomings in policies and implementation related to nursing homes and other residential care facilities, which can lead to neglect and abuse.

The next administration should strengthen enforcement of nursing home regulations meant to protect people, ensure dissuasive penalties for non-compliance with regulations, and ensure nursing home residents can access courts in the event of allegations of harm. Older people and people with disabilities who wish to live at home, rather than in a residential facility, should have the option to do so. This requires policies that ensure uninterrupted access to quality, affordable community-based services.

For more on older people and people with disabilities priorities.