The Bangladesh government should cease the expulsions of Rohingya refugee students from schools and ensure that all children are able to receive a formal education.

“The Bangladeshi government’s policy of tracking down and expelling Rohingya refugee students instead of ensuring their right to education is misguided, tragic, and unlawful,” said Bill Van Esveld, senior children’s rights researcher at Human Rights Watch. “Education is a basic human right. The solution to children feeling compelled to falsify their identities to go to secondary school isn’t to expel them but to let them get the education they deserve.” 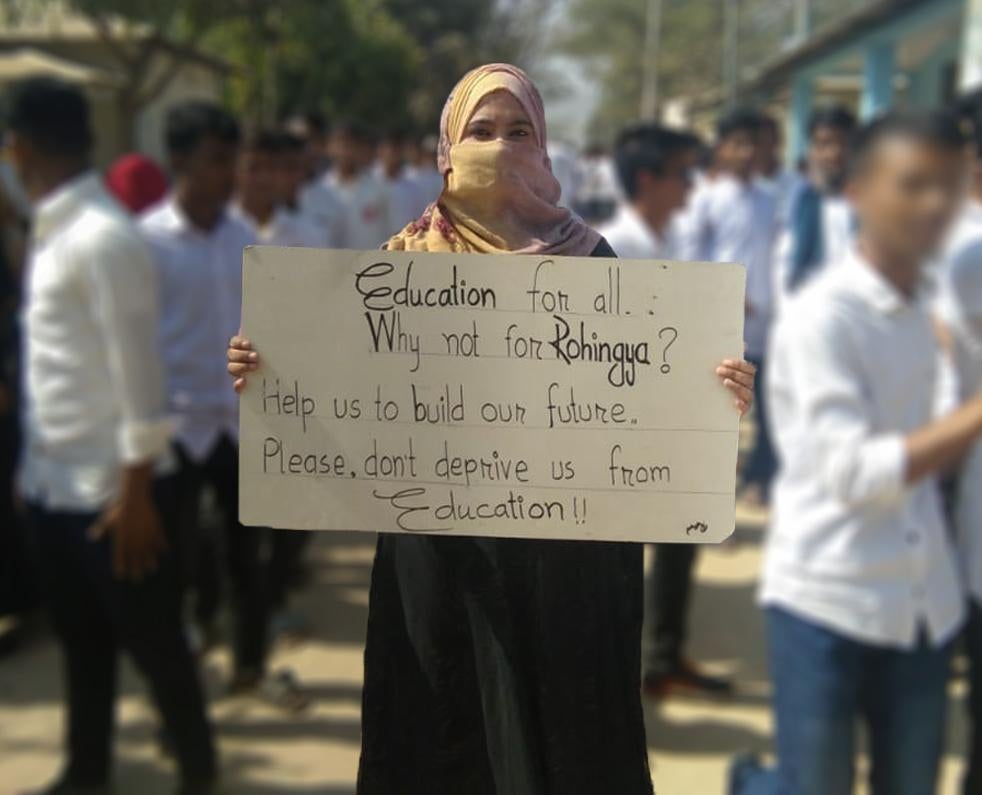 Bangladesh’s government forbids the Rohingya, as well as aid organizations, from setting up accredited schools in the camps where the children live, and also blocks the kids from attending Bangladeshi schools. &#13;

The expelled students were born in Bangladesh after their parents fled Myanmar as refugees in the early 1990s. They were not allowed to enroll in Bangladeshi schools. They attended non-formal primary schools in refugee camps but had no access to secondary education that would let them go to a university or even become an accredited high school graduate. So Rohingya families paid for Bangladeshi birth certificates or obtained other documents to allow their children to pass as Bangladeshi nationals in order to continue their education.

Human Rights Watch interviewed 13 Rohingya refugee students, including 4 girls, who were expelled from six secondary schools on January 23 and 28, and February 14, when school administrators went to each classroom and read out a government-issued notice ordering their expulsion.

The students are among the 34,000 registered Rohingya refugees living in camps in the Teknaf and Ukhiya sub-districts, in Cox’s Bazar. Their legal status is distinct from the 740,000 Rohingya who fled Myanmar since August 2017 and the estimated 200,000 who had escaped previous crackdowns by Myanmar’s military. Bangladesh does not formally recognize these latter groups as refugees or permit them to access any formal education. However, under international human rights law applicable to Bangladesh, all children, including refugees, have an equal right to education.

In November 2018, the Prime Minister’s Office raised concerns about Rohingya children attending Bangladeshi secondary schools, leading to a government investigation. On January 23, the Bangladeshi official responsible for refugee issues in Cox’s Bazar sent a notice to the directors of seven secondary schools in Teknaf and a government official in Ukhiya. The notice, viewed by Human Rights Watch, warns that “the rate of Rohingya students attending school has been increasing,” that “dishonest public representatives” have helped them obtain Bangladeshi documents, and that the number of Rohingya refugees “is increasing day by day.” It also states:

A Rohingya community leader told Human Rights Watch that police, intelligence, and other officials visited four Bangladeshi secondary schools in the Teknaf sub-district on January 15 and 16 and ordered them to expel Rohingya students. The founder of Leda High School said intelligence officials warned him that having Rohingya students was “not safe for the country, not safe for our people,” Reuters reported.

School officials knew which students were Rohingya or could find out by examining their enrollment records for their parents’ names and addresses, parents and refugee leaders told Human Rights Watch.

Bangladesh has provided no legal pathway for Rohingya refugee children to attend school, and prohibits them from receiving formal education in the camps or enrolling in schools outside the camps. One student said his family borrowed and saved for months to pay 3,500 taka (US$42) to buy a Bangladeshi birth certificate. Another said he had to pretend his parents were dead to avoid reporting their refugee camp address on his school application and convinced a Bangladeshi teacher to pretend to be his uncle with a gift of fruit worth 1,000 taka (US$12).

“If education is for all,” said an expelled Rohingya student, “education should be for Rohingya.”

“As long as Rohingya refugee children aren’t able to obtain a formal education in the camps, Bangladesh should allow them to enroll in local schools,” Van Esveld said. “The government should stop thwarting Rohingya students’ right to learn.”

Human Rights Watch spoke to students who had attended Bangladeshi schools for years. Most were in their final year, known as class 10, when they were expelled. Many had excellent academic records and had been encouraged to enroll in secondary schools by their teachers in the camp schools. Many of the teachers in the Bangledeshi schools did not agree with the government order because of the children’s high achievements. “The [secondary school] teachers were upset, they did not want to do it [expel them], but they said this was an order from higher authorities,” said one 18-year-old student known as Shahid S. He added:

The principal came in and said, “You who are Rohingya, please stand up.” No one stood. We were all looking at one another. Then he started reading names, and all of us Rohingya stood up all at once to avoid the shame of it. The teacher put us in a queue and one by one he took our ID cards, our shoulder badges and our bags.

Mohammad M., 18, who attended a semi-private school – which receives some government support but also charges tuition fees – said the headmaster entered his classroom at 11 a.m. on January 28:

He said that if there were any Rohingya, the Education Ministry will cancel the license of the school. When the notice was read out, the headmaster said, “I know who all the Rohingya are. Don’t hesitate, leave your books and IDs here and go.” In the class, in front of the Bangladeshi students, they separated us out, and told us to leave.

Rahim R., 18, was in English class when a vice principal entered and “told the teacher to stop the class,” he said. “They knew who the Rohingya students were and asked us to stand up. ‘From now, you have to go.’ I went to a secret place and I cried. My aim was to be a doctor. What should I do now?” He called his head teacher and asked to return to school but was told, “There is huge pressure on us, so please don’t come back.”

Expelled students protested to the United Nations refugee agency (UNHCR) and tried to meet with Bangladeshi officials, but without success, they said. Aisha A., 17, said her headmaster warned Rohingya students not to return: “Don’t come tomorrow. If you do, we will hand you over to the TNO [Thana Nirbahi Officer, a local civil service executive official]. We face many troubles because of you.”

Nur N., 17, spoke to Human Rights Watch the day after he was expelled from his final year of secondary school:

I was thinking, my father and mother lost many years. They gave me the opportunity to learn even though my father earns only 2,000 taka (US$24) a month. I have wanted to be a doctor since I was very small. I don’t know what I will do now. I couldn’t sleep last night. This may have been the last class of my life.

The vast majority of Rohingya children, including those born in Bangladesh into unregistered families, as well as those who arrived since the military began a campaign of ethnic cleansing in August 2017, are not formally recognized as refugees and face restrictions on access to education.

In addition, there are about 34,000 registered Rohingya refugees living in two official camps in the Cox’s Bazar district, including 8,000 school-age children who are enrolled in schools in the camps. Beginning in the late 1990s, the Bangladesh government allowed Rohingya children who were registered refugees to attend two hours of classes per day with volunteer teachers, but did not allow a formal curriculum. Later, they could attend schools in the camps for registered refugees that are supported by UNHCR.

Since 2007, the government has allowed the schools to teach a version of the Bangladeshi curriculum, but has not accredited the camp schools, which only run through class 8. Refugee children at the camp schools, unlike Bangladeshi students, cannot sit for national examinations or receive official certification that they passed primary school, junior high school, or secondary school.

Government officials say that refugee children are barred from receiving a formal education at schools outside the camps. Without formal education, Rohingya children have no official recognition of their education and no opportunity to apply to universities.

The Rohingya students expelled from secondary schools since January had overcome a haphazard, disruptive educational history in the camps. Initially, in 2007, these children began to study a version of the Bangladeshi curriculum, translated into English, but only from class 1 to class 4 of primary school.

Three students told Human Rights Watch that they had to repeat a year or more of primary school in the camp while waiting for higher-level classes to be opened up. School authorities in the camp also required them to repeat several years of primary school after introducing the Bangladeshi curriculum. One student said that his class was told to repeat their entire first four years of primary school, at which point 40 out of his 60 classmates dropped out. Later, by 2017, the government allowed Rohingya refugee children to pursue schooling up to class 8. Some of the children then paid for Bangladeshi identity documents to continue their education in Bangladeshi schools.

Bangladesh is a state party to the Convention on the Rights of the Child (CRC) and the International Covenant on Economic, Social and Cultural Rights (CESCR), which guarantee children’s rights to free primary education, available and accessible secondary education, and higher education on the basis of capacity, regardless of their immigration or refugee status. The CRC specifies that education should develop respect for a child’s own “cultural identity, language and values, for the national values of the country in which the child is living, [and] the country from which he or she may originate.”

In ratifying the CESCR, Bangladesh declared it would implement the right to education “in a progressive manner, in keeping with ... existing economic conditions.” In April 2018, the UN expert committee that monitors compliance with the covenant called on Bangladesh to withdraw its declarations, and was “deeply concerned” that Rohingya refugees do not have access to education. The UN children’s rights committee has noted that countries facing resource constraints may “progressively” realize the right to education, but also found that “states parties have immediate obligations in relation to the right to education, such as the ‘guarantee’ that the right ‘will be exercised without discrimination of any kind’.”