“We Will Erase You from This Land”

The 221-page report, “‘We Will Erase You From This Land’: Crimes Against Humanity and Ethnic Cleansing in Ethiopia’s Western Tigray Zone,” documents how newly-appointed officials in Western Tigray and security forces from the neighbouring Amhara region, with the acquiescence and possible participation of Ethiopian federal forces, systematically expelled several hundred thousand Tigrayan civilians from their homes using threats, unlawful killings, sexual violence, mass arbitrary detention, pillage, forcible transfer, and the denial of humanitarian assistance. These widespread and systematic attacks against the Tigrayan civilian population amount to crimes against humanity as well as war crimes. 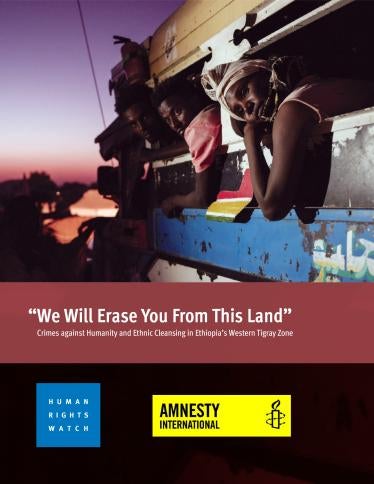