Kabir, a Rohingya refugee, fled his village in western Myanmar’s Rakhine state on August 25, 2017. But this was not the first time he had been forced to flee, nor the first time Myanmar soldiers had burned down his home. Nor is Cox’s Bazar, Bangladesh, where he now lives, the first camp he has sought refuge in.

In August 2017, Myanmar security forces launched a campaign of killings, rape and arson against the Rohingya Muslims in northern Rakhine amounting to crimes against humanity and acts of genocide. More than 730,000 escaped to Bangladesh over the next few weeks.

August 25 has come to be observed by Rohingya as “Genocide Remembrance Day,” but their plight is not the story of a single day, or even a single mass exodus. The roots of August 25, 2017, lie in the decades of state repression and violence that preceded it, orchestrated by successive governments to erode their freedoms and enshrine their vulnerability.

Kabir, now 27, grew up in Rathedaung township. As a teenager, he worked as a day laborer on farms or construction projects.

Kabir had to carry travel permits to pass through security checkpoints to get to work. He was, like almost all Rohingya in Myanmar, denied the citizenship that would recognize his family’s roots in the country. The authorities would harass them on the job, he told us, fining Rohingya workers for missing a day or beating them for making a mistake.

In 2012, he said, things changed. A targeted campaign of hate and discrimination against the Rohingya started across Rakhine state, led by ethnic Rakhine nationalists and Buddhist leaders, stoked by the military and police.

That July, Buddhist monks in Rathedaung issued a statement presenting a plan for the “Arakan Ethnic Cleansing Program” of Rohingya. Violent attacks flared and tensions grew. “Our Buddhist neighbors ostracized us,” said Kabir, identified in this article by only his first name for his security.

By October, Rakhine villagers, often alongside police and soldiers, were burning Muslim homes, destroying mosques, and looting property in townships across Rakhine state.

“For 15 days, they couldn’t set our houses on fire because it was raining,” Kabir said. “But one day, our neighbors along with Buddhists from other areas attacked our village. We tried to fight back but couldn’t. Finally, we fled.”

Kabir’s family ended up in a settlement with other displaced Rohingya in Koe Tan Kauk, or Dunse Para in the Rohingya language, a village tract in Rathedaung along the Bay of Bengal. Rohingya across Rakhine were living under an oppressive regimen, denied freedom of movement and other basic rights.

In October 2016, the ethnic armed group later known as the Arakan Rohingya Salvation Army (ARSA) attacked three police outposts in northern Rakhine state, including one in Koe Tan Kauk. Myanmar military and police responded with brutal “clearance operations,” killing and raping Rohingya and burning down their homes. The authorities arbitrarily rounded up young men, interrogating and torturing them.

Soldiers rounded up all the men and teenage boys from Kabir’s settlement in Koe Tan Kauk and held them at a local military camp. The soldiers separated 12 of them from the group, including Kabir, and took them to a nearby school, where they interrogated them about ARSA and beat them. Kabir said he saw one man’s nails pulled out.

“They took each of us on our own into a room for interrogation,” he said. “Waiting outside you could hear the screams. When it was my turn, they beat me with a stick and military belt at the same time. At one point, one of them kicked me in the genitals, and I fell unconscious.”

The young Rohingya men were held at a pagoda for three days. Some were then sent to the prison in Sittwe, the state capital. Kabir and others were released after paying bribes and signing a paper from their interrogators saying they weren’t tortured.

Soldiers and border-guard police kept the Rohingya camps and hamlets in Koe Tan Kauk under constant surveillance into 2017. Rohingya men and women were barred from fishing or collecting wood; schools remained closed.

On August 25 at about 4 a.m., villagers in Koe Tan Kauk awoke to the sound of gunshots. The military later reported that two of the several ARSA attacks carried out simultaneously that morning had taken place in Koe Tan Kauk. Seven members of the armed group were killed.

Security forces, including the 33rd LID, and local ethnic Rakhine arrived that same morning, shooting at Rohingya villagers who attempted to flee to the forested hills. Some, they captured and slit their throats.

Women and girls were brought to the military camp and raped. Older persons, and people with disabilities, were burned alive in their homes as the entire Rohingya areas of Koe Tan Kauk were torched. 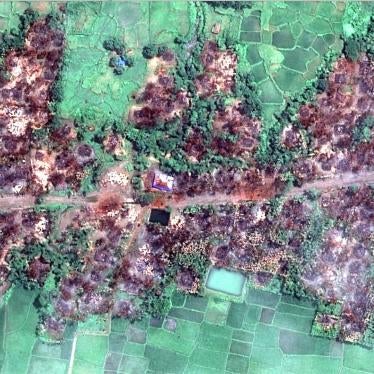 A United Nations Fact-Finding Mission reported later that the Myanmar naval ships stationed just offshore fired weapons at the village. Hundreds were killed. Almost every person from Koe Tan Kauk whom the UN interviewed said he or she had lost at least one family member.

Again, Kabir and his family fled. First to Inn Din, then Bossara, north of Koe Tan Kauk in Maungdaw township.

“From there, we walked for nine days to reach Aley Than Kyaw,” Kabir said, to the beach in southern Maungdaw. The trek took them through the jungle mountains where every day thousands more Rohingya were fleeing, seeking refuge as the military torched their villages and homes.

Kabir paid 100,000 kyat (US$70) a head for his family to cross the Naf River by boat to reach Bangladesh. In Cox’s Bazar, they joined what would become the world’s largest refugee camp.

Four years later they live there still, entirely dependent on humanitarian assistance and his sister’s small income from her work at an aid organization. Nearly a million Rohingya live in the sprawling, overcrowded camps, facing deadly landslides and the risk of disease, fires among the bamboo and plastic shelters, and violence.

An initial welcome by the Bangladeshi government and host communities has been replaced with increasing restrictions on their rights to livelihoods, freedom of movement, and adequate education and health. Bangladeshi authorities are threatening to move an additional 80,000 Rohingya to join the 20,000 refugees already sent to Bhasan Char, a remote, low-lying island that many fear is unfit and unsafe for habitation.

The prospect of Kabir and his family returning safely to Myanmar, meanwhile, has never been more distant. In Rakhine state, 600,000 Rohingya remain trapped in squalid and oppressive conditions amounting to the crimes against humanity of persecution, apartheid, and severe deprivation of liberty.

Since the military coup on February 1 this year, they have lived under an abusive junta led by the same generals responsible for the grave crimes against them.

Those seeking to flee by boat in the Bay of Bengal and Andaman Sea have never faced greater risks, the UN refugee agency recently reported. Rohingya who have reached Thailand, Malaysia, Indonesia or India live on the margins as undocumented migrants, facing constant threat of arrest and detention, or forced return to military-controlled Myanmar.

And everywhere, Rohingya are still awaiting justice. That is what they have been asking for, not just for the past four years, but for decades. They are demanding that those responsible for these crimes against the Rohingya be held to account, and that governments claiming to be in their corner should do all that they can to make that happen.

Myanmar’s military coup has only underscored the devastation that decades of impunity can bring.

“We are losing hope here, too,” Kabir said in Cox’s Bazar. “We were very industrious people in our village. But our fate made us live this refugee life. Still, I have hope that one day we will be able to go back to our village to live with safety and security.”