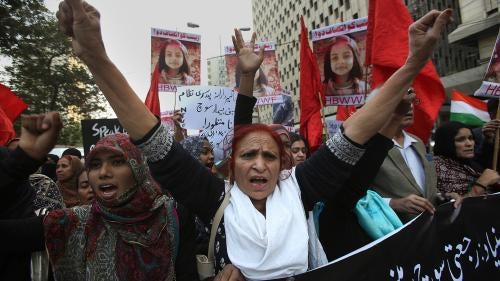 As 2020 drew to a close, protesters across South Asia took to the streets, calling on their governments to take widespread sexual violence against women and children seriously, and to implement real reforms. But rather than listening to experts and activists, some governments reacted with knee-jerk populist calls to execute rapists. Others simply waited for the protests to die down.

As international attention waned, women and children across the region continued to face alarming levels of sexual violence with little support or legal recourse. In February 2021, in a case disturbingly similar to those that sparked protests in October, a group of men reportedly dragged a woman to a field in Jessore, Bangladesh, and gang raped her. In India, on March 1, protests reignited when the body of a 16-year-old Dalit girl was found in Aligarh. Police said they suspected attackers made an attempt to sexually assault the girl before she was killed. In Nepal, protesters returned to the streets after a 17-year-old girl was raped and strangled to death. Her body was found a day later near her village in west Nepal. Some protesters wore black over their eyes to symbolize the government closing its eyes to sexual violence.

International Women’s Day on March 8 should be a reminder to South Asian governments to stop ignoring the region’s rape problem and to start listening to activists. When protests broke out in late 2020, Human Rights Watch spoke with activists across the subcontinent about what governments should do to end widespread violence against women and girls.  The consensus was clear: the death penalty for perpetrators doesn’t solve the problem. Instead, governments should ensure adequate access to health, psychosocial, legal, and support services. They should reform and enforce laws that protect everyone, and train law enforcement and court officials to work with and support victims of gender-based violence. Schools should provide comprehensive sexuality education to address sex, consent, gender equity, and healthy relationships.

This International Women’s Day, governments should believe women saying there is a problem, and listen to their solutions.