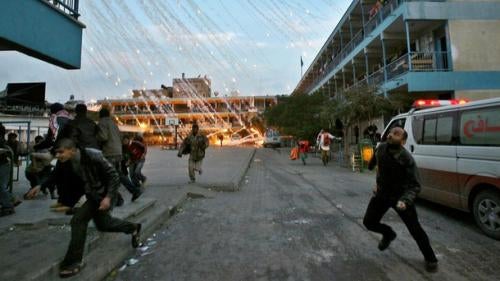 “While victims endure the cruel effects of incendiary weapons, countries endlessly debate whether even to hold formal discussions on the weapons,” said Bonnie Docherty, senior arms researcher at Human Rights Watch and associate director of armed conflict and civilian protection at the International Human Rights Clinic. “Countries should recognize the long-term suffering of survivors by addressing the shortcomings of existing international law.”

The report is based on extended interviews with survivors, witnesses, field doctors and nurses, burn specialists, and other experts, as well as in-depth research published in medical journals. It includes case studies from Afghanistan, Gaza, and Syria.

Incendiary weapons inflict excruciating burns, sometimes to the bone, and can cause respiratory damage, infection, shock, and organ damage. Over time, extensive scarring tightens muscle tissue and creates physical disabilities. The trauma of the attack, the painful treatment that follows, and appearance-changing scars lead to psychological harm and social exclusion.

The inadequacies of health care available in armed conflict settings exacerbate the already difficult process of treating serious burns. Long-term disabilities, the cost of medical care, and the loss of property associated with incendiary weapons, have adverse socioeconomic impacts.

Protocol III to the Convention on Conventional Weapons (CCW), adopted in 1980, regulates incendiary weapons, which produce heat and fire through the chemical reaction of a flammable substance. But two notable loopholes limit the protocol’s effectiveness. First, its design-based definition excludes certain multipurpose munitions with incendiary effects, including those with white phosphorus. Second, its restrictions on ground-launched incendiary weapons are weaker than those for airdropped models.

Countries party to the treaty have expressed concerns about the use of incendiary weapons for many years, but they should dedicate discussions on the adequacy of Protocol III, Human Rights Watch and the Harvard International Human Rights Clinic said.

The CCW’s annual meeting was scheduled to be held from November 11-13, 2020 at the United Nations in Geneva. Due to new pandemic-related restrictions, however, the meeting was reportedly postponed, just days before it began.

While the UN has not yet set a new date for the CCW annual meeting, countries should use the intervening time to build support for action on incendiary weapons, Human Rights Watch and the Harvard clinic said.

Over the coming months, CCW states parties should agree to set aside time at the treaty’s five-year Review Conference, scheduled for late 2021, to evaluate the adequacy of Protocol III and start a process to close the protocol’s loopholes.

“Many governments have shown an interest in an in-depth assessment of Protocol III’s limits,” Docherty said. “The small number of countries blocking the way should recognize the humanitarian imperative of reviewing and revising this outdated convention.”

Afghanistan
Eight-year-old Razia was severely burned when white phosphorus shells from an undetermined party to the conflict crashed into her family’s mud-brick home in an Afghan village on March 14, 2009. Despite receiving treatment at a US military hospital at Bagram Air Base, she has permanent scars that have caused ongoing physical and psychological harm.

“Razia cried a lot because she was in pain,” said Capt. Christine Collins, Razia’s trauma nurse at Bagram. “This whole thing had taken over her life at such a young age.” Collins added in her personal capacity: “With those types of weapons, there has to be some kind of control. Absolutely, one hundred percent.”

Gaza
On January 4, 2009, three 155mm artillery shells containing white phosphorus fired by Israeli forces amid hostilities with Palestinian armed groups, smashed through the roof of the Abu Halima family’s home in northern Gaza. The fire from the white phosphorus immediately killed five members of the family and injured five more.

“Everything caught fire,” said Sabah Abu Halima. “My husband and four of my children burned alive in front of my eyes; my baby girl, my only girl, melted in my arms. How can a mother have to see her children burn alive? I couldn’t save them. I couldn’t help them.”

Syria
Syrian government forces dropped an incendiary weapon on a school in Urum al-Kubra on August 26, 2013.

“It honestly looked like a scene out of Armageddon,” said Dr. Rola Hallam, who treated the victims. “Their clothes were hanging off them. They had the awful smell of singed flesh added to a weird chemical synthetic smell…. It was very clear they had severe burns.”

Muhammed Assi was severely scarred, with burns on 85 percent of his body. “[W]henever I left the house, I would come back after five or ten minutes because I did not want someone to stop me in the street and ask, ‘Why is your body like that? What are those burns?’” He added, “The hard part is my little nephew is scared to come near me, my other nephew who always used to hug me is scared to play with me.”