(Bangkok) – The Cambodian authorities should stop arbitrarily arresting, harassing, and threatening activists who participated in and organized protests on the anniversary of the Paris Peace Agreements on October 23, 1991, Human Rights Watch said today. Governments that signed the landmark accords should publicly defend Cambodians facing attacks for calling for the implementation of provisions on democracy and rights.

On October 26, 2020, Prime Minister Hun Sen threatened the family of Ho Vann, an exiled former lawmaker with the banned opposition Cambodian National Rescue Party (CNRP), after October 23 protests marking the 29th anniversary of the Paris Peace Agreements in Phnom Penh. “You [Ho Vann] are a rebel leader who is living overseas,” Hun Sen said. “Stop leading others to jail. While you are living free overseas, your family is in Phnom Penh… You are crazy. Be careful – your wife and children cannot sleep well and must be frightened. If you can stop, you should stop.” Hun Sen also alleged that he personally had been spying on the Zoom calls of CNRP members in which protest activities had been discussed.

“It is bad enough to arrest peaceful protesters, but it is an assault on basic decency for Hun Sen to threaten family members, including children,” said Phil Robertson, deputy Asia director. “Prime Minister Hun Sen set the tone for abuse by threatening those planning to protest the failure of the government to keep its promises on rights and democracy in the Paris Peace Agreements.”

On October 23, opposition activists, relatives of detained activists, and others demonstrated in front of the Chinese, French, and US embassies to hand in petitions calling in part for the Cambodian government to respect the Paris Agreements. District security forces, uniformed police, and plainclothes officers dragged protesters away from the embassies. The authorities blocked delivery of the petition to the Chinese embassy and arrested three members of the CNRP.

The three CNRP activists arrested were Ton Nymul, 37, Lim San, 57, and Yory Sreymom, 52. Two days later the Phnom Penh municipal court charged them with incitement to commit a felony and ordered their pretrial detention. Four security officers hauled away Sath Pha, the cousin of detained opposition activist Heng Sothy, by her limbs outside the Chinese embassy. Sath Pha had been injured on July 31 when officers dragged her across a street during a protest. 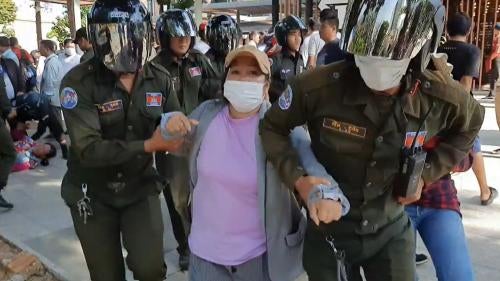 During the October 23 protests, the authorities also threatened and harassed journalists reporting for independent media outlets, including Reuters and VOD News, demanding that they stop interviewing people, cease taking photos, and halt Facebook livestreams of the protests. Police also demanded that journalists delete any footage taken or their cameras would be confiscated. Security force members tried to intimidate several journalists by forcefully pushing them.

“Journalists at protests should be allowed to do their jobs without being threatened or assaulted,” Robertson said.

Chin Malin, spokesperson for the Justice Ministry and the governmental Human Rights Committee, stated on his Facebook page that the Paris Agreements were no longer valid and that the government only cracked down on people committing crimes that threatened national security and public order.

The Cambodian government has ramped up its persecution of opposition activists in 2020. Currently, over 30 opposition activists are in prison based on politically motivated charges. For instance, on October 22 the authorities rearrested Sou Yean, a CNRP activist in Tbong Khmum province, for alleged incitement. The authorities have not clarified the reasons for his arrest, but on October 23, he had called on activists to join the protests in Phnom Penh. The Tbong Khmum provincial court charged him on October 23 and ordered his pretrial detention in Kampong Cham provincial prison. Sou Yean had already spent a year in prison in 2019 on a bogus incitement conviction.

“Foreign governments and United Nations agencies should immediately and publicly condemn Hun Sen’s threats,” Robertson said. “As prime minister he is responsible for the behavior of police who use unnecessary force against opposition activists and other peaceful protesters.”