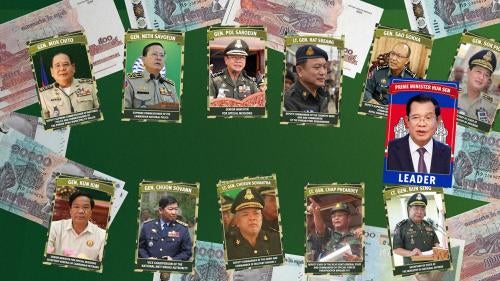 (New York) – Cambodia’s increasingly dictatorial, one-party rule is underpinned by generals in the security forces who are responsible for serious and systematic human rights violations, Human Rights Watch said today as it issued the Khmer-language version of its 284-page report, “Cambodia’s Dirty Dozen: A Long History of Rights Abuses by Hun Sen’s Generals.” Human Rights Watch also released a video showing some of the unexplained wealth of these generals and their family members.

The report spotlights 12 senior security officers who form the backbone of an abusive and authoritarian political regime. Since 2018, three of the 12 have been promoted and one has died.

Each of these officers owes his high-ranking and lucrative position to political and personal connections with Hun Sen dating back two decades or more. Each has demonstrated a willingness to commit rights abuses on behalf of Hun Sen. Instead of serving the public, these officials have acted to protect the rule of Hun Sen, who has been in power for more than 35 years. Throughout their careers, they have served in government positions paying modest official salaries, yet they have amassed large amounts of unexplained wealth.

“Over the years, Hun Sen has created and developed a core of security force officers who have ruthlessly and violently carried out his orders,” said Brad Adams, Asia director. “The importance of Cambodia’s generals has become even more apparent with the massive crackdown in the past two years against journalists, political opponents, and anti-government protesters.”

Human Rights Watch has long documented Hun Sen’s egregious human rights record. Over more than three decades, hundreds of opposition figures, journalists, trade union leaders, and others have been killed in politically motivated attacks. Although in many cases those responsible for the killings have been known members of the security services, in not one case has there been a credible investigation or prosecution, let alone a conviction. In some cases, triggermen or fall guys have been prosecuted, while their superiors go untouched. Security forces have also arbitrarily arrested, beaten, harassed, and intimidated many other critics of the government, including human rights workers, labor activists, land rights activists, and bloggers and others expressing their views online.

Hun Sen has orchestrated his repressive rule by promoting people based on loyalty to him instead of the military, gendarmerie, and police institutions they formally serve.

The report details the responsibility of 12 senior security force officers for human rights abuses in Cambodia from the late 1970s until the present. Below are the positions each held in 2018 and any changes since then:

Although these officials have a legal responsibility to represent the state instead of a political party – and to carry out their duties in an impartial and neutral manner – all have acted in an openly and highly partisan manner. Each is a member of the CPP Central Committee, the party’s highest policymaking body. Members of the Central Committee are required to carry out all party policies. This conflicts with international human rights standards, which protect the rights of members of security forces to be members of a political party, vote, and privately express their opinions. However, officials should not be politically partisan in carrying out their professional duties or favor one political party over others.

A Long History of Rights Abuses by Hun Sen’s Generals

Like Hun Sen, several of these senior officials were members of the Khmer Rouge regime, which between April 1975 and January 1979 was responsible for the deaths of an estimated 1.2 to 2.8 million Cambodians.

Hun Sen has been Cambodia’s prime minister since 1985. Since 2015, he has been chairman of the ruling Cambodian People’s Party, which has been in power since 1979. He is now among the world’s five longest-serving autocrats. In public, he talks about himself in the third person and has tried to create a cult of personality, including naming hundreds of schools (many donor-financed) after himself. His official title in Khmer is “Samdech Akka Moha Sena Padei Techo Hun Sen,” which literally translates to “princely exalted supreme great commander of gloriously victorious troops.” He has called himself the “five-gold-star general to infinity.”

“No dictator reaches or stays at the top without the support of other ruthless people,” Adams said. “Underneath Hun Sen are a core group of generals who abuse and intimidate Cambodians with the same contempt towards pluralism and democracy that Hun Sen has exhibited throughout his 35 years in power. Like their boss, they need to be called out and held accountable for their many crimes.”