(Bangkok) – The Cambodian authorities should stop harassing and forcibly dispersing family members protesting the detention of opposition political activists, Human Rights Watch said today. Relatives of detained Cambodian National Rescue Party (CNRP) activists have protested in front of the Phnom Penh municipal court for seven Fridays in a row, since June 19, 2020. They have handed in petitions to Phnom Penh-based foreign embassies and the Office of the United Nations High Commissioner for Human Rights (OHCHR) in Cambodia.

On the morning of July 31, Khan Prampi Makara security forces blocked protesters from reaching the municipal court, grabbing and pushing them to the ground. At about 9 a.m., officers apprehended Sath Pha, a cousin of Heng Sothy, a detained CNRP activist. They dragged her across the street and forcibly put her into a police car from the Prampi Makara District Administration Unified Command Committee, headed by the district governor.

“Videos of police dragging peaceful protesters on the street and forcibly jamming them into vehicles should raise global concern for police abuse in Cambodia,” said Phil Robertson, deputy Asia director. “The authorities should immediately end violent tactics against peaceful protesters and respect the rights to free expression and assembly.” 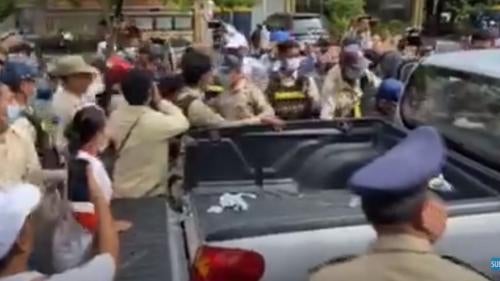 Video footage shows police officers pushing and dragging Sath Pha into the vehicle. She was taken to the police station, questioned, and released after she signed a pledge not to join marches and protests in the future. “After I thumb-printed [the pledge], I told them that I will keep marching until the 17 [CNRP activists] are released,” Sath Pha told Human Rights Watch. On August 5, Sath Pha filed a complaint with the Phnom Penh court against the Khan Prampi Makara district security forces.

On the morning of July 24, a large presence of mixed security forces confronted the family members of the detained opposition activists gathered in front of the Phnom Penh municipal court and tried to move them away. The security forces violently confiscated one protester’s sign. Security officers in civilian clothes with walkie-talkies roamed the area, taking photos of protesters and bystanders. 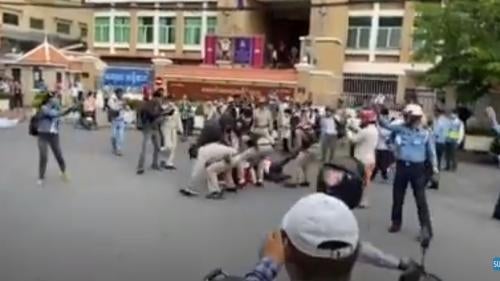 After the incident on July 31, the US embassy in Phnom Penh condemned the harassment and reminded the government of “Cambodian people’s constitutional right to democracy and fundamental freedoms.”

“More foreign governments should join the US in calling on the Cambodian government to respect the rights of peaceful protesters,” Robertson said. “Seeking justice for one’s wrongfully detained relatives is not a crime.”

International human rights standards limit the use of force to situations in which it is strictly necessary. The United Nations Basic Principles on the Use of Force and Firearms by Law Enforcement Officials provide that law enforcement officials should apply nonviolent means before resorting to the use of force and firearms. The peaceful protest actions by the family members did not warrant the use of force.

On June 1, Prime Minister Hun Sen claimed without providing any evidence that the CNRP was trying to use the Covid-19 pandemic to “cause chaos.” He threatened CNRP activists with arrest, repeating, “If you act, I will arrest.”

The CNRP leader, Kem Sokha, remains on trial for unsubstantiated treason charges, although in mid-May, the authorities said that his trial would be delayed indefinitely. On July 20, the Phnom Penh court warned him to not violate the conditions of his bail, which prohibit him from any political activities.

Prime Minister Hun Sen also used the pretext of Covid-19 to quickly pass a draconian state of emergency law in the National Assembly. The law has yet to be invoked. Should an emergency situation be declared, the law would permit blanket suppression of the rights to freedom of expression, association, and assembly. This includes allowing the government to monitor private communications and silence independent media outlets. The law also would grant unfettered martial powers to the government. A state of emergency must be renewed every three months – but such renewals can occur indefinitely.

The Cambodian government has also drafted a repressive Public Order Law, which seeks to police people’s actions and appears to criminalize a vast array of public and private behavior.

“Prime Minister Hun Sen is once again brutally cracking down on peaceful protesters, ignoring the pleas of family members whose relatives have been arbitrarily detained,” Robertson said. “Foreign governments and donors should respond to the petitions from the opposition party members’ relatives and speak up for those peacefully expressing their views.”