(Beirut) The Iraqi government is denying thousands of children whose parents have a perceived Islamic State (also known as ISIS) affiliation of their right to access an education, Human Rights Watch said today. The children, who were born or lived in areas under the control of ISIS between 2014 and 2017, lack the civil documentation the Iraqi government requires for school enrollment and the government is making it difficult for them to acquire it.

A September 2018 document signed by senior Education Ministry officials endorsed a discussion that appears to allow children missing civil documentation to enroll in school. But officials are instructing school principals and aid groups providing support services for education that undocumented children are still barred from enrolling in government schools.

“Denying children their right to education because of something their parents might have done is a grossly misguided form of collective punishment,” said Lama Fakih, acting Middle East director at Human Rights Watch. “It undermines any potential government efforts to counter extremist ideology by pushing these children to the margins of society.” 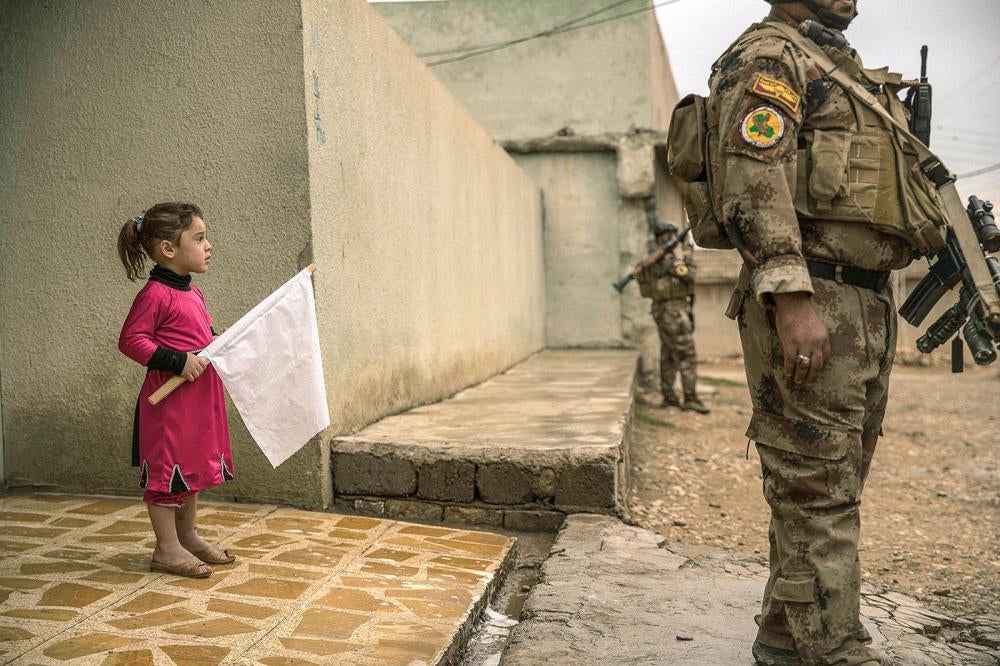 At the peak of the fighting between Iraqi forces and ISIS in 2017, at least 5.8 million people had been forced to flee their homes. Dozens of camps sprang up across Iraq to house the displaced, and as fighting subsided some families started to go back home. But many remain displaced and those returning home face significant challenges.&#13;

Iraq: Not a Homecoming

An aid worker coordinating an education program in Nineveh and three school principals there told Human Rights Watch that ministry officials told them that despite the September 2018 decision, as of January 1, 2019 students could only attend school if their parents pledged in person at their governorate’s General Directorate of Education that they would obtain their child’s civil documentation by the end of the school year or within 30 days of making the pledge.

The principal of a primary school adjacent to a camp for displaced families 30 kilometers southeast of Mosul said that the ministry instructed schools to expel students whose parents failed to carry through on their pledge. At least 1,080 children of school age are living in the camp next door to the school, camp management told Human Rights Watch, but only 50 of these children, all with valid documentation, were enrolled at the school.

The principal of a school in a camp 30 kilometers south of Mosul said that since 2018 he had been allowing all children in the camp to enroll but that after he received the ministry’s new instructions, “at least 100 kids stopped coming to school. Either their parents couldn’t afford to go to Mosul to make the pledge, or they didn’t see the point because they knew that they would not be able to get civil documentation for them within 30 days.”

A 13-year-old girl who had been in 6th grade at the school said she had to stop attending in January. Her mother has no death certificate for the girl’s father who, the mother said, joined ISIS and died, and thus cannot get her daughter a valid identity card. “I like to learn and I want to keep studying and become a teacher but I don’t know if I will be allowed to,” her daughter said.

Many families who lived under ISIS rule between 2014 and 2017 are missing one or more of the civil documents schools are requiring parents to provide to enroll these children. Human Rights Watch interviewed more than 20 families whose children could still not enroll in school for this reason after the September 2018 decision. It could not identify any families missing documentation who were able to enroll their children in school.

When in control of territory, ISIS regularly confiscated Iraqis’ civil documentation and issued their own, which the Iraqi authorities do not recognize. Iraqi security forces also confiscated some families’ documents as they fled fighting or when they arrived at camps for displaced people. Families whose children were born in ISIS-run hospitals have faced difficulties obtaining birth certificates and all subsequent documentation for their children, particularly if the husband is dead, missing, or detained. Authorities ask women to provide a valid death or divorce certificate in order to issue them and their children documentation, which most women in that situation do not have.

Ten women in that situation said that under those circumstances, neighborhood mukhtars, government-paid community leaders, have to sign off for security forces to grant the security clearances required to apply for civil documentation for the mother and subsequently the child. However, a mukhtar from Sinjar, an area in Nineveh governorate ISIS formerly controlled, said that security forces there had ordered him and other mukhtars not to stamp women’s documents if their husbands had joined ISIS unless the woman went before a judge and opened a criminal complaint against her husband for his ISIS membership. He said that not all women have been willing or able to do that.

As a result, many women married to men who joined ISIS have not been able to obtain divorce or death certificates. Government forces have even threatened them with arrest or other forms of collective punishment when they tried to obtain civil documentation. A woman from the town of Qayyarah, Nineveh, said that when she presented her 3-year-old son’s ISIS-issued birth certificate at the local civil status directorate in early 2018 in an effort to get a state-issued birth certificate, an official tore it up. “He said to me, we won’t give your son a birth certificate, his father was ISIS,” she said.

An upcoming joint study by the Norwegian Refugee Council, Danish Refugee Council, and International Rescue Committee, “Paperless People of Post-Conflict Iraq: Denied rights, barred from basic services and excluded from reconstruction efforts,” revealed another barrier for some families. They found that officials at some schools have been requiring not only the child’s documentation, but also various types of civil documentation for the parents, including their identity cards, or the death or divorce certificate of a parent not present.

Even those children who have valid documentation because they were born before ISIS took control in 2014 may be excluded by schools that demand these documents if their father is no longer present and their mother has no divorce or death certificate.The joint study found that nearly half of the families interviewed could not enroll their children in school without presenting the father’s civil identity card or death certificate.

On July 26, Human Rights Watch wrote to the Iraqi government asking for clarification on the government’s position on whether children missing civil documentation are able to enroll in school but has received no response.

In addition to their fundamental obligation to guarantee the right to education to all children, free from discrimination, governments should adopt measures to ensure education is not interrupted during humanitarian crises, Human Rights Watch said.

Article 18 of the Iraqi Constitution stipulates that all children born to an Iraqi father or mother shall be granted citizenship and are therefore entitled to identity documents. Parliament should amend or revoke other laws and policies in force that thwart this constitutional right and Parliament should consider enacting a proposal submitted in June by the parliamentary human rights committee for the judiciary to set up special courts to issue civil documentation to children of families with perceived ISIS affiliation. In any case, Iraq should remove requirements for families to obtain security clearance from security services as a prerequisite for obtaining civil documentation.

To ensure that children can enroll by September 15, the beginning of the school year, the Education Ministry should urgently notify all school staff not to require civil documentation as a condition for enrolling, taking examinations, or obtaining certificates until a procedure is in place facilitating the issuing of civil documentation for all Iraqi children. The ministry, working with aid agencies, should seek to notify parents living in areas formerly under ISIS control and in camps for displaced people that the civil documentation requirements have been waived.

“Some Iraqi children lost three years of education under ISIS.” Fakih said. “The government should be doing everything in its power to ensure that children do not miss any more years of crucial education.”