African governments should ensure the right to education for all girls by ending discrimination against those who are pregnant or have children, Human Rights Watch said today ahead of the United Nations International Day of the Girl Child.

This year’s theme, “With Her: A Skilled GirlForce, ” has particular importance for Africa, where governments are forcing tens of thousands of girls to drop out of school prematurely and failing to teach them adequate skills.

“Africa cannot have a skilled workforce if authorities throw girls out of school because they are pregnant,” said Agnes Odhiambo, senior women’s rights researcher at Human Rights Watch. “When girls get a quality education, they gain the skills and knowledge they need to achieve their potential and transform their lives, families and communities.” 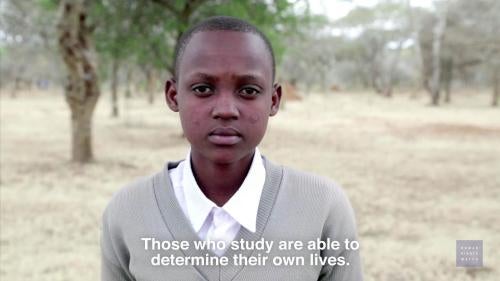 In Equatorial Guinea, Sierra Leone, and Tanzania, government and school officials deny pregnant girls the right to attend school. Elsewhere in Africa, governments are not doing enough to ensure that adolescent mothers resume their education after pregnancy.

In 2013, African Union member countries unanimously adopted Agenda 2063, a continent-wide economic and social development strategy. Under this strategy, African governments committed to build Africa’s “human capital,” which the AU terms “its most precious resource,” through sustained investments in education, including “elimination of gender disparities at all levels of education.”

In 2017, the African Commission on Human and Peoples’ Rights and the African Committee of Experts on the Rights and Welfare of the Child called on African countries to put in place measures to achieve equal access to education for girls and boys. They jointly stated that, “it is compulsory … to facilitate the retention and re-entry of pregnant or married girls in schools.” In 2018, the AU called on member countries to “Leave No Child Behind for Africa’s Development.”

Although many African governments have made strong commitments to guarantee that pregnant girls and young mothers can attend school, girls face many difficulties in enrolling and remaining in school, and excelling academically, Human Rights Watch said. Many teenage mothers are not in school because of poor implementation and weak monitoring of national re-entry policies. Pregnant girls and young mothers are often stigmatized or rejected, have little to no support from their family or school, are condemned by government officials, face economic hardship, and are sometimes exposed to exploitation and violence. These problems present barriers to girls who are trying to continue their education.

Discriminatory government policies often regard education for adolescent mothers as a privilege that can be withdrawn as a punishment. In June 2018, Burundi – a country with widespread sexual violence with near-total impunity – reversed its policy protecting girls’ right to education regardless of pregnancy, their marital status, or motherhood. Burundi’s education minister in June 2018 banned the boys who get the girls pregnant as well as the girls themselves – including those forced into marriage – from going to formal public or private schools. A month later, under unclear circumstances, the minister lifted the ban.

In some countries, adolescent mothers are expected to transfer to technical and vocational centers, which often charge tuition fees and provide poor-quality training. Human Rights Watch has found that female students are very often limited in the technical subjects they are allowed to study in these centers.

The African Union should not tolerate discrimination against pregnant girls and adolescent mothers. It should press all member countries to end, in policy and practice, the expulsion of female students who become pregnant or get married. Governments should ensure girls get the support they need to remain in education, including through small accommodations – for example, giving students time for prenatal checks (where those cannot happen outside class time), time to breastfeed during breaks, and time off in case her child is ill or to comply with other medical or bureaucratic requirements.

African governments should also adopt a comprehensive approach to girls’ education, and address the many factors that lead to teenage pregnancies and difficulties that prevent girls from getting an education. The steps governments should take include eliminating primary and secondary school fees and providing financial support for at-risk and highly vulnerable girls; and strengthening the quality of education provided in public schools, including through effective teacher training.

Governments should also ensure that schools have systems to protect students’ safety; and provide adolescents with access to comprehensive sexual and reproductive health education and services at school and in the community, as well as birth control. Governments should also provide information to parents, guardians, and communities about the benefits of educating girls.

“Banning pregnant girls from schools is counterproductive and contrary to African governments’ international legal obligations,” Odhiambo said. “Ensuring that all girls benefit from quality education, free from discrimination, is critical for building a skilled female workforce for Africa’s development.”