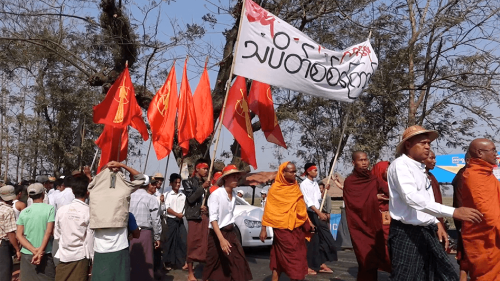 When a group of high school and university students staged a play at a peace conference in Burma early this January, they never imagined that they would end up in prison.

The play, performed at a gathering of civil society organizations, satirically criticized those who supported the ongoing conflict between the Burmese military (the Tatmadaw) and ethnic armed groups. According to the lead organizer of the drama, “the message of our drama is that we don’t want wars.”

After a video of the performance was posted online, a lieutenant-colonel in the army filed a criminal complaint accusing the students of defaming the army and, on January 25, nine students were charged with criminal defamation. They now face up to three years in prison.

According to a police officer quoted in the media, the lieutenant-colonel lodged the complaint because the play, which included jokes about military wives having affairs while their husbands were away, “could disgrace and destroy the image of the Tatmadaw” and their families.

The Criminalization of Peaceful Expression in Burma

The charges against the students were filed under section 66(d) of the 2013 Telecommunications Act, a provision adopted by the then-military-controlled Parliament that criminalizes the use of a telecommunications device to “extort, threaten, obstruct, defame, disturb, unduly influence or intimidate” another person. Use of the provision has risen dramatically since the new government, dominated by Daw Aung San Suu Kyi’s National League for Democracy (NLD), took office, with at least 54 cases filed and eight people sentenced to prison in the past year. While section 66(d) is only one of three laws that criminalizes defamation in Burma, it is the only one for which bail can be denied pending trial.

The law is so vague and overbroad that seemingly any criticism of government officials or the military can lead to arrest, detention without bail, and prosecution. Concern over the breadth of the law is so great that a recent article in The Huffington Post on military commander-in-chief Min Aung Hlaing carried a warning that sharing the article on social media in Burma would result in arrest and prosecution under section 66(d).

With this and other laws being used to suppress dissent, the sense of disillusionment among activists who supported the NLD during its years in the wilderness is palpable. To be clear, only some of these cases have been filed by NLD members or on the instructions of NLD officials. Many are being filed by the military or its allies, perhaps as a test of the NLD’s resolve and commitment to an open society. But the NLD has taken no visible steps to halt these attacks on freedom of expression.

The NLD’s 2015 election manifesto included a promise to “revoke legislation that harms the freedom and security that people should have by right.” Many of those who voted for the party hoped that, at a minimum, people would no longer be going to jail for expressing their opinions. To their disappointment, that has not been the case.

Some are translating their disappointment into action. Maung Saung Kha, who served six months in prison after being convicted under section 66(d) for “defaming” former president Thein Sein in a poem, is spearheading a new civil society group campaigning for amendment or repeal of the law. On January 23, he and other activists, lawyers and journalists held a protest against the law in Yangon’s Maha Bandoola Park. Although U Soe Thein, director general of the communications department at the Ministry of Transportation, announced on April 11 that the ministry was discussing possible amendments to section 66(d), there is no indication that the ministry intends to end criminal prosecutions for peaceful speech and end the misuse of defamation and other military-era laws.

In opposition, Daw Aung San Suu Kyi and the NLD would have agreed with this simple proposition: no one should go to jail for insulting or criticizing a public official. The question is what they believe now that they share power with the military.

Burma’s Parliament, which is dominated by the NLD, should move quickly to repeal all laws that criminalize peaceful expression, including the criminal defamation provisions in section 66(d), the Penal Code and the News Media Law. Pending repeal, Daw Aung San Suu Kyi should instruct her party members not to file any cases under the kinds of laws that once imprisoned thousands, including more than 100 current NLD members of Parliament, and President Htin Kyaw should make it clear that if the military or others file such cases it will be a waste of time, as he will pardon all those charged.

Until the ruling party acts to put an end to the arrests, harassment, and imprisonment of those who speak critically of the government or the military, the hopes of those who have long supported them will remain unfulfilled.