(Dushanbe) – The Tajikistan government has shortchanged hundreds of families resettled to make way for a large-scale hydroelectric dam, Human Rights Watch said in a report released today. Despite government commitments to comply with international standards on resettlement that protect the rights of those displaced, it has not provided the necessary compensation to displaced families to replace their homes or restore their livelihoods. Many families have suffered serious disruptions in access to housing, food, water, and education.

The 81-page report, “‘We Suffered When We Came Here’: Rights Violations Linked to Resettlements for Tajikistan’s Rogun Dam,” examines serious shortcomings in the government’s resettlement of 1,500 families since 2009. The Rogun Dam and Hydropower Plant stands to displace over 42,000 people before it is operational. The major problem, people said, was that they were not given enough compensation to replace their homes. In addition, many people were not able to get land in their new communities that they needed for agriculture and livestock to supplement their incomes, and some new communities did not yet have schools.

“The Tajikistan government has taken some important steps for a smooth resettlement process, but many families have struggled to build their homes, feed their families, and send their children to school,” said Francesca Corbacho, Europe and Central Asia fellow at Human Rights Watch and author of the report. “Because thousands of families are yet to be resettled, the government has a crucial opportunity to fix the process to make sure that respect for human rights goes hand in hand with economic development.”

Tajikistan, a mountainous country in Central Asia, suffers from acute energy shortages during the winter months, which can be bitterly cold. During the winter, the government supplies electricity for only a few hours a day in rural areas. The government says the dam project has the potential to improve Tajikistan’s energy supply and could bolster the country’s economy by allowing it to sell surplus electricity. There is no announced completion date for the Rogun Dam. The World Bank estimates that it will take Tajikistan 16 years to fill Rogun’s reservoir.

The Tajikistan government made a commitment to respect the World Bank’s standards on involuntary resettlement. While providing some important protections, these standards are insufficient to provide effective protection for all human rights. The World Bank has not promised funding for the dam but since 2011 has commissioned a number of assessments to assist the government.

On June 17, 2014, as the report was going to press, the World Bank published the final draft of these assessments and its own paper outlining key issues relating to the project. It acknowledged that the need to resettle a large number of people would be a major impact of building the Rogun Dam, that the project would result in economic – as well as physical – displacement, and that restoring livelihoods during and after resettlement would be a critical element of the resettlement process. In the past the World Bank has supported large-scale dam projects elsewhere that resulted in serious human rights abuses.

The Human Rights Watch report is based on research in Tajikistan from November 2013 to February 2014, including 156 interviews with people who have been resettled, were in the process of resettling, or will be resettled. The government has resettled families from low-lying areas and areas near the dam construction site to villages created to resettle them, some as far as 200 kilometers away. The families typically are assigned a plot of land in the new village and use government compensation to build new homes.

All land in Tajikistan is the property of the state, but under national and international standards, anyone resettled by the government is entitled to fair and adequate compensation for property losses and to have their livelihoods restored.

The government has not made agricultural land available in all resettled communities. As a result, families have had to spend more money on food and have lost livelihoods dependant in part on agriculture and livestock. Even when agricultural land is available in resettlement villages, the government has not given resettled families adequate information about its availability or how to apply for it.

Khorsheed (not her real name), a mother of five, told Human Rights Watch that when she resettled she lost her vegetable garden and orchard and was compelled to sell her cattle due to the lack of grazing lands. “Now my children beg me to give them fruit,” she said. “I have to try to distract them with sweetened tea…. The children [also] want milk and [now] I have to buy it. I don’t have money and so I can’t buy that much.”

Many resettled families also faced serious difficulties in finding long-term employment. Unemployment rates are high across Tajikistan, and hundreds of thousands of people work abroad for several months a year. However, for resettled families, the problem of the lack of jobs is exacerbated by the lack of land for agriculture and low compensation awards. Some residents said they had not migrated for work since beginning construction on their new houses because they did not want to leave their families in unfinished buildings.

“Resettled families who have lost farms, orchards, and pastures have also lost a major part of their ability to maintain their livelihoods,” Corbacho said. “The government has a responsibility to make sure that the standard of living doesn’t drop for people it forces to resettle.”

Some resettled communities do not yet have a local school, despite World Bank and other standards requiring completion of schools before residents resettle. Many children in these villages have to walk for up to two hours to attend classes in neighboring villages. Parents and children resettled to Dangara district also reported that school officials forced children to pick cotton during the harvest season, sometimes taking them out of class to do so.

Access to secondary school for girls is a challenge in many parts of the country. But Human Rights Watch found that resettlement, particularly when schools were far away, has in some cases worsened the problem.

“Because resettlement sites are often more than 100 kilometers from their original villages, resettled families often have little choice but to live in their new communities for months as they build their homes, even without a school or other facilities.” Corbacho said. “The government should promptly provide local schools in all resettlement sites so that children’s education is not disrupted.”

In villages closest to the Rogun Dam construction site where people still live while awaiting resettlement, frequent blasting has shattered windows and caused other damage to homes. Although workers typically use cars or buses to evacuate residents during blasting, elderly or disabled residents are forced to remain in their homes if vehicles are not available, putting them at risk of serious injury from rock falls and blast shocks.

The Tajikistan government should make sure the livelihood of anyone who is resettled will be restored, Human Rights Watch said. The government should re-evaluate its process for calculating and paying compensation to people it resettles to reflect the replacement cost of homes, make farmland readily available, and promptly provide services such as water, electricity, and education. The authorities should also closely monitor conditions for resettled residents, paying particular attention to marginalized groups such as female-headed households and people with disabilities.

“Tajikistan’s efforts to increase access to energy are not in question,” Corbacho said. “But the government needs to make sure its resettlement program doesn’t deprive people of their livelihoods.” 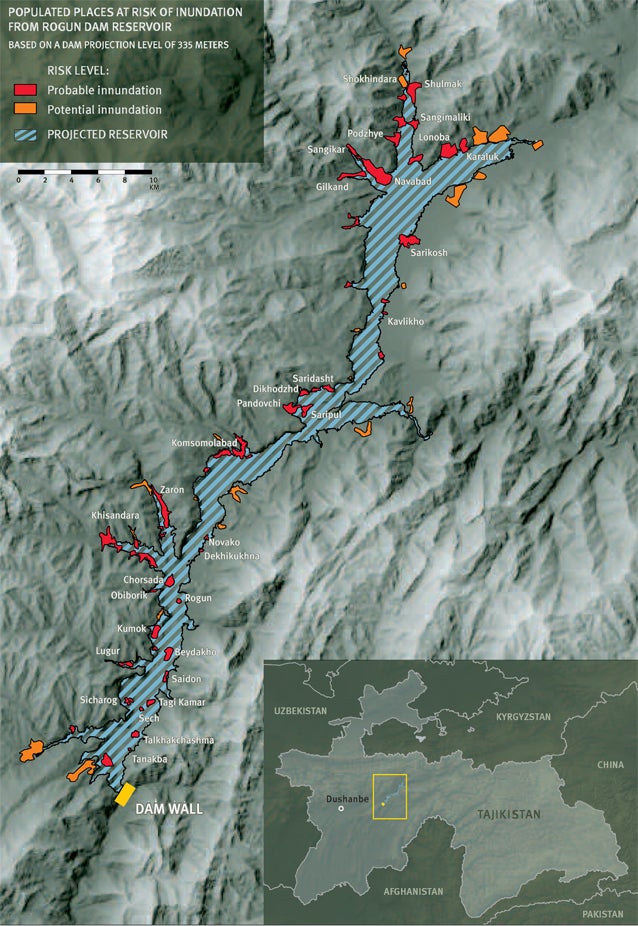 Selected accounts from “‘We Suffered When We Came Here’: Rights Violations Linked to Resettlements for Tajikistan’s Rogun Dam”:

Khorsheed G., Resettled to Dangara Region
Khorsheed G., a mother of five who moved to the resettled community in Dangara in 2013, said – as did others interviewed – that keeping animals had been an insurance policy of sorts for times of financial crisis. She said that following resettlement, her family faced significant financial hardships because of the absence of land for agriculture and livestock:

Now when we need money, my husband’s brothers send it from Russia, but we can’t always ask them for it. Sometimes we ask neighbors for loans, which we have to pay back. In Nurabod we didn’t have to borrow money … because we had everything in our garden, and we had the livestock. With the livestock, at any moment we could sell it alive or sell it for meat. That really helped us.

Now my children beg me to give them fruit. It’s gotten very hard without the garden, the orchard, [and] the livestock. All the things that we were used to.… The dried fruit was good, and sweet. Now I have to try to distract my children with sweetened tea [instead of giving them fruit]…. [N]ow we have to go to the bazaar and pay [for] even the most elementary things. The children want milk and I have to buy it. I don’t have money and so I can’t buy that much.

Saghar F., Resettled to Rudaki Region
Saghar F., a mother of three young children who was interviewed in Rudaki, said that having to send her son to school in a neighboring village because the resettlement site had no school is a daily source of anxiety:

My oldest [7 years old] studies in the school…. I worry about him the whole time that he is walking…. He studies until 5 p.m. and by 6 p.m. when he gets home it is completely dark…. When the weather is bad, I try not to send him. He sometimes cries so much because he doesn’t want to go. When it rains his feet get soaked. And he cries a lot.

Hurmoz T., Resettled to Rudaki Region
Many resettled residents told researchers that they quickly exhausted compensation payments on material for initial stages of construction and had to spend from their own limited income or sell assets such as livestock or vehicles to buy and transport materials such as stones, cement, and roofing to the resettlement site. Hurmoz T., who works part-time as a taxi driver around his resettled community in Rudaki, said,

I got 60,000 somoni (US$12,500) compensation. I had to sell everything of value – all my animals, my car – to complete our house…. In the old place, we had a house with six rooms. Here, we have only two rooms [for eight people]…. [T]he compensation was enough to build only one small room.