(Berlin) – Poland’s Justice Ministry should drop all charges against the abortion rights activist Justyna Wydrzyńska and stop targeting reproductive rights defenders, Human Rights Watch said today. Wydrzyńska is accused of helping a woman in an abusive relationship access pills for a self-managed medication abortion in 2020. She is being prosecuted for assisting someone to have an abortion and illegally “marketing” medication without authorization.

The prosecution of Wydrzyńska is part of the government’s sustained attack on sexual and reproductive rights including access to abortion, and is designed to further curb Poland’s already extremely restricted abortion access. In this hostile environment, women and girls rely on civil society initiatives to provide access to evidence-based sexual and reproductive health care and information. A hearing in Wydrzyńska’s case will take place on July 14, 2022 in Warsaw’s Praga Południe District Court.

“Dragging a woman’s rights activist into court on accusations of helping a domestic violence victim shows just how far Poland’s government will go in its crusade to stop women and girls from exercising their reproductive rights,” said Hillary Margolis, senior women’s rights researcher at Human Rights Watch. “Tomorrow, anyone could be in Justyna Wydrzyńska’s place, and no one should have to risk being charged with a crime for helping women get essential health care.”

This is the first known prosecution in Europe of an abortion activist for allegedly providing abortion pills. Wydrzyńska is part of Abortion Dream Team, which works to destigmatize abortion in Poland and provide information and support to people seeking abortion.

The first hearing on April 8 in Wydrzyńska’s case was postponed when key prosecution witnesses failed to appear. This included the domestic violence survivor’s husband, who had reported his wife’s intent to terminate her pregnancy to police. His wife had allegedly contacted Wydrzyńska in early 2020 saying she could not travel outside of Poland to procure an abortion due to her husband’s controlling and abusive behavior, ultimately leading to the charges against Wydrzyńska.

At the April 8 hearing, representatives from human rights groups were barred from entering the courtroom. In contrast, the judge permitted the ultra-conservative organization Ordo Iuris to join the prosecution as a “social interest party” to defend the rights of the fetus, although a fetus has no legal personality, status, or rights under Polish law. A number of human rights organizations have submitted third party interventions in support of Wydrzyńska.

In October 2020, Poland’s politically compromised Constitutional Tribunal ruled that abortion on grounds of “severe and irreversible fetal defect or incurable illness that threatens the fetus’ life” is unconstitutional, virtually eliminating legal abortion in the country. Previously, over 90 percent of the approximately 1,000 legal abortions performed annually in Poland were on this ground. Abortion is now only permitted to safeguard a woman’s life or health or if the pregnancy results from a crime, such as rape or incest. In practice, multiple barriers make it almost impossible for those eligible for a legal abortion to obtain one.

The World Health Organization (WHO) says that medication abortion is a safe, non-invasive method that can be self-managed up to the twelfth week of pregnancy. Medicines recommended for use in medication abortion – mifepristone and misoprostol – are included on the WHO’s essential medicines list.

In addition to halting Wydrzyńska’s malicious prosecution, the Polish government should urgently reverse track and ensure that anyone can access safe and legal abortion and all essential reproductive health care services within the country, Human Rights Watch said.

Evidence consistently demonstrates that laws restricting or criminalizing abortion do not eliminate it, but rather drive people to seek abortion through means that may put their mental and physical health at risk and diminish their autonomy and dignity. 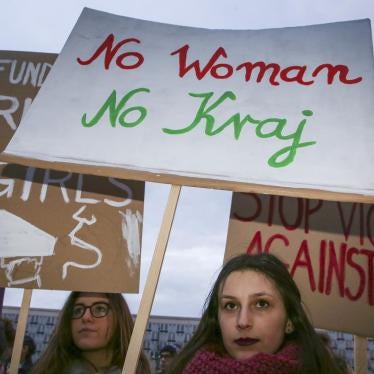 Since Poland’s ruling Law and Justice party came to power in 2015, women’s rights defenders have come under repeated attack by high-ranking government officials, ultra-conservative groups, and the media. Groups including the Abortion Dream Team have been the targets of bomb and death threats due to their work supporting women’s rights and the right to abortion.

United Nations special mandate holders raised concerns that prosecuting Wydrzyńska is intended to scare those helping women and girls access safe abortion in Poland. They called on the Polish government to decriminalize abortion, ensure access to medication abortion, and stop attacks on human rights defenders, noting that “women human rights defenders in Poland are being prosecuted for acts that should never be a crime.”

The International Federation of Gynecology and Obstetrics (FIGO) and members of European Parliament have said that Poland’s government should drop all charges against Wydrzyńska and ensure safe access to sexual and reproductive health care. The organization also said that Poland should fully decriminalize abortion.

The European Parliament adopted a resolution on July 7 calling for inclusion of the right to abortion in the European Union Charter of Fundamental Rights and urging EU member states to decriminalize abortion and ensure safe, legal access. Over 110,000 people have signed an Amnesty International Urgent Action petition calling on the authorities to drop charges against Wydrzyńska.

“Prosecuting Justyna is another cynical and vicious attempt by Polish authorities to cut off all avenues to safe abortion care through fear-mongering,” Margolis said. “Instead, the government should use its resources to ensure that everyone in Poland can get the sexual and reproductive health care they need, and help others do so, without risking a prison sentence.”