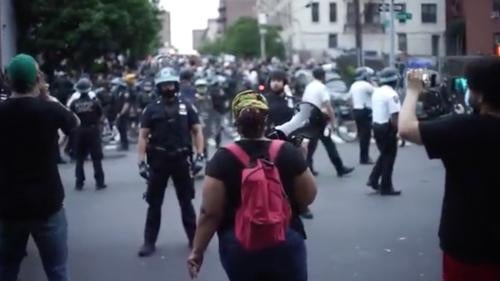 Update: NYPD Chief of Department Terence Monahan announced on February 25th that he will retire from his position.

“There is no question that the NYPD engaged in a pattern of excessive, brutal, and unlawful force against peaceful protesters,” James said in a press release. “No one is above the law – not even the individuals charged with enforcing it.”

The lawsuit specifically charges the NYPD, the City of New York, Mayor Bill de Blasio, NYPD Commissioner Dermot Shea, and NYPD Chief of Department Terence Monahan with responsibility for the police violating the rights of protesters this summer by failing to take adequate measures to prevent police violence. “For at least the last two decades, the NYPD has engaged in the same unlawful excessive force and false arrest practices while policing large-scale protests,” the lawsuit read. It accuses de Blasio, Shea, and Monahan of having knowledge of this prior abuse but acting with “deliberate indifference” to it.

In September, Human Rights Watch published a 99-page report focused on one of the dozens of incidents covered in the lawsuit: the NYPD’s June 4 planned assault on protesters in Mott Haven, a low-income, majority Black and brown neighborhood in the South Bronx that has long experienced police brutality and systemic racism. A video produced by Human Rights Watch and Situ Research reveals how the NYPD – with no provocation or warning – surrounded, trapped, assaulted, and arrested over 250 protesters. The report built upon the work of organizations like Bronx Defenders, Brooklyn Defender Services, the Center for Constitutional Rights, Communities United for Police Reform, the Legal Aid Society, the New York Civil Liberties Union, and many others that have been documenting NYPD abuse for decades.

The operation in Mott Haven was led by Monahan, the NYPD’s highest-ranking uniformed officer, while Commissioner Shea spread misinformation about the protest and its organizers that other city officials debunked or contradicted.

On Sunday, January 17, Mott Haven families will be holding a press conference and a march to the NYPD’s 40th Precinct to demand justice for the assault on peaceful protesters in violation of their constitutional and human rights.

The attorney general’s lawsuit may help hold the NYPD and the city to account for the Mott Haven assault, other abuses against protesters this summer, and changes to practices going forward. It seeks a court order setting aside the policies that led to the abuses, a declaration that the defendants’ conduct towards protesters was unconstitutional, and a requirement for training and monitoring as necessary to ensure lawful conduct going forward.

These changes will have some positive impact, but to genuinely improve public safety and protect people’s rights, policy makers should move beyond superficial reforms – such as more de-escalation and anti-racial profiling trainings – that have failed to change the culture of policing, address systemic racism, or improve accountability for police misconduct.

Human Rights Watch and other rights groups have long called for the creation of independent accountability systems that provide a genuine check on police misconduct, as well as structural changes to reduce the police role in addressing societal problems, both in New York City and across the United States. This should include shifting resources from policing to investments in communities that improve access to housing, education, health care, and employment opportunities.