(New York) – Indian authorities continue to impose harsh and discriminatory restrictions on Muslim-majority areas in Jammu and Kashmir, one year after the revocation of the state’s constitutional status on August 5, 2019, Human Rights Watch said today. The government’s unwarranted restraints on the rights to free speech, access to information, health care, and education have been intensified by the Covid-19 pandemic. On August 3, 2020, the authorities issued an order restricting movement for two days to prevent “violent protests” against last year’s decision to revoke constitutional autonomy.

Anticipating unrest after the government revoked Jammu and Kashmir’s autonomous constitutional status and split it into two federally governed territories, the Indian authorities imposed broad restrictions on freedom of movement, banned public meetings, shut down telecommunication services and educational institutions, and detained thousands of people. While in the months that followed the government eased some restrictions, hundreds of people remain detained without charge, critics are threatened with arrest, and access to the internet is limited.

“Indian government claims that it was determined to improve Kashmiri lives ring hollow one year after the revocation of Jammu and Kashmir’s constitutional status,” said Meenakshi Ganguly, South Asia director at Human Rights Watch. “The authorities instead have maintained stifling restraints on Kashmiris in violation of their basic rights.” 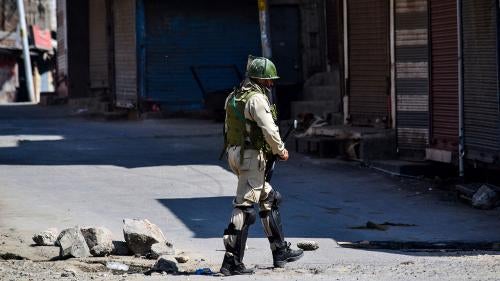 Prominent political leaders, including three former chief ministers, were among the thousands detained to prevent protests. Police told the courts that 144 children had also been taken into custody. While most of those held have since been released, according to the Jammu Kashmir Coalition of Civil Society, based on habeas corpus petitions over 400 people remain in custody under the draconian Public Safety Act, which permits detention without trial for up to two years.

There also have been several allegations of new arrests, torture, and ill-treatment by security forces. The government has also used harsh counterterrorism and sedition laws to clamp down on peaceful critics. On June 29, 2020, the authorities accused Mubeen Shah, a businessman, of sedition after he criticized the government for attempting to alter the Muslim-majority demographic status of Jammu and Kashmir by lifting residency restrictions.

In April, the police opened criminal investigations against Gowher Geelani and Peerzada Ashiq, both journalists, and Masrat Zahra, a photojournalist, contending that their social media posts or reporting were “anti-national.” On July 31, editor Qazi Shibli, previously held under the Public Safety Act, was questioned and detained.

In June, the government announced a new media policy in Jammu and Kashmir that empowers the authorities to decide what is “fake news, plagiarism and unethical or anti-national activities” and to take punitive action against media outlets, journalists, and editors.

The policy contains vague and overbroad provisions that are open to abuse and could unnecessarily restrict and penalize legally protected speech. International law provides that restrictions on freedom of expression must be necessary for a legitimate purpose, such as the protection of national security, public health, or the rights of others, and strictly proportionate to achieve that end.

The government crackdown adversely affected livelihoods, particularly in the tourism-dependent Kashmir Valley, Human Rights Watch said. The Kashmir Chamber of Commerce and Industries estimated that the first three months of a lockdown to prevent protests since August 2019 cost the economy over US $2.4 billion, for which no redress has been provided. Losses have nearly doubled since the government imposed further restrictions to contain Covid-19 in March.

Doctors have complained that the lack of internet was hurting the Covid-19 response. “It is a new virus – research, studies, guidelines and updates are changing every other day,” said one doctor. “The internet helps doctors to keep a tab on developments around the world, but we cannot access video lectures or other information in the absence of high-speed internet.”

Soon after students returned to classes following the lifting of restrictions on movement, the government announced the Covid-19 lockdown. Without proper internet, students are often unable to attend online classes. “The impact on education has been particularly severe,” the Human Rights Forum for Jammu and Kashmir noted in its report on human rights violations since August 2019, saying that since the lockdown to contain Covid-19, “The limiting of networks to 2G has made it impossible for online classes to function adequately. Graduate students and teachers have been unable to participate in conferences or have their papers published, causing willful harm to their careers and violating the rights to education.”

“Even as the pandemic is forcing the world to address discrimination and inequality, the Indian government is persisting with its repression of Kashmiri Muslims,” Ganguly said. “The government should reverse its abusive policies and provide remedies for those whose rights were violated.”