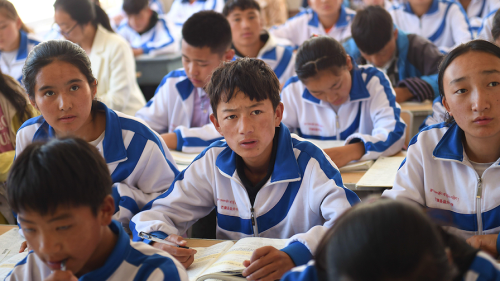 A year ago February, authorities in the highly restrictive Tibet Autonomous Region of China picked up Tsering Dorje, who lived in a village near Mt. Everest. They held him for a month in what they told him was a “reeducation facility,” where he says he was interrogated and beaten.

Dorje’s “crime”? A phone call with his brother, who lives outside China, in which they discussed the importance of Tibetan language instruction for their children. The local police who had intercepted the call told his family that such a conversation was a “political crime.”

Since the 1960s, Chinese has been the language of instruction in nearly all middle and high schools in the region, where nearly half of Tibetans live. But new Human Rights Watch research shows that practices introduced over the last decade by the regional government are leading more primary schools and even kindergartens to use Chinese as the teaching language for Tibetan students. This appears to have become the norm for primary schools in Tibetan urban areas and the practice is spreading to the countryside.

Chinese authorities’ hostility toward ethnic and religious minorities is well-documented. One key feature of Beijing’s notorious “political education” camps in the western region of Xinjiang — where about 1 million Uighurs and other Turkic Muslims are arbitrarily detained — is mandatory Chinese language study. The government of China’s president, Xi Jinping, has provided ample evidence of its intent to hollow out distinct cultures through repression and persecution and remake the residents into loyal servants of the Chinese Communist Party.

China formally introduced a policy of “bilingual education” in 2010 for schools in all minority areas in China, an approach to minority education considered appropriate internationally when it promotes competency in both the local and the national language. The official position of the regional authorities is that both the Tibetan and Chinese languages should be “promoted,” leaving individual schools to decide which language to make a priority as the teaching medium.

But those schools are increasingly staffed by non-Tibetan-speaking teachers, have virtually no Tibetan textbooks and have isolated the use of Tibetan to Tibetan-language classes. As a former part-time teacher from Lhasa, the capital of the Tibetan Autonomous Region, told Human Rights Watch: “In primary school, the Tibetan teachers … have a strong urgency to teach Tibetan, but the biggest problem is that they lack methods and materials.”

Other policies have contributed to the demise of education in the Tibetan language. In “mixed classes” non-Tibetan pupils are instructed along with Tibetan students. “Concentrated schooling,” which involves consolidating local schools into a boarding school, brings educational benefits in terms of diversity, facilities and standards. But the boarding schools also reduce children’s contact with their families and with a Tibetan-speaking environment.

Authorities insist that Tibet’s “stability” rests on the success of “ethnic mingling” and “identification” policies that place a far higher premium on political loyalty to the Chinese Communist Party than they do education or cultural rights.

Ordinary Tibetans have expressed widespread concern about the increasing loss of fluency in Tibetan among the younger generation as a result of changing school policies. While many favor Tibetan children learning both languages, there is considerable opposition to Chinese authorities’ approach, which erodes the Tibetan language skills of children and forces them to consume political ideology and ideas largely contrary to those of their parents and community.

These policies are not carried out in a vacuum. Tibetans already endure pervasive restrictions on their rights to free speech and religious belief, political participation and cultural expression. Since China’s “bilingual education” policies were formally introduced in 2010, Tibetans have repeatedly protested against them, mostly in Qinghai province in northwestern China. They have also demonstrated virtually by publishing online letters and petitions.

Twice in 2015, Tibetan language-rights campaigner Tashi Wangchuk tried to file formal complaints in Beijing concerning the absence of Tibetan-language teaching in his area. He was detained in early 2016 after the New York Times interviewed him about his advocacy efforts. When he was sentenced to five years in prison, the court said he was guilty of “inciting separatism.”

In early 2018, regional police in China issued a public notice that declared organizations campaigning on “mother tongue” issues illegal and a form of “underworld gang crime.”

Since 1996, three United Nations human rights expert committees have repeatedly expressed concern over China’s disingenuous claims that the country is providing truly bilingual education. The committees have also repeatedly urged China’s government to make sure that Tibetan children are able to learn in their own language — and to protect those who advocate for mother-tongue education. But during this same period, Chinese authorities have steadily eroded that right and criminalized efforts to realize it.

Unless concerned governments step in and successfully pressure Beijing to reverse these policies, more Tibetans will pay an extremely high price for trying to keep their language — their identity — alive.