Children as young as 12 have been tortured in Egypt’s prisons. Horrific accounts of what happened to them include being suspended from ceilings until their shoulders dislocate, beaten repeatedly, tortured with electic shocks, and forced into stress positions. Hundreds of children have been detained by Egypt’s security forces since the military took power in 2013. They are often arrested without being given a reason, or because they were simply taking part in public protests. The Human Rights Watch report, “No One Cared He Was a Child,” jointly researched with Belady: An Island For Humanity, tells the stories of torture, enforced disappearance, and other abuse experienced by just some of those children. 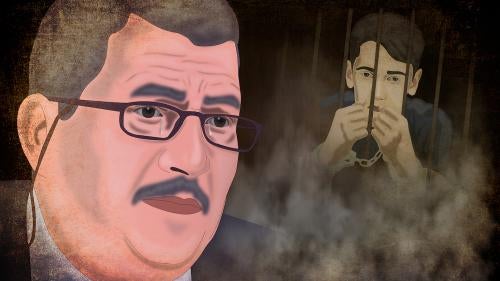 Hamza spent his 15th birthday standing on his toes with sharp nails under his heels. The teenager had spoken to someone else in his cell – something the guards had forbidden.

“He hates his birthday now, he does not want to celebrate it again,” a relative told Human Rights Watch.

Hamza was asleep when National Security forces came into his home one night in 2016 and arrested the then-14-year-old for taking part in a demonstration outside the Three Pyramids Hotel in Giza.

His father tried to go with them, but they threatened him, and refused to tell the family which police station they were going to. Hamza wouldn’t be heard from again for more than a month.

Eventually, at a hearing, Hamza found a sympathetic soldier who called his family and told them Hamza was being sent to a Central Security Forces camp in Cairo.

Officials at first denied holding the boy, but admitted it when the family returned five days later. After nine days, the were allowed to see him, and learnt what had happened to him.

“During the first two days of his interrogation, officers used electric shocks on his genitals, head, and tongue. On the third day he was suspended by his arms, which dislocated both his shoulders,” his relative said.

Hamza was then left on the floor of a corridor for three days in winter. Eventually, he was taken to an underground cell where another detainee, who was a doctor, was able to fix his dislocated shoulders.

Even after his reappearance, Hamza was not allowed to talk to a lawyer until his second hearing, about 48 days after his arrest. At the end of his trial, the boy was sentenced to ten years in prison for taking part in the anti-government protest in 2016.

He is behind bars at the Central Security Forces’ camp, where his family visits him once a week for about five minutes. Hamza has taken his school exams while in detention and came second in his year at his school – because political prisoners who were in cells with him helped him study.

“Come take his corpse from Cairo,” the voice at the end of the line would say, or “come to the hospital.” They had no idea if Amr was alive or dead.

Amr was arrested in August 2016 when he was on the way to see his tutor. The men who took him did not show him an arrest warrant. More than three months later, in November 2016, his family received word that Amr had been brought before the State Security Prosecution in Cairo, accused of participating in a protest that damaged a public building. He was then transferred from National Security detention to a child detention facility.

“His family barely recognized him. He had been in the same clothes for three months, no shower, no water, nothing,” a relative told Human Rights Watch.

Amr would not tell his family what had happened to him during those three months, but they knew that the National Security officers who detained him waited for the torture marks to disappear before they formally presented him for prosecution.

Amr slowly began to recover while in juvenile detention, but when he turned 18 he was moved to another police station. Police there either stole or never delivered the food and medicine his family brought for him.

He joined a hunger strike to demand better conditions, but instead was transferred to the maximum security “Scorpion Prison.” Since then, his family have only seen him during court hearings, as he stood in a soundproof cage.

“We were both signaling to each other but not understanding anything,” the relative said. On March 6, a military court acquitted Amr of any wrongdoing in the case.

Abdullah was 12 when he was taken from his mother’s home in the night. She wouldn’t see him again for more than six months.

In prison, he suffered horrific torture including beatings, electric shocks, and waterboarding. At one point, the boy was handcuffed and suspended by his physically disabled right hand, causing immense pain.

He also described seeing his own father being tortured, but was unable to speak to his father. The two were taken a few weeks apart because, the family thinks, Abdullah’s older brother was a member of an ISIS affiliate before he was killed in April 2019. The family still doesn’t know if Abdullah’s father is alive.

He resurfaced in a Cairo police station in July 2018, and his ordeal continued. He was interrogated without a lawyer, charged with terrorism offenses despite the lack of evidence, and placed in solitary confinement for 100 days. Police denied him family visits, medical care, and the chance to bathe, which caused boils on his skin, according to his lawyer.

Fourteen days after receiving a December 2018 court order to release him, authorities transferred the boy to a police station in al-Arish. That January, a police officer at the station told Abdullah’s older sister to sign a document confirming that she had her brother, promising to give him to her the next day.

When she came to pick up her little brother, officers said they didn’t know where he was. Today, his family does not know what happened to him.

When 17-year-old Yahia was brought in front of a judge, his clothes were covered in blood, both his shoulders were dislocated, and he couldn’t walk.

When he said he’d been tortured, the prosecutor responded: “You watch a lot of action movies, don’t you?” and threatened to send him back to the same man who had tortured him unless he confessed to charges of joining a terrorist organization, participating in an attack, and “spreading a pessimistic atmosphere” in the country.

Yahia had been buying an ice cream when he was snatched off the street and thrown into a van in the winter of 2015. The police were responding to a nearby protest that Yahia hadn’t even known was happening.

At the police station he was dragged around by his hair, blindfolded, beaten on the head with a leather truncheon, shocked with electricty, and suspended off the ground until his shoulders dislocated. After seven days of torture and being handcuffed to a group of eight men and forced to sleep in an unheated room with the window open, the boy made a false confession.

After his torture claims were dismissed in court, he spent 30 days in a cell with 80 other people, mostly adult men.

Eventually, he was sent to a youth detention facility, but was transferred back to a police station when he turned 18, where it was impossible for him to continue his studies.

He went on an 11-day hunger strike, and was eventually transferred to a prison, but then his case was taken over by a military court 12 hours away. Yahia said he and others were transported to and from the hearings in an overcrowded truck, and that prison officials sent him to court in the truck when he had no hearings as punishment.

In late 2016, after nearly two years in detention, he was sentenced to three years in jail, including time served, and has since been released.