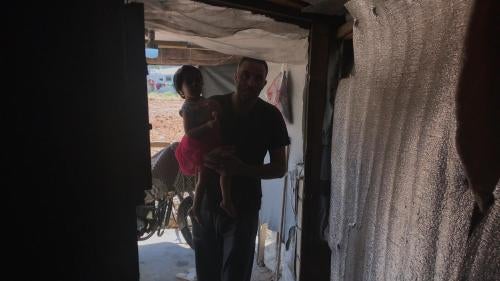 I met then-two-year-old Jana and her family this past June as I was passing by their shelter in the ibn Waleed camp in Arsal, Lebanon. Jana’s mom, Badoor, came up to me, holding Jana in her arms. “Please come inside, my daughter is sick,” she said.

I was in Arsal to document the sudden enforcement of old Lebanese housing codes. The Lebanese armed forces had given Syrian refugees a deadline of July 1 to comply with longstanding, but rarely enforced, housing codes and partially dismantle their shelters that were not up to code. This effectively required many refugee families to knock down the hard walls and roofs that had sheltered them from the harsh climate.

Jana and her family were among the estimated 5,682 Syrian refugee households in Arsal who were forced to comply or risk having their shelter completely demolished by the Lebanese armed forces.

When I entered their shelter, I was welcomed by Saad, Jana’s father. He was in the process of dismantling the top portion of their concrete shelter. According to the order, Syrian refugee shelters built on agricultural lands in Arsal are permitted a foundation no more than five cinder blocks high. That forced the refugees to use tarp and wood to build the top half and roof.

Tarp and wood might suffice for Arsal’s hot summers, but winters are a very different story. The 40 Syrian refugees we spoke to in Arsal and the Bekaa Valley in June who were dismantling their housing expressed worries about the upcoming winter with only partial-concrete shelters.

“This winter will be hard,” Saad said. “With the [full] concrete wall, it was hard, so I can’t imagine without it.” Saad’s worries were echoed in interviews with other refugees who expressed worries over floods, heavy snow, freezing temperatures, and rats and insects getting inside their semi-tent shelters.

All of the Syrian refugees I spoke to in June, including Saad and Badoor, felt the enforcement of these old housing codes was one of many pressures authorities were using to get them to give up asylum and return to Syria. Refugees described raids on their camps by Lebanese authorities, as well as arrests, shop closures, and harassment. One woman told me that while her two children were returning from school, a man approached the two school-aged children with a knife and cut the straps of their backpacks.

Saad was caught up in one of the army sweeps of the camp. It happened one day at about 5 a.m. He said the army arrested about 400 men and boys. “I thought of running away, but the camp was surrounded and running away would have only made it worse.” Saad was handcuffed and loaded into an army truck. “If you looked at them, they slapped you.” They were taken to an army base in Baalbek and held until the following day. Upon their release at 3 a.m., they were left on their own to make it back to the camp. “Every time there is a hard knock on the door, we are scared, thinking the army is here again,” Badoor said.

For Saad and Badoor, arrest, harassment, and the dismantlement of their shelter is only half their story. They are deeply worried about their daughter Jana, who has spina bifida, a condition where the spine and spinal cord do not form properly. This condition can cause paralysis and gastrointestinal, muscular, and skin problems. When we met Jana, she was able to walk, but had a slightly hunched back.

They showed us papers from the American University of Beirut Medical Center diagnosing Jana and prescribing surgery. But the surgery wasn’t guaranteed to cure Jana and would cost US$15,000. While Jana could walk when we met her, her parents were warned that without the surgery, in a few years she might not be able to.

The entire family is registered with the United Nations refugee agency, UNHCR, and receives US$27 a month per person on an ATM card. Jana’s mom told me this is not enough, especially because they pay out-of-pocket for Jana’s medicines.

UNHCR subsidizes the costs of basic medical care for Syrian refugees, but does not cover long-term care, experimental and/or non-evidence-based treatment, or treatment of chronic degenerative diseases.

So, with the crackdown by Lebanese authorities, plus the possibility of treatment back home, Jana’s parents were feeling pressure to pull up stakes and return to Syria.

“We dream of going back to Syria, but it is not safe for us to go back,” Badoor said. Most Syrian refugees I spoke with, including Saad and Badoor, wanted to return to Syria, but cited fears of conscription, arrest, ongoing conflict and insecurity, and widespread destruction as reasons holding them back from returning.

I spoke to Badoor in October to check in on the family. Badoor told me that after two months of waiting without a formal roof structure, they finally received some wood and plastic cover in August. “During that time [we were waiting for the roof materials], it was still summer. The days were fine, nights were a little cold…the biggest issue was the animal situation. Toads and cats would come into the tent,” Badoor told me.

Once they received the materials to rebuild the upper part of the shelter, they quickly realized that it was not enough to cover the entire shelter. They also did not receive enough insulation. There are visible gaps in coverage for the roof and around the walls to keep heat in and water out. “If it snows, I am scared that the [wooden and plastic] roof will collapse and water will come inside,” she said, adding that her entire camp was short on building materials.

It’s been six months since we first met Jana and her family. The weather in Lebanon is starting to cool as the rains come. Syrian refugees throughout Arsal are facing a lack of materials to properly winterize shelters. In winter 2018-2019, an 8-year-old Syrian refugee died and around 300 Syrian refugees had to be relocated because of severe weather conditions, including heavy rain and snow and sub-zero temperatures.

For Jana’s family, and the many other Syrian refugee families with children and family members requiring extensive medical treatment, winterization is half of the problem. And going home is not the solution.