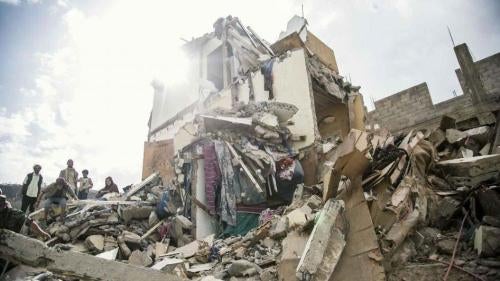 Yesterday I walked a route I know well from my former days as a trainee lawyer, through the cavernous Royal Courts of Justice in London, to hear three judges issue a ruling. It was all over in 15 minutes, but my colleagues and I left stunned after the Court of Appeal ruling led the UK government to suspend – for now – new licenses for UK arms sales to Saudi Arabia.

How did this happen? Saudi Arabia has led a coalition fighting a war in Yemen since 2015. Human Rights Watch and others have documented numerous unlawful airstrikes against civilians and other laws-of-war violations by coalition forces, as well as abuses by the opposing Houthi armed group. As of mid-March, the Office of the United Nations High Commissioner for Human Rights had verified the deaths of 7,072 civilians over the previous four years, with 11,205 injured. The real toll may be far higher.

Despite the abuses, the UK government has defended its continued weapons sales to the Saudis. It said that when considering whether to license arms sales to a country, it will not allow arms exports if there is a “clear risk” that they might be used to commit serious violations of international humanitarian law.

15 minutes of courtroom drama and suddenly the UK had stopped arms sales to Saudi Arabia.

Until now, the government has maintained it is unable to determine if there have been violations – ignoring on-the-ground research by Human Rights Watch, Amnesty International, and others who have exhaustively catalogued apparent unlawful attacks. The government used this to justify continued arms sales.

But in court yesterday, the UK’s position was comprehensively dismantled. Judges ruled the government’s process for licensing arms exports is unlawful, and as a result the government agreed to immediately suspend all future licenses for arms sales to Saudi Arabia.

After years of fighting for this outcome, it was hard to absorb the enormity of yesterday’s decision. And it’s only temporary, of course, because the UK government can be expected to appeal the decision.

But the shock of this verdict will reverberate to Riyadh and beyond. And it will put other EU countries that sell arms to Saudi – such as France – on notice too.

Rather than trying to fight this in court, perhaps the UK government should simply stop arms sales to Saudi and tell its close ally that it cannot obtain any more British weapons until it stops unlawfully harming Yemeni civilians – and holds accountable those responsible for past crimes.