This report presents the types of cluster munitions being used in the international armed conflict in Ukraine in 2022 and the civilian casualties immediately suffered and civilian objects damaged.

Since Russia’s invasion of Ukraine on February 24, 2022, Russian armed forces have used at least six types of cluster munitions in attacks that have caused hundreds of civilian casualties and damaged civilian objects, including homes, hospitals and schools. Evidence indicates that Ukrainian forces have also used cluster munitions at least once.

The exact number of Russian cluster munition attacks is not known, but hundreds have been documented, reported, or alleged to have occurred, many in populated areas. At least eight of Ukraine’s 24 oblasts (provinces) have been struck by cluster munitions: Chernihiv, Dnipropetrovsk, Donetsk, Kharkiv, Kherson, Mykolaiv, Odesa, and Sumy.

In the city of Mykolaiv, Russian forces launched cluster munition rockets into populated areas on March 7, 11 and 13, killing and injuring civilians and damaging homes, businesses and civilian vehicles. One of the March 13 attacks appeared to have killed 9 people who were waiting in line at a cash machine.

Media reports also indicate that Ukrainian forces used cluster munitions in Husarivka in Kharkiv oblast on March 6 or 7, when Russia forces occupied the village. The Ukrainian government has not denied this use of cluster munitions and stated that the Armed Forces of Ukraine “strictly adhere to the norms of international humanitarian law.”[2]

Thirty-six countries have condemned the cluster munition attacks in Ukraine, as have the European Union, the United Nations high commissioner for human rights, NATO’s secretary-general and others.

Cluster munitions can be delivered by rockets, missiles, and aircraft. They open to disperse dozens and even hundreds of small submunitions or bomblets over an area the size of a city block. Many submunitions fail to explode on initial impact, leaving duds that act like landmines, posing a threat to civilians for years and even decades.

The cluster munitions currently being used in Ukraine are launched from the ground in rockets and missiles with the exception of the RBK-series cluster bomb, which is delivered by aircraft. The cluster munitions were all manufactured in Russia, some as recently as 2021, or its predecessor the Soviet Union.

According to Ukraine’s State Emergency Service a total of 98,864 items of unexploded ordnance including submunitions and landmines have been cleared and destroyed in the war, as of May 9.[3] During the first seven weeks of the conflict, 29 workers were reportedly killed while doing demining and related work, and 73 were injured.[4] On April 17, three people working for Kharkiv’s emergency services were killed while clearing cluster munition remnants.[5]

Ukrainian government forces and Russia-backed armed groups have both used cluster munitions in the past; namely, in eastern Ukraine between July 2014 and February 2015, according to investigations conducted by Human Rights Watch, the Organization for Security and Co-operation in Europe (OSCE) monitoring mission, and others.[6]

The 2008 Convention on Cluster Munitions prohibits these weapons due to their indiscriminate effect and the long-lasting danger posed to civilians.[7] It provides a comprehensive ban and requires the destruction of stockpiles, clearance of areas contaminated by cluster munitions remnants, and assistance to victims. However, Russia and Ukraine are not among the treaty’s 110 states parties. Nonetheless, the use of cluster munitions in populated areas invariably violates international humanitarian law prohibitions on the use of weapons that cannot discriminate between civilians and combatants.[8]

To the parties to the conflict in Ukraine

This report draws on a range of evidence collected by Human Rights Watch and other organizations. This includes:

I. Types of Cluster Munitions

Six types of cluster munitions have been used in the 2022 international armed conflict in Ukraine. They are all launched from the ground in missiles and rockets except for the RBK-series cluster bomb, which is delivered by aircraft. The cluster munitions were all manufactured in Russia, some as recently as 2021, or by its predecessor state the Soviet Union.

The exact number of Russian cluster munition attacks that have occurred thus far in the 2022 conflict is not known, but hundreds have been documented, reported, or alleged, and mostly in populated areas. At least eight of the country’s 24 oblasts (provinces) have experienced the use of cluster munitions: Chernihiv, Dnipropetrovsk, Donetsk, Kharkiv, Kherson, Mykolaiv, Odesa, and Sumy.

The UN high commissioner for human rights, Michelle Bachelet, said on March 30 that her office had received credible allegations that Russian armed forces have used cluster munitions in populated areas at least 24 times.[17] Remnants of cluster munitions cleared by emergency services indicate that there have been hundreds of attacks.

Cluster munition remnants pose continued danger long after attacks, especially unexploded submunitions. According to Ukraine's State Emergency Service a total of 98,864 items of unexploded ordnance including submunitions and landmines have been cleared and destroyed in the war, as of May 9.[32] During that period, 29 workers were killed while doing demining and related work, and 73 have been maimed or otherwise injured.[33]

On April 17, three people working for Kharkiv’s emergency services were reportedly killed while clearing cluster munition remnants.[34] A civilian in Mykolaiv reportedly lost his hand and received severe internal injuries after he went to clear a submunition that detonated minutes after it was deployed.[35] He told the Independent, “I thought they were safe. Big mistake.”[36]

Russian officials claim the Ukrainian armed forces fired a Tochka-U tactical missile with a cluster munition warhead in Donetsk city on March 14 in what they have called “a war crime.”[38] Human Rights Watch has not been able to independently verify information relating to the reported attack, including if cluster munitions were used.

Russia is the most vocal state critic of the Convention on Cluster Munitions, which it says it cannot join as it regards cluster munitions as “a legitimate type of weapon that is not banned by international humanitarian law and plays a significant role in the defense interests of Russia.”[41] Russia last participated as an observer in a meeting of the convention in 2012.

However, Ukraine has not denied credible evidence of its own use of cluster munitions in the current conflict. A report by the New York Times strongly suggests that Ukrainian forces used Uragan cluster munition rockets in Husarivka in Kharkiv oblast on March 6 or 7, when Russian forces occupied the village.[44] The Times updated the April 18 article to include the following response from Ukraine’s military:

The Armed Forces of Ukraine strictly adhere to the norms of international humanitarian law. One of our constant priorities is the security of the civilian population. We do not open fire or destroy civilian objects, nor do we use weapons and methods prohibited by the Geneva Conventions.

Ukraine inherited a large stockpile of cluster munitions after the break-up of the Soviet Union and used them in Donetsk and Luhansk in 2014 and 2015.[45] At that time, the Ukrainian government repeatedly denied using cluster munitions and blamed the attacks on pro-Russian separatist groups and the Russian armed forces.

Ukraine has not taken any steps to join the Convention on Cluster Munitions and last participated as an observer in a meeting of the convention in 2014.[46]

The Convention on Cluster Munitions obligates each state party to “promote the norms it establishes and … make its best efforts to discourage States not party to this Convention from using cluster munitions.”[47] States parties should firmly oppose any use of cluster munitions by any warring party under any circumstances.[48]

As the current president of the Convention on Cluster Munitions, the United Kingdom has expressed grave concern at the use of cluster munitions in the Russian invasion of Ukraine. It “calls upon all those that continue to use such weapons to cease immediately, and calls upon all states that have not yet done so to join the Convention without delay.”[50]

The cluster munition attacks in Ukraine have also been condemned by the European Union and its member and candidate states, the UN high commissioner for human rights and UN special rapporteurs and experts. It has also been condemned by the nongovernmental Cluster Munition Coalition, which is chaired by Human Rights Watch. The condemnations of the use of cluster munitions in Ukraine in 2022 as well as strong media coverage and public outcry demonstrate the growing stigma against these weapons.

On March 4, NATO Secretary-General Jens Stoltenberg called Russia’s use of cluster munitions in Ukraine “inhumane” and “in violation” of international law.[54] All of NATO’s 30 member states have ratified the Convention on Cluster Munitions except Estonia, Greece, Latvia, Poland, Romania, Turkey, and the United States.

States that have joined the Convention on Cluster Munitions are prohibited from assisting, encouraging or inducing anyone to engage in any activity banned under the convention. Therefore, any NATO or other military operation in support of Ukraine in which states parties participate could not assist with the use and transfer of cluster munitions.

We would like to thank the Cluster Munition Coalition for its assistance in disseminating this report. 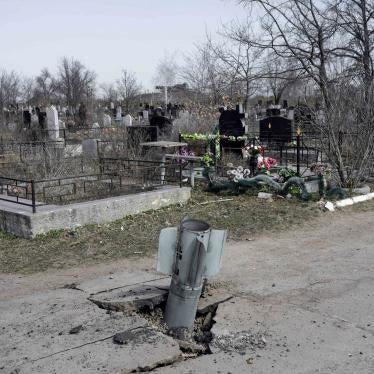