Seventy-eight-year-old Galina lives in a city on the front line separating Ukrainian troops and Russian-backed armed groups in eastern Ukraine. Before the fighting began five years ago, collecting her Ukrainian pension was as simple as a five-minute walk to the bank.

Since her husband died in 2014, Galina relies on that pension more than ever. But she now has to take two buses, stand in passport control and security lines for hours, walk almost four kilometers and scale a partially destroyed bridge into Ukrainian-controlled territory just to get it. On a good day, it’s a 10-hour trek. Sometimes, like when I met her in Stanytsia Luhanska – the only crossing point in this region of east Ukraine – it’s an overnight trip. 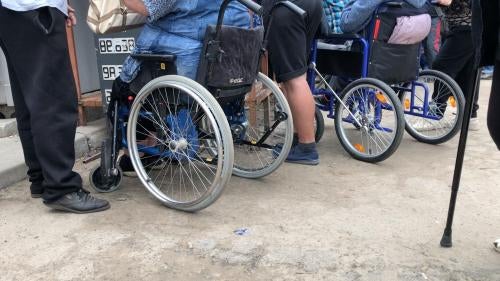 Each month, about one million people cross through checkpoints like the one Galina uses in east Ukraine. More than half are older people traveling into areas under Ukrainian control to collect social benefit payments. Between January and early April, according to the Organization for Security and Co-operation in Europe (OSCE), at least 19 people died while crossing these checkpoints, mostly older people with heart-related complications.

Galina is no stranger to health issues during these crossings. In November, she fainted while waiting in line, and now carries a cane in case she gets lightheaded. In May, she was crossing with a neighbor when they both slipped and fell on the steep wooden ramp that connects parts of the broken bridge. In January, Galina’s legs got so cold while waiting in line that she lost control of her bladder.

“(This) worries me more than anything, it makes me so ashamed,” Galina, who asked me not to use her full name, told me. “Thank God there was snow and rain, and I was warmly dressed and so nobody saw. But I still knew I stank.”

Galina has to make this journey because the Ukrainian government requires people from areas under the control of Russian-backed groups to travel to government-controlled territory to receive their pensions.

Ukrainian officials have voiced deep suspicion and even hostility toward this population, suggesting they are “anti-Ukrainian.” The government also forces them to register as internally displaced persons and to provide addresses in government-controlled areas – a legal fiction which often involves paying monthly fees to landlords there – and to make the difficult journey through Ukrainian crossing points at least once every 60 days. If they fail to register or cross, the authorities automatically stop paying their pension.

Spend an hour in Stanytsia Luhanska and it becomes clear just how arduous these requirements are for older people. Dozens pass by in wheelchairs, while others can walk only with crutches, walkers, or canes. Some people pay up to 200 hryvnia (about US$7.60) to be ferried one half of the journey in hand-pushed carts – no small price for someone on a pension of 2000 hryvnia (US$76).

Of the 15 people Human Rights Watch interviewed there in May, nine had mobility issues. Eleven said they had experienced some kind of health emergency – often fainting or spikes in blood pressure – while crossing before.

“Every day more than 10,000 people cross here, mostly those who are 60 or older, people with chronic illnesses or disabilities, people for whom this is a very difficult journey,” said Olena Grekova of Right to Protection, a group that provides legal aid and other services to those affected by the conflict. “At one time we thought we could allow these people to cross in a separate line, but we realized that then there would be nobody to stand in the (regular) line.”

This journey isn’t the only difficulty pensioners face. Thirteen of the people we interviewed said they had been denied pension payments for periods ranging from two to 17 months, either for failing to make a crossing to Ukrainian-controlled areas within the 60-day window or for failing to appear at the address on their displaced persons registration. They struggled to get by in those months. One woman said she lost 10 kilograms (22 pounds) during the year when she lost access to her pension because she couldn’t afford enough food, while another said she didn’t have enough money even for small non-essentials, such as candy for her grandson.

From April 2017 to August 2018, Galina was denied her pension of 2,600 hryvnia (US$98) after officials visited the address where she was registered as a displaced person in government-controlled territory (she pays 100 hryvnia per month – or US$4 – to the landlord for the service) and didn’t find her there. She struggled to navigate the bureaucratic labyrinth required to restore her pension, and to pay for the travel from office to office that was required. Neighbors helped her during those months, but it wasn’t enough to cover medication or other basic needs.

“Money slipped through my fingers like water,” she said. “I had to save up just to have enough to eat.”

According to the United Nations (UN), in early 2016 more than 900,000 people from areas not under government control were receiving pensions, compared with an estimated 1.3 million before the conflict began in 2014. But in 2016, Ukraine began more strictly enforcing address requirements for pensioners registered as displaced persons and introduced the new 60-day limit on time that could be spent outside government-held areas. The UN estimates that 400,000 people have lost access to their pensions since those policies were implemented.

While the supreme court ruled some of those practices unconstitutional, pensioners registered as displaced persons can still be denied payment for a wide range of reasons. And under the current system, those who can’t leave their homes due to health or mobility issues cannot get their pensions at all. According to the UN, figures released by the Pension Fund in November 2018 showed arrears to pensioners in the conflict zone at 53 billion hryvnia. The figure has likely increased since then, but the Pension Fund has not yet responded to repeated requests for comment.”

Five years after the start of this conflict, Ukrainian officials are still unwilling to consider alternative ways to make pensions and other benefits more accessible for people who live in the conflict zone and already face tremendous difficulties. Older people in this situation who depend on their pension to survive have no choice but to navigate this arduous journey and a bureaucratic labyrinth that leaves them vulnerable to the government revoking their pensions.

It doesn’t have to be this way. Ukrainian pensioners living abroad remain eligible to receive benefits without having to meet additional, burdensome requirements, and can even receive payments in advance. Other pensioners can appoint a representative with power of attorney to collect pensions for them. While the situation is clearly made more difficult by the conflict in eastern Ukraine, even there the government has options. Aid groups say they have offered to transport people with mobility issues to government-controlled areas to receive their pensions, and a law currently stalled in parliament would eliminate the requirement for pensioners to register as displaced persons altogether.

But instead of taking steps to make life easier for pensioners, some Ukrainian officials have signaled that they consider these people unworthy of their pensions. They’ve doubled down on these statements since Russia announced in April that it would allow people in regions not under Ukrainian control to apply for Russian passports in an expedited procedure – even though those passports would not qualify a person to receive a Russian pension unless they moved there.

Some officials have been more sympathetic to Ukrainians living behind the front lines. The country’s new president, Volodymyr Zelensky, suggested that Ukraine should pay pensions to people living in territories not under government control, but since he was elected in April, he has not detailed how the government would make it happen.

For people like Galina, these crossings every 60 days should not become a new normal. When I spoke with her in May, she had left home at 6 a.m. and by 3 p.m. she finally managed to withdraw her pension money from one of two ATMs next to the crossing point. But she wasn’t going make it back across in time to catch the bus, so she had to spend another 150 hryvnia (US$6) for a place to sleep – most likely on a mat on the floor, she says – before making her way back to her house in the morning.

“I went to work at age 13 gathering potatoes,” she said. “I was from a family of workers and, even then, I thought about how I would have a pension someday. This is our pension, we earned it, and nobody has a right to take it away.”