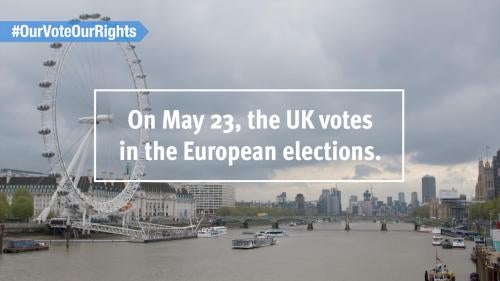 Next week’s European Parliament elections come at an awkward time for the UK.

Brexit was supposed to have taken the UK out of the EU by March 31, following the 2016 referendum result, and with it the need to take part in the European elections this month. Instead Brexit’s political deadlock, which leaves the UK a member of the European Union until at least October 2019, means the UK will participate after all.

Not everyone in the UK is happy about this.

Many in the UK’s ruling Conservative Party and elsewhere who wish Britain had already left the EU argue that selecting candidates to sit in the European Parliament is an unwelcome reminder of the government’s – and some would add parliament’s – failure to deliver Brexit.

Laws crafted in the European Parliament, with the help of British MEPs voted into office by the British public, have brought many tangible benefits for ordinary people in the UK. They have helped to keep British seas and drinking water clean, to stop UK employees being forced to work more than 48 hours per week, to set important government targets on fighting climate change, and to prevent discrimination in the workplace.

And these safeguards extend beyond Britain’s borders. The European Parliament also helps to protect the rights of EU citizens across the union, including those of British citizens living and working in other EU countries, as well as EU citizens who have chosen to make the UK their home.

There’s no doubt that Brexit has cast uncertainty over the UK’s future relationship with Europe. But so long as the UK remains a member of the European Union, it’s vital that Britain elects representatives that will help press Europe’s powerful institutions to protect human rights at home and abroad. And the only way to do that is at the ballot box on May 23.