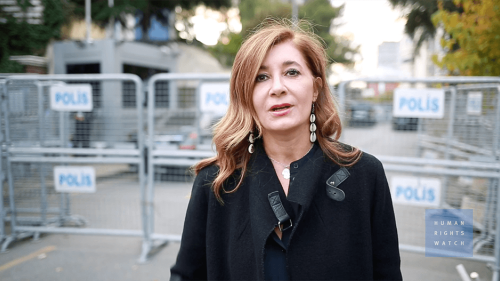 An international investigation under the authority of the secretary general would have the mandate, credibility, and stature to press officials, witnesses, and suspects in Saudi Arabia to cooperate with requests for facts and information about the murder in Istanbul on October 2, 2018. It would help cut through efforts designed to shield Saudi officials and obfuscate the truth.

“The Turkish government should make good on its call for an international investigation into Jamal Khashoggi’s death by formalizing it with an official letter to the secretary general,” said Sarah Leah Whitson, Middle East director at Human Rights Watch. “A UN investigation has the best chance of pushing Saudi Arabia to provide the needed facts and information about Mohamed bin Salman’s precise role in this murder, information that is available only from sources in Saudi Arabia.”

President Recep Tayyip Erdoğan of Turkey said on December 1 in Buenos Aires that Saudi Arabia has failed to cooperate with the ongoing Turkish criminal investigation into the murder, and that the crime was a “world issue.” While Saudi Arabia has conceded that Khashoggi’s murder was carried out by Saudi agents in Turkey, the complete details about the authorization, planning, and execution of this murder, including any role played by Crown Prince Mohamed bin Salman, remain unclear. Saudi Arabia has officially denied that the crown prince had prior knowledge of the plot to target Khashoggi. On December 5, media reported that the Turkish prosecutor issued arrest warrants for two former senior Saudi officials implicated in the killing.

There is ample precedent for such an international investigation. In 2008, Pakistan asked Guterres’s predecessor, Ban Ki-moon, to investigate the assassination of former prime minister Benazir Bhutto. Earlier in 2018, Britain turned to the Organization for the Prohibition of Chemical Weapons (OPCW) to confirm British authorities’ findings that a Soviet-made nerve agent had been deployed in Salisbury against a former Russian agent.

“The main thing holding up an international investigation led by the secretary-general right now is the lack of a formal, written request from the Turkish government,” Whitson said. “Turkish officials have made public statements supporting such an investigation, so it’s puzzling why they have not formally requested the inquiry.”

Turkey’s allies and Guterres should encourage Ankara to request an inquiry without delay. This would enable UN investigators to move quickly to circumvent any Saudi attempts at a cover-up.

Saudi Arabia’s own investigation has little credibility and has been riddled with deliberate falsehoods from Saudi authorities. Initially, the Saudi government denied that its agents had detained and murdered Khashoggi in the Saudi consulate in Istanbul, claiming he had left the building.

On October 20, Saudi Arabia released two statements confirming Khashoggi’s violent death in the Saudi consulate in Istanbul. The first statement claimed that Khashoggi died as the result of a “brawl and a fist fight” with “persons who met him.” The second statement announced that Saudi Arabia’s Public Prosecutor had ordered the detention of 18 Saudi men who “had travelled to Istanbul to meet with…[Khashoggi] as there were indications of the possibility of his returning back to the country.” It also accused the men of attempting to cover up Khashoggi’s killing.

The Public Prosecutor has now charged 11 men whom it accuses of participating in the murder, seeking the death sentence for five. But it has not arrested the most senior officials accused of involvement in the plot to target Khashoggi, including the former royal court adviser, Saud al-Qahtani, and the deputy intelligence chief, Ahmed al-Assiri, merely announcing their resignations. Qahtani tweeted in August 2017 that he does not act without orders from the king and crown prince but Saudi Arabia also announced, without evidence, that Crown Prince Mohammed bin Salman was not responsible.

On November 15, the United States announced sanctions against 17 Saudi men allegedly involved in Khashoggi’s killing, including al-Qahtani. According to media reports, al-Qahtani  directed online campaigns against Saudi critics and is known in diplomatic circles as the “prince of darkness.”

“A transnational crime of this nature, implicating not only Saudi Arabia and Turkey but also Egypt and the UAE, where the two planes filled with fleeing murderers holding evidence first landed, desperately needs an international investigation,” said Whitson. “This wasn’t only an attack on a Saudi citizen, it was an attack on a journalist, and a brazen abuse of the system of diplomatic immunity for embassies and consulates.”