(Seoul) – China should not deport 15 North Koreans held in Chinese detention back to North Korea, but should either grant them asylum or allow them to safely go to a third country, Human Rights Watch said today. North Koreans who are forcibly returned after fleeing their country face a real risk of torture, sexual violence and abuse, incarceration in forced labor camps, and death.

According to North Koreans who have fled the country since 2013, or who maintain contacts inside the country, people repatriated by China face incarceration in forced labor camps, political prison camps (kwanliso), or even execution. Political prison camps in North Korea are characterized by systematic abuses and often deadly conditions, including meager rations that pose risk of starvation, virtually no medical care, lack of proper housing and clothes, regular mistreatment that includes sexual assault and torture by guards, and summary executions. Death rates in these camps are reported by former North Korean prisoners and guards to be extremely high. Detainees in ordinary prison camps also face forced labor in dangerous working conditions, food and medicine shortages, and regular mistreatment by guards.

“China needs to recognize that sending these 15 North Koreans back to their country means condemning them to suffer horrific rights violations, and immediately halt any effort to send them back into harm’s way,” said Phil Robertson, deputy Asia director. “China’s leaders should instead call for Pyongyang to cease the human rights violations that are compelling people to flee the country in the first place.” 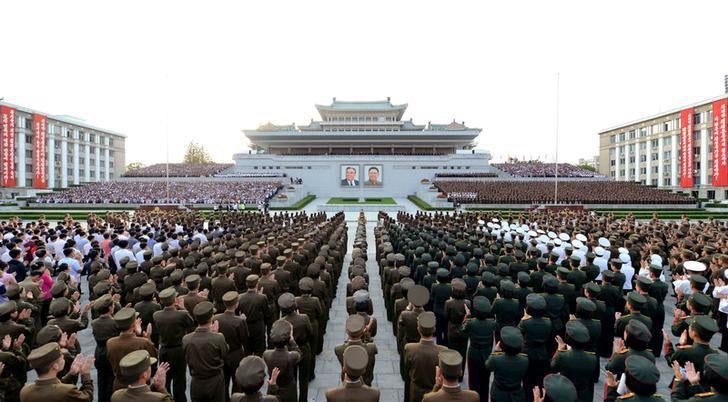 
Human Rights Watch learned about the situation of the 15 detainees through a father whose son left North Korea and was apprehended by Chinese authorities with four other North Koreans in early July. This father learned that five people were first detained near the Laos border, then grouped with another ten North Koreans, including three children, in detention in the Xishuangbanna Dai Autonomous Prefecture of Yunnan province.

The father told Human Rights Watch that some family members of the detained North Koreans managed to visit the detention center where they were being held. They found out that on August 1, 2017, the group had been moved to the Tumen immigration detention facility in Jilin province, right across the border from the North Korean city of Namyang in North Hamgyong province. This facility is usually one of the last detention centers where North Koreans who face imminent forced return are held. On August 4, the father heard from a credible source that the 15 detainees, including his son, had arrived in Tumen, and authorities were preparing to send the group back to North Korea.

According to interviews conducted by Human Rights Watch with North Koreans who have previously been apprehended in China and returned to North Korea, the North Korean government harshly punishes all those who leave the country without permission. In 2010, North Korea’s Ministry of People’s Security adopted a decree making defection a crime of “treachery against the nation,” punishable by death. Human Rights Watch considers all North Koreans in China who left without permission to have refugee status (as refugees sur place) because they have a well-founded fear of persecution if forcibly returned.

Forcing North Korean refugees back to their country constitutes refoulement, or the sending of persons back to territory where they face threats to life or freedom, which is forbidden by international treaties to which China is a party as well as by customary international law. Under the 1951 United Nations Refugee Convention and its 1967 Protocol, as well as the 1984 Convention against Torture, China is specifically obligated not to force back North Koreans, who would be placed at risk of persecution or torture.

For North Koreans who are returned and not sent to political prisoner camps, the authorities may sentence them to between 2 to 15 years forced labor in ordinary prison camps (kyohwaso, or re-education correctional facilities) for living or working illegally in China.

A former senior official in the North Korean state security service (bowibu), who previously worked on the border and received North Koreans sent back from China, told Human Rights Watch that officials under his command tortured every returnee to find out where they went in China, who they contacted, and what they had done while outside North Korea.

The 2014 UN Commission of Inquiry on human rights in North Korea found that crimes against humanity, including torture, execution, enslavement, and sexual violence, are committed against prisoners and people forcibly returned to North Korea from China. On July 27, 2017, Tomás Ojea Quintana, the special rapporteur on human rights in North Korea, said: “North Koreans who leave their country are caught in a horrendous cycle of physical and psychological violence, and I received information that some take their own lives when they find out that they are scheduled for repatriation.”

Human Rights Watch calls on China to protect those in Chinese custody, to grant North Koreans asylum or safe passage to other countries, and to allow the UN refugee agency to exercise its mandate and protect North Korean asylum seekers.

“China should demonstrate to the UN and governments around the world that it will no longer be complicit with the North Korean government’s rights violations against its own people,” Robertson said. “By protecting these 15 North Koreans, Beijing would send a strong message that China will no longer play along and ignore North Korea’s human rights abuses.”