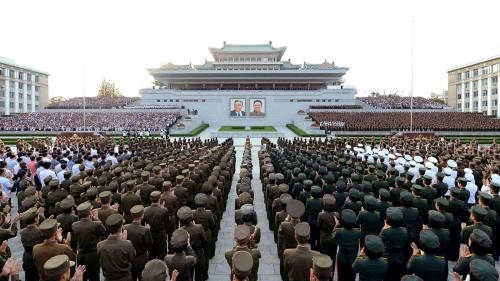 North Korea remains one of the most repressive authoritarian states in the world, ruled for seven decades by the Kim family and the Worker’s Party of Korea. During his fifth year in power, Kim Jong-Un continued to generate fearful obedience by using public executions, arbitrary detention, and forced labor; tightening travel restrictions to prevent North Koreans from escaping and seeking refuge overseas; and systematically persecuting those with religious contacts inside and outside the country.

On December 10, 2015, the UN Security Council discussed North Korea’s bleak human rights record as a formal agenda item for the second year in a row, following the COI’s recommendations.

North Korea discriminates against individuals and their families on political grounds in key areas such as employment, residence, and schooling through “songbun,” the country’s socio-political classification system that from its creation grouped people into “loyal,” “wavering,” or “hostile” classes. This classification has been restructured several times, but continues to enable the government to privilege or disadvantage people based largely on family background, personal performance, and perceived political loyalty.

However, pervasive corruption enables some room to maneuver around the strictures of the songbun system, even while it burdens people as government officials regularly demand and receive bribes from those seeking permissions, pursuing market activities, or wishing to travel inside or outside the country.

In 2016, Kim Jong-Un’s government increased efforts to stop North Koreans from crossing into China without permission. Some tactics included building barbed-wire fences on the northern border; persecuting those caught in North Korea using Chinese cellphones to communicate with people in China or South Korea; and increasing efforts to block Chinese cell phone services near the border.

Both North Korea and China have increased patrols and established barriers to crossing the border. The Chinese and North Korean governments have also targeted and broken up broker networks in China, meaning fewer people are willing to guide North Koreans on the arduous journey to escape through China.

China is a state party to the Refugee Convention of 1951 and its 1967 protocol, but it considers all North Koreans in China to be “illegal aliens” and routinely repatriates them without consideration of their claim to asylum. Human Rights Watch believes all North Koreans fleeing into China should be considered refugees, whatever their motivation for flight, because of the certain prospect of severe punishment if they are returned.

Fleeing North Korean women are frequently forced into marriages with Chinese men, or into the sex trade. Even if they have lived in China for years, they face possible arrest and repatriation at any time. Many children from these unrecognized marriages lack legal identity or access to education or health services in China.

All domestic media and publications are strictly state-controlled, and foreign media allowed inside the country are tightly controlled as well. Internet and international phone calls are heavily monitored.

Those accused of serious political offenses are usually sent to political prison camps, known as kwanliso, operated by North Korea’s National Security Agency. These camps are characterized by systematic abuses, including meager rations that imperil health and can lead to starvation, virtually no medical care, lack of proper housing and clothes, regular mistreatment including sexual assault and torture by guards, and public executions. Political prisoners face backbreaking forced labor, including in logging, mining, and agricultural.

UN officials estimate that between 80,000 and 120,000 people are imprisoned in political prison camps.

Those whom authorities suspect of illicitly trading goods from and into China, transporting people to China, and minor political infractions, such as watching or selling South Korean films, may receive lengthy terms in detention facilities known as kyohwaso (correctional, reeducation centers). Detainees there face forced labor, food and medicine shortages, and regular mistreatment by guards.

The government systematically uses forced labor from ordinary citizens to control its people and sustain its economy. A significant majority of North Koreans must perform unpaid labor at some point in their lives.

Former North Korean students who left the country told Human Rights Watch that their schools forced them to work for free on farms twice a year, for one month at a time, during ploughing and seeding time, and again at harvest time. A former school teacher who escaped North Korea in 2014 said his school forced its students (aged between 10 and 16) to work every day to generate funds to pay government officials, maintain the school, and make a profit.

Ordinary North Korean workers, both men and unmarried women, are required to work at government-assigned enterprises. Although they are theoretically entitled to a salary, they usually are not compensated. All North Korean families also have to send one family member for at least two hours per day, six days a week, to support local government construction or public beautification projects, like building structures, fixing roads, collecting raw materials like crushed stone, or cleaning public areas.

The government launched a 70-day “battle” to prepare for North Korea’s most important political event in 36 years, the 7th Korean Workers Party Congress, which took place between May 6 to 10. The government forced people across the country to produce more goods and crops in order to cover the costs of the congress. Posters, billboards, and media broadcasts demanded that North Koreans complete their “battle plans,” and counted down the days until the congress opened.

North Korea is one of the few nations in the world that has not joined the International Labour Organization. Workers are systematically denied freedom of association and the right to organize and collectively bargain.

Since Kim Jong-Un’s rise to power, the government has sent more workers overseas to earn foreign currency salaries, most of which the government seizes. Although the country does not release official data, some observers estimate that more than 100,000 North Koreans worked overseas in 2015.

The treatment of North Korean workers overseas falls short of international labor standards, with no right to freedom of association or expression, control by minders who limit freedom of movement and access to information from the outside world, long working hours and no right to refuse overtime.

South Korea has also stepped up its demands for the return of its citizens, hundreds of whom were reportedly abducted during the decades after the Korean War. The North Korean government has also kidnapped individuals from China, Thailand, Europe, and the Middle East.