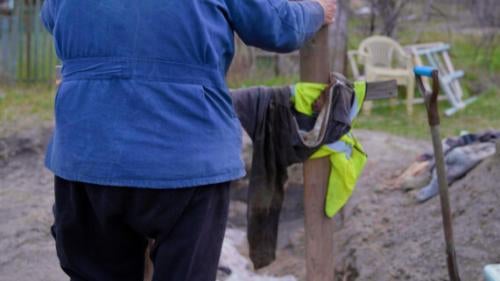 Today marks six months since the start of Russia’s full-scale invasion of Ukraine on February 24, 2022. The hostilities that followed have been characterized by widespread war crimes, potential crimes against humanity, and immense human suffering. At least 5,587 civilians have been killed and another 7,890 injured, according to the United Nations – likely a significant underestimate. Countless homes, schools, hospitals, and other civilian structures have been damaged or destroyed, many during apparently unlawful indiscriminate or disproportionate attacks, the vast majority by Russian forces. Often these attacks have used explosive weapons with wide area effects in populated areas, including some with widely banned cluster munitions. In areas that they have occupied, Russian forces have carried out deliberate attacks on civilians, including summary executions, enforced disappearances, torture, sexual violence, and arbitrary detentions. This violence and abuse has led 6.7 million Ukrainians to flee the country over the past six months, while internally displacing another 6.5 million.

Human Rights Watch researchers have been on the ground in and around Ukraine since February 24 – and since the start of this war eight years ago – documenting some of the worst violations. We’ve interviewed hundreds of victims, victims’ families, and witnesses to abuses. We’ve visited towns and villages formerly occupied by Russian forces to investigate atrocities against civilians during the occupation. We also went to the sites of buildings that were hit by Russian bombing and shelling to establish the facts and determine whether specific strikes violated international humanitarian law, or the laws of war.

This video tells the story of some of the violations that we’ve investigated over the past six months.

In all of our research, what we hear again and again is that the victims of these violations want justice. We hope that the documentation we are doing will help lay the foundation for accountability efforts – and help deter these types of crimes from being committed again, in Ukraine and beyond.

Man:  When we first returned after the liberation, the dead bodies were lying on the roads and under fences.

Ihor Zyriano, Kyiv resident: I know that they tortured people with an electric shocker.

Narration: This is a story about cruelty and violence by Russian forces against Ukrainian civilians.

Yulia: Which floor were you on?

Since Russia’s full-scale invasion of Ukraine, my colleagues and I have documented the killing of civilians and damage to homes, schools, and hospitals.

Reports of dozens of bodies found in the rubble, here in Bordianka.

Were there any military targets, Ukrainian forces?

Man: Those who were killed cannot be brought back.

Narration: For about a month, Russian forces occupied parts of northern Ukraine as they tried to take the capital. But since they’ve withdrawn and moved south, and to the east, more and more evidence is emerging of the brutality with which they treated civilians in these areas.

Richard Weir , Human Rights Watch:  Right now, we’re headed up to Bucha, just northwest of the capital, Kyiv. And it was under Russian occupation from the early days of Russia’s invasion of Ukraine.

Man: Mostly everyone, I think, who stayed here lose maybe somebody or something.

Richard Weir, Human Rights Watch: The streets of Bucha are littered with evidence of violations and apparent war crimes. Civilians have been killed on street after street. And it seems like around every corner, there’s more.

Narration: We saw bodies with their hands tied behind their backs, indicating that they were executed. Bodies were found in a mass grave beside this church where town officials had buried people after the morgue filled up. Funeral home workers told us that the bodies showed signs of torture. Among them were women and children. In Bucha and 17 other cities and towns that were formerly occupied, Human Rights Watch interviewed more than 100 people and heard evidence of serious abuses against civilians.

Belkis Wille, Human Rights Watch: There was one large attack on this city that killed at least 47 people on a residential quarter.  At the time, a few weeks ago, we were able to document that incident remotely but now we can finally see for ourselves and further verify all of the details about this incident.

Belkis Wille, Human Rights Watch: But something was hit it in the middle of that building.

Belkis Wille, Human Rights Watch: There was a lot of destruction here. A lot of destruction. So this area was clearly heavily affected by incoming munitions. Here’s one crater. We saw two large craters over there, a smaller one on the other side. We’re trying to find residents of these buildings who were here at the time that the attacks occurred.

Translator: Can you give us more details on what happened during the attack?

At that time, I was in the basement. My neighbor yelled out, “Something is flying, hide!” And that was it! Darkness, sparks flying, this hat flew from my head.

Translator: When this attack happened, were most people still living in their houses?

Translator: Yes, they were in the houses.

Belkis Wille, Human Rights Watch:So they were right here in the basement?

Translator: Yes, they were there.

Belkis Wille, Human Rights Watch:  Do you have any sense of why these attacks targeted this area? Were they any military targets, Ukrainian forces, soldiers, vehicles, in this area?

Olena Piatkina, Chernihiv resident: There was nothing here like that. Pharmacy, residential buildings. There were no soldiers here at all.

Narration: Russian forces have used explosive weapons indiscriminately in populated areas throughout this conflict. Just outside of Chernihiv, we saw evidence of a cluster munition an inaccurate, unreliable weapon that’s banned by most countries. In the latest fighting, Russian forces have used at least six different types of cluster munitions, killing hundreds of civilians.

Ukrainian forces also appear to have used cluster munitions at least once.

Giorgi Gogia, Human Rights Watch: So we are in Kyiv. We just got a lead that there is a man who has survived captivity by Russians.

Narration: Ihor is a hair dresser from Kyiv. He fled with his family to Bohdany village when the conflict started. But Russian soldiers went door to door in the town and he was detained. They brought him to the city of Dymer where he was held with 49 other people.

Ihor Zyriano, Kyiv resident: I know they tortured people with an electric shocker.

Giorgi Gogia, Human Rights Watch: How do you know this? Did you hear screams?

Ihor Zyriano, Kyiv resident: I heard them from the first day to the last.

Narration: Across occupied areas, people like Ihor were rounded up and held in deplorable conditions. Often, their families had no idea where they were or if they were alive. In Yahidne, Russian forces held more than 350 people including more than 70 children in this school basement for almost a month. 10 people died, their names etched here on the wall.

Giorgi Gogia, Human Rights Watch: I just interviewed a 66-year-old guy, a resident of Novyi Bykiv who was detained, rounded up together with other civilians by Russian soldiers during their control of the territory. And he was detained in this building. He’s so scared that he does not want to be on camera, does not want his name to be used. Let’s go inside and I can show you where they were held.

Giorgi Gogia, Human Rights Watch: In this small boiler room, there were 20 people, held at some pont, some of them spent weeks there. I don’t know how to call it, a dug out pit? This is where seven people were kept. Dark, cold. For the seven days he spent here, he was taken to the toilet only three times. He had no food at all.  According to him a Russian soldier came in to say that he had an order to execute eight of them. Made eight people count one to eight and took them out. The next day when he was released, he found two of them dead, their heads smashed in the cemetray a few meters away. The third one was also discovered dead later. The fate of the five is unknown.

Narration:Nearby, Russian forces left graffiti. It likely referes to Russian license plate numbers, indicating where soldiers or military vehicles came from. This could become evidence against the people responsible for crimes committed here.

Narration: Yurii and his friend Ivan were in a car with the town mayor going to pick up medical supplies when Russian soldiers shot at them. Yurii showed us where this happened.

Yurii Shturma, Hostomel resident: Here’s Svyato-Pokrovska Street, the embankment, the shots came from there. When we were here, there was automatic fire, and [my friend] Ivan Zorya was wounded instantly. They were shooting to kill, at the driver, at the passengers. The first bullet hit the ehad of the passenger sitting behind the driver. This was Ivan.

Yurii Shturma, Hostomel resident: I dragged Ivan out and we began moving. They opened fire on us with automatic weapons again.It was really intense. And this is the place where Ivan Zorya died.

Ida Sawyer, Human Rights Watch: The pattern of abuse we are seeing in Ukraine is consistent with well-documented, grafe crimes by Russian forces in other places such as Syria. The lack of accountability for those violations has, regrettably opened the door for what is occurring today. In all of our research, what we hear again and again is that the victims of these violations want justice.

Yurii Shturma, Hostomel resident: Those who were killed cannot be brought back. But those who started this war must pay for everything.

TEXT: Russia should respect the laws of war and hold abusive forces to account.

TEXT: All governments should condemn war crimes in Ukraine and press for justice.

Older People No Longer Invisible Casualties of War in Ukraine

Escapees from Mariupol tell of 'hell on Earth'

Russia: Respect the Rights of Prisoners of War