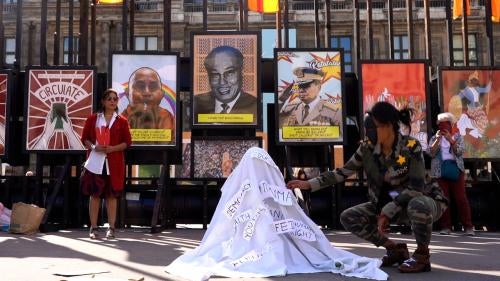 The Myanmar military’s February 1 coup sparked the largest and most widespread protests in the country's recent history, showing people’s determination not to be dragged back into a dark past of military dictatorship.

The military responded with ruthless repression, killing more than 1,000 people, arbitrarily arresting and detaining thousands, banning independent media, and cutting off internet access. The junta’s widespread and systematic abuses, including murder, rape and other sexual violence, and torture amount to crimes against humanity.

Myanmar: In Paris, artists from Myanmar denounce the junta’s abuses

Since February 1 2021, millions of Myanmar people have protested against the coup and abuses by the military junta.

The exhibition Fighting Fear in the Photoclimat biennial shows artworks protesting the coup until October 17.

Bart was Not Here

I want to console the Burmese people that are still inside the country. It’s going to be okay. We just need to push a little further and I know it’s hard, but we’re all gonna do it together.