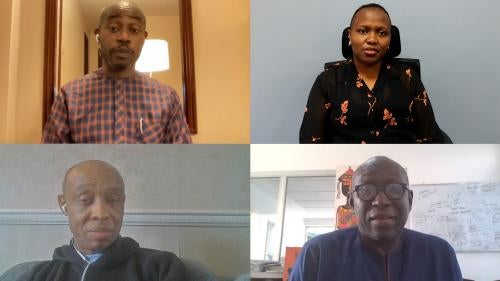 (Addis Ababa) – President Macky Sall of Senegal should ensure that civilian protection, human rights, and justice and accountability are the focus of the African Union’s agenda as he takes over leadership of the 55-country body, Human Rights Watch said today. The African Union (AU) summit is scheduled for February 5-6, 2022.

“Senegal’s President Macky Sall is taking up the presidency of the African Union as the continent faces enormous security and health challenges, political upheaval, and social unrest,” said Carine Kaneza Nantulya, Africa advocacy director at Human Rights Watch. “Despite the challenges, Sall has an opportunity to demonstrate the AU’s leadership and commitment to its founding principles by taking bold, uncompromising stances against state-sponsored abuses, responding to victims’ calls for protection and justice, and pressing for equal and fair multilateral relations with the Global North.”

African leaders meeting in Addis Ababa should give priority to addressing the rampant abuses occurring in the conflict in Ethiopia between fighters affiliated with the Tigray People’s Liberation Front (TPLF) and the Ethiopian federal government and its allies, including Eritrea. The conflict, now ongoing for more than a year, is having a devastating impact on civilians.

Many violations by Ethiopia’s warring parties are war crimes and some may amount to crimes against humanity. Despite recently allowing limited humanitarian supplies to enter Tigray via air, the federal government has for seven months maintained an effective siege on the region, preventing millions of people from accessing food, medicine, cash, and fuel, as well as basic services. In the adjacent Amhara region, communities displaced by fighting and abuses have described looting and destruction of health centers, and limited access to medical care and food.

During the first two weeks of January, at least 108 civilians were killed in government airstrikes in Tigray, including 59 in a January 7 airstrike on an internal displacement site. And while the government has released some detainees in recent weeks, thousands of Tigrayans arbitrarily detained under the country’s sweeping state of emergency remain in informal and formal detention sites.

“AU member states should not ignore the serious crimes committed by all warring parties, including federal government forces, in Ethiopia’s conflict,” Kaneza Nantulya said. “Given the gravity of the crimes, the AU should respond and act under its prevention and protection mandate by calling on all warring parties to end abuses and pressing the government to lift its effective siege of Tigray.”

Beyond the Ethiopian crisis, civilians have been the target of attack elsewhere on the continent. Armed Islamist groups, government forces, and allied militia fighters killed at least 800 civilians during attacks across the Sahel region in 2021. About 700,000 children are out of school in Cameroon’s Anglophone regions due to attacks by armed separatist groups. In eastern Democratic Republic of Congo, the government’s imposition of military rule to address insecurity in the region has not improved civilian protection. More than 1,900 civilians have been killed since the start of martial law in May 2021.

Past Human Rights Watch research has underscored the nexus between security and accountability. In many contexts, the lack of justice for serious crimes – past and present – by government forces has fueled recruitment by armed groups. The African Union should rethink its counterterrorism and counterinsurgency approach and put the rule of law and justice and accountability at the forefront, Human Rights Watch said.

The AU should also support efforts across the continent to establish and effectively put in place specialized mechanisms to investigate and prosecute serious international crimes. In South Sudan, the AU’s legitimacy is at stake after more than four years of discussion with the government on establishing a hybrid court that could help break the country’s cycles of violence and impunity. In Chad, Hissène Habré’s victims still await reparations from the fund the court established in 2016.

A surge in coups and military takeovers over the past year, including in Burkina Faso, Chad, Guinea, Mali, and Sudan, has often denied citizens the right to choose their government, reversed hard-won progress on the rule of law, and resulted in grave human rights abuses. The instability, civic unrest, and political upheavals are frequently rooted in people’s grievances about corruption and the perceived unwillingness of political elites to uphold their constitutional obligations and promises of reform, including promoting political pluralism and stepping down at the end of their term.

Although term limits are not required by international law, the lack of term limits – combined in many cases with political repression and election rigging – undermines the spirit of democracy and has facilitated a pattern in many countries in which incumbents maintain power through periodic elections that are neither free nor fair. This has led to elected governments that are democratic in name only – but authoritarian in all other respects.

Of the 10 African countries with the greatest number of people displaced, 9 have authoritarian-leaning governments, making the shrinking civic and political space a key factor in Africa’s population movements. To achieve real progress toward respect for human rights and people-centered democratic governance, the African Union should adopt and enforce additional policy tools to support the regular, peaceful, and democratic transfer of power. That should include an AU ban on unlimited and unaccountable executive power and stronger policies and tools to deter election rigging and political repression.

“The AU should take action not just as a matter of democracy building, but to better manage increasing cross-border refugee and security issues,” Kaneza Nantulya said. “African leaders should see the peaceful transfer of power through credible elections as a key element in promoting the security of everyone on the continent.”

The AU needs a concerted response to the Covid-19 pandemic, as fewer than 10 percent of the continent’s people are fully vaccinated, mainly because countries have unequal access to vaccines. To address this challenge, Sall should use his AU presidency to urge member states to increase their investment in health infrastructures, while pressing Western governments to ensure that companies that developed safe and effective Covid-19 vaccines transfer technology widely to capable manufacturers in Africa and to the World Health Organization technology hubs.

Sall should also press Western governments and multilateral institutions to adopt a waiver of intellectual property protections on vaccines, treatments, and testing that has been stalled for more than a year at the World Trade Organization.

“The African Union should encourage its members to put in place and expand social protection systems to fulfill the rights to social security and an adequate standard of living amid rising poverty and economic disparities caused by Covid-19 responses,” Kaneza Nantulya said.