A Decade of Enforced Disappearances in Bangladesh

The 57-page report, “‘Where No Sun Can Enter’: A Decade of Enforced Disappearances in Bangladesh,” finds that, despite credible and consistent evidence that Bangladesh security forces routinely commit enforced disappearances, the ruling Awami League has ignored calls by donor governments, the UN, human rights organizations, and civil society to address the culture of impunity. Alongside the report, Human Rights Watch created a webpage tracking and profiling the cases of 86 victims in Bangladesh who were forcibly disappeared and who remain missing.

“Awami League leadership and Bangladesh authorities mock victims and routinely obstruct investigations, making clear that the government has no intention of meaningfully addressing enforced disappearances by its security forces,” said Brad Adams, Asia director at Human Rights Watch. “As critics of the government live in fear of being forcibly disappeared, and families of the disappeared have little hope of getting justice from the government, UN human rights experts should open an investigation into enforced disappearances in Bangladesh.” 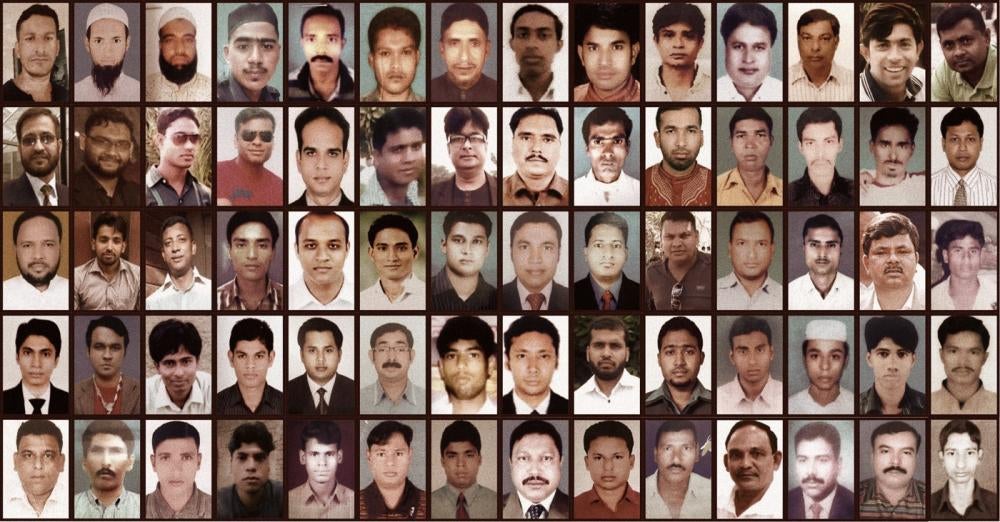 Human Rights Watch has verified 86 enforced disappearances cases in Bangladesh over the last decade in which the victim’s whereabouts have not been revealed. Their cases are documented and tracked here.

Although security forces in Bangladesh have long committed grave human rights abuses, including torture and extrajudicial executions, including under previous governments, enforced disappearances in particular have become a hallmark of Prime Minister Sheikh Hasina’s over decade-long rule.

Ahead of the International Day of the Victims of Enforced Disappearances on August 30, 2021, concerned governments and the United Nations should stand with victims of enforced disappearances by increasing scrutiny of their relationships with Bangladesh security forces, Human Rights Watch said.

United Nations Secretary-General António Guterres should make clear that the UN is unwilling to serve as a cover for the military’s abuses at home. The Department of Peace Operations should sever all ties with any units and commanders found responsible for serious human rights abuses, including commanders who failed to prevent or punish abuses by individuals under their command.

According to Bangladeshi human rights groups, nearly 600 people have been forcibly disappeared by security forces since Prime Minister Hasina took office in 2009. While some victims have been released or produced in court after weeks or months of secret detention, others became victims of extrajudicial killings that are falsely claimed to be deaths during gunfights. Scores are still missing. Many of the victims were critics of the ruling Awami League government.

The Bangladesh government consistently denies that its security forces commit enforced disappearances. Such denials trickle down from the government leadership, through the ranks of authority. Victims’ families repeatedly described outright refusal by the police and other security forces to file a case or conduct a legitimate investigation of alleged enforced disappearances, at times even citing “orders from above.”

The notoriously abusive Rapid Action Battalion (RAB) is responsible for more enforced disappearances in Bangladesh than any other unit, according to Bangladeshi human rights organizations. Describing the unit as a “death squad,” human rights organizations have repeatedly called for RAB to be disbanded. In October 2020, 10 US senators published a bipartisan letter calling for sanctions against top RAB officials for extrajudicial executions, enforced disappearances, and torture.

The United States, UK, Canada, the EU, and other governments with similar human rights sanctions regimes should impose targeted sanctions on top officials with responsibility for ongoing enforced disappearances and other grave abuses.

UN Secretary-General António Guterres should ban Rapid Action Battalion officers from participating in UN peacekeeping missions and ramp up screening of those deployed under the UN flag to ensure its human rights screening policy is being effectively applied in Bangladesh.

“Members of a death squad should not be deployed in UN peacekeeping missions abroad,” Adams said. “The UN Department of Peace Operations should ban the Rapid Action Battalion from peacekeeping and the US should bring individual human rights sanctions against Bangladesh commanders implicated in serious crimes like torture, enforced disappearances, and extrajudicial killings.”

For individual accounts of enforced disappearances from the report, please see below.

“I am broken. There is nobody here to call me mother. The only thing I want is for my son to return. We won’t even talk about it. We’ll forget what happened, please just bring him back. Everything is lost from my end.”

Nur Hasan Hiru, then-BNP organizing secretary in Uttara, Dhaka, was picked up by five or six men claiming to be from law enforcement on June 20, 2011, according to eyewitnesses. Hiru’s family later heard from a security forces contact that he was in RAB custody. Hiru is still missing. His brother told Human Rights Watch: “Over the last 10 years he [Hiru] is missing, we don’t know if he is dead or alive. Even if he is dead, we don’t even get the body. When will this suffering end?”

Police arrested Mohammad Rezoun Hossain, an activist with Chhatra Shibir, the student wing of the Jamaat-e-Islami Islamist political party, on August 4, 2016, witnesses told human rights defenders. He has not been seen or heard from since. “If my son is guilty, then the police can produce him in court,” said his mother, Selina Begum. “Why did the police pick him up and disappear him?” When his family tried to file a complaint at the Benapole police station, they said, the officer in charge of the station at the time told them, “Do not search for Rezoun or we will slaughter you all.”

Mohammad Rafiqul Islam Raja was picked up along with a few of his friends by men claiming to be from the police Detective Branch on April 26, 2013. His friends were later released, but Raja remains missing. Raja’s mother said she wanted to share the information about her son’s disappearance with the world so that she could get her son back. She told human rights defenders that if he was dead, she at least wants her son’s body so that she can “do the proper rituals and pray.”

Tapan Chandra Das, 40, a businessman, was in a rickshaw with his business partner, Gobinda Das, on their way home from a meeting on August 3, 2011, when men claiming to be members of the Detective Branch in Dhaka detained him, Tapan’s wife, Shumi Das, told Human Rights Watch. Gobinda was released but Tapan remains missing. Shumi says that she is still hopeful that he will be returned, that she still wears the red bindi and sindoor indicating that she is married, but that she is worried that it would not have been possible for him to be fed and kept alive for these 10 years. She says that sometimes she thinks she hears him calling her name. There has been no progress on the case.

Mohammad Fokhrul Islam, the owner of Swift Cable Network, was picked up by RAB officers on May 11, 2013, as he was getting his car repaired. A relative said that after RAB denied the arrest, on May 13, 2013, the family filed a General Diary (police report) with the police. Soon after, the relative told human rights defenders that a RAB member told him that if they went too far with the matter, they too would be disappeared.

Mir Ahmad Bin Quasem, also known as Armaan, was picked up from his house by seven or eight men late on August 9, 2016, in the presence of his wife and sister. After his disappearance, Armaan’s family said the police threatened and harassed them. At one point, after some particularly high-profile media coverage, the family said, law enforcement raided their house: “After that [media coverage], the entire house was surrounded by RAB,” a family member said. “One hundred or more. It was scary. They raided the entire house. The stairs were full of police officers.”