Last summer, Russian opposition leader Alexey Navalny narrowly survived an assassination attempt, widely believed to have been organized by Russia's security services, through a Novichok nerve-agent poisoning. Now, without concerted action, he may die from medical neglect in a Russian penal colony where the authorities locked him up following a mockery of a trial. The botched nerve-agent attack, since exposed, was supposed to have been accomplished with deniability. If Navalny now dies in prison, the blame will lie unequivocally with the Kremlin.

The Kremlin has already weathered a raft of Western sanctions imposed for misdeeds ranging from the Novichok poisoning of Navalny and of a former KGB agent in Britain, to Russia's seizure of Crimea and hacking into US databases. It's reasonable to wonder what else at this stage could possibly be done to ensure that Navalny survives his monstrously unjust and politically motivated prison stint. Western leaders should make clear that Navalny's health and freedom will be their personal mission, one that will not fade with the news cycle, until he walks out of prison gates. 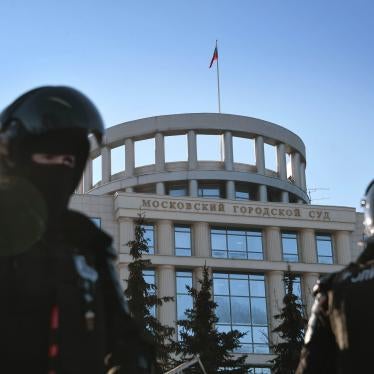 It's not hard to see why Russian authorities are now sparing no effort to make Navalny -- and his backers -- believe that political opposition is futile and to make them pay a very high price for their activism. Navalny's support was once said to extend no further than the intelligentsia of Moscow and St. Petersburg, but he eventually built a following across the country. Indeed, it was while he was visiting supporters in distant Siberia that the Federal Security Service (FSB), the KGB's main successor, apparently tried to kill him.

Navalny also learned to fight back even within the Kremlin's simulated democracy. The Kremlin hoped that it could get away with a façade of tame, pro-Kremlin "opposition" parties while barring Navalny's party and impeding others. Navalny did an end-run around this obstruction by encouraging people, through a "Smart Voting" campaign, to vote for candidates from these pseudo-opposition parties in lieu of candidates from the ruling United Russia.

For many years, the Kremlin has tried to manage information and manipulate the public mood by controlling television and other mainstream media. Navalny sidestepped them by producing slick documentaries and posting them on YouTube. His latest, "Putin's Palace," alleges that an enormous estate was built for President Vladimir Putin with the fruits of corruption. While Putin denies being the "owner" of any palace, the video has been viewed well over 100 million times.

Russian authorities' imprisonment of Navalny has only boosted his profile. Now from his prison cell, he is highlighting the Kremlin's refusal to give him independent medical care he can trust for what appears to be a combination of an undiagnosed respiratory illness and serious back pain. His three-week hunger strike has brought him to what his doctors say from afar could be the brink of death. One of the doctors said that test results he received from Navalny's family showed sharply elevated levels of potassium, which could lead to cardiac arrest, and signs of kidney failure.

The Russian ambassador to Britain has said that Navalny "will not be allowed to die in prison," but he notably did not promise that the Kremlin will allow him the independent medical care he needs. Nor does Navalny's move to a hospital located in the "territory" of another penal colony assure that. So what can Western governments do to deter the Kremlin from definitively silencing this highly effective opposition leader? So far, the White House has threatened unspecified "consequences" should Navalny die, and the European Union has issued a tough protest.

Governments should state unequivocally that Navalny's fate is in the Kremlin's hands -- that the Kremlin bears direct responsibility for his health and life. They should cut through the mind-numbing efforts by Russian authorities to treat Navalny's case as though he were just another prisoner.

Much of Navalny's growing appeal rests on his ability to uncover evidence to spotlight the official corruption that has enriched the enormously wealthy oligarchs around Putin. Western intelligence agencies undoubtedly have far more detailed information on the wealth of Kremlin-favored oligarchs and senior officials. Western governments could signal that should anything happen to Navalny, they will start releasing that information.

As Navalny's health rapidly declines behind bars, his supporters' freedom may also be in jeopardy. On Friday, the Moscow prosecutor's office petitioned a court to have three organizations affiliated with him declared "extremist" -- the Anti-Corruption Foundation (FBK), the Foundation for Protection of Citizens Rights, and "Navalny's Headquarters." That could lead to all three groups being outlawed, putting their numerous staff members and backers across the country at great personal risk, including of criminal prosecution. This broader movement needs defending.

By the same token, Navalny's following has grown because of mounting public disappointment in a government that seems to be serving Putin's entourage well but has left most Russians with a sluggish economy, stagnating purchasing power, and diminished prospects. Western governments should highlight the Kremlin's economic choices behind this sorry state of affairs.

The Kremlin still goes through the motions of claiming that Russia is a democracy. Western leaders should expose the hollowness of this claim. The raft of laws rammed through parliament this winter has left Russia's democracy in tatters, tagging as a "foreign agent" just about anyone who engages in public criticism and has, however obliquely, received any amount of support from abroad. The logic goes: if you are a critic, you must be foreign, and if you're foreign, you're the enemy. The new legislation also codified equating a series of single-person pickets with "mass protests." Under a 2014 law, if you're found guilty more than twice in a 180-day period for "unlawful" protesting, you can go to prison.

In short, the Kremlin's idea of "democracy" is one in which opposition voices are not heard and members of the opposition are not able to convene or protest. That's not democracy. It's authoritarian rule. Western leaders should say so.

The Kremlin may hope to stymie the pro-democracy movement by beheading it. Every effort should be made to save Navalny. But Western leaders should make clear that they will also call out the steps taken to crush his movement and to destroy democracy in Russia. We can only hope that it would be enough to spare Navalny's life.

This commentary has been amended to reflect the conditions under which a person found guilty  for "unlawful" protesting can face prison time.