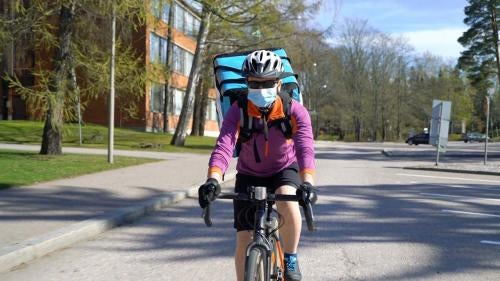 (Los Angeles) – Californians should vote No on Proposition 22, a ballot measure that would eviscerate minimum wage and other labor rights protections for the state’s grocery app workers, Human Rights Watch said in a video released today. By rejecting Prop 22, voters can help ensure that grocery shopping and delivery apps – a fast-growing segment of the gig economy – comply with a 2019 law that protects workers’ rights to a decent living, as well as safe, healthy working conditions.

“Prop 22 would leave grocery app workers at the mercy of mysterious pay algorithms that deny them a minimum wage,” said Amos Toh, senior artificial intelligence and human rights researcher at Human Rights Watch. “Voting No on Prop 22 is a critical step toward undoing the exploitation of gig workers, who are entitled to make a decent living like the rest of us.”

Between May and August 2020, Human Rights Watch interviewed 19 Instacart and Shipt workers both in and outside California. Human Rights Watch also spoke with labor law and technology experts, labor organizers, and economists, and reviewed studies of workers’ earnings, companies’ policies and practices, and court filings.

Proposition 22 would strip app-based delivery workers of state employment protections, including minimum wage. Although it would require companies to pay workers 120 percent of the applicable minimum wage while they are fulfilling orders, this formula fails to compensate workers for their time waiting for order requests.

There is no publicly available data on average wait times for Instacart and Shipt workers, but a study of ride-sharing apps indicates that drivers spend about 33 percent of their time waiting. Philippa Mayall, a Shipt shopper, told Human Rights Watch that some days were “so slow” that she would only get “one order every other hour.”

Prop 22 would inadequately compensate workers for work-related expenses, reimbursing them only 30 cents for each mile traveled to complete delivery. According to the National Employment Law Project, this reimbursement rate is far from enough to cover expenses, which range from gas and mobile data to cleaning supplies.

The proposition stands in stark contrast to Assembly Bill 5, a law California passed in September 2019 requiring gig companies to reclassify their workers as employees instead of independent contractors. In addition to providing them the local minimum wage, this reclassification entitles them to other employee protections such as state unemployment insurance, overtime pay, workers’ compensation, and paid sick leave. Prop 22 would reverse this reclassification, eliminating these protections for grocery app workers.

The lack of minimum wage protections has made it possible for Instacart and Shipt to introduce inscrutable and ever-changing algorithms that create enormous pay volatility and financial insecurity. “Without any notification, Instacart can change our pay,” said Ginger Anne Farr, an Instacart shopper. “At one point they took our pay and cut it, to the point where I had to go on financial assistance and get help in getting food while working full-time for them.”
Problems with tips also drive down workers’ earnings. Instacart has resisted calls from shoppers to change the default tip option from 5 percent to 10 percent, even though shoppers rely heavily on tips. Shipt has acknowledged errors in its tipping system and said it would address them.

“Glitches in the [Shipt] app and other problems make tips even more unreliable,” said Willy Solis, a Shipt shopper and lead organizer for the Gig Workers Collective. “It is causing a huge fluctuation in our pay.”

According to California Secretary of State records, Instacart and four other gig companies have spent over $185 million to pass Prop 22 – the most expensive ballot initiative campaign in the state’s history. Instacart did not respond to a request for comment.

Shipt has not commented on Prop 22. A Shipt spokesperson told Human Rights Watch that its updated pay model accounts for shoppers’ “effort,” and that they “strongly” disputed that this model lacks transparency. But Shipt said that its pay model is “proprietary,” and would not disclose how the model weighs factors like delivery time, the number and weight of items ordered, and distance traveled.

Shipt also claims that, in September 2020, it paid an average of “$21.97 per shop” nationwide. But it is impossible to assess whether this figure satisfies the hourly minimum wage standard without additional information. Shipt does not specify the average shopping time, which can vary widely based on the number of items ordered, traffic, and distance. The figure Shipt cites includes one-off bonuses known as “promo pay,” which are at the company’s discretion, as well as tips, which are not part of the minimum wage calculation in California. Shipt’s figure also does not account for the expenses and additional payroll taxes for independent contractors.

“The Yes on Prop 22 campaign that these large gig companies are financing threatens to create a class of workers scraping to get by,” said Lena Simet, senior poverty and inequality researcher at Human Rights Watch. “To make sure that workers don’t get stripped of their most basic rights, California voters should vote No on Proposition 22.”