Fifteen years ago, I sat in a Baton Rouge, Louisiana, hotel room, watching with a growing sense of dread as the first reports rolled in of the path of destruction cut through the southern US state by Hurricane Katrina’s fury.

I had only lived in New Orleans for a month; I had few friends, no vehicle, or plan to evacuate. Thankfully, my neighbors loaded me into their van to escape the storm. I returned to New Orleans four months later and spent the following three years pitching in on rebuilding the city and soaking up its culture and community of this unique city. 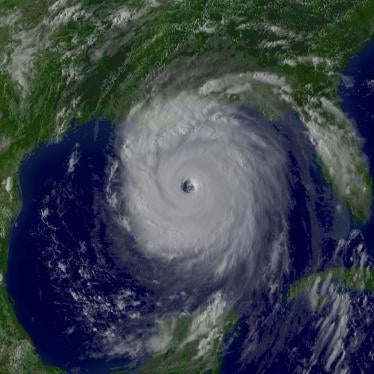 Yet on the eve of the 15th anniversary of Katrina, and as we assess Hurricane Laura’s path of destruction, human rights in Louisiana remain at risk, particularly for Black and brown people who are disproportionately imprisoned and impoverished.

If one ever needed proof of how cruel the US criminal legal system can be, they need only look to Katrina, where inmates were abandoned as toxic flood waters rose to their chests. Prisoners’ letters to Human Rights Watch describe their terror. Then, after inmates were finally evacuated from that traumatic experience, they faced fresh abuse at the prisons to which they were moved.

Louisiana counties currently have some of the highest jail incarceration rates in the country. Today, authorities’ duty to protect people in custody encompasses not just the threat of storms but also Covid-19. This includes protecting detained asylum seekers and others held in immigration detention. A huge portion of the country’s immigration detainees are held in rural Louisiana, where facilities have proliferated under the Trump administration.

Louisiana authorities have failed to protect the economic and social rights of those who live there. A quarter of the state’s children live in poverty. In New Orleans, white income is nearly three times higher than the average income of Black households. Black males live seven fewer years on average than white males in the state. More Black and Hispanic people in Louisiana did not graduate high school than earned a bachelor’s degree.

These are only some of the problems bedeviling Louisiana. There are no simple solutions to the issues of rampant poverty and racial and ethnic inequality, but here’s a suggestion to start: reducing the role of police and the criminal legal system in addressing social problems, and instead directing more investment to communities.