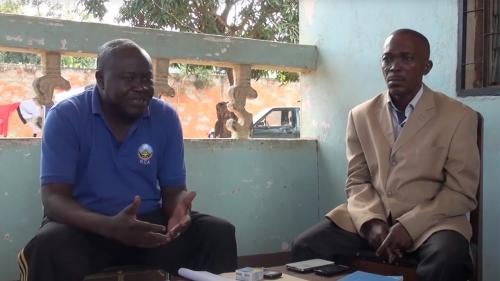 (Nairobi) – The International Criminal Court (ICC) announcement on July 16, 2020 of the upcoming trial of two militia leaders is a significant step for justice for grave crimes committed in the Central African Republic, Human Rights Watch said today, releasing a video interview with one of the accused. The interview took place on September 3, 2014, at the height of the country’s most recent conflict.

The court announced that the trial of Patrice-Edouard Ngaissona and Alfred Yekatom will begin on February 9, 2021. In the 53-minute video, Ngaissona discusses his experience in the anti-balaka militia, attacks on civilians in the towns of Bossangoa and Bambari, and his involvement in negotiations to end the conflict

“The people of the Central African Republic suffered unspeakable atrocities and horrors during the civil conflict that began in 2012,” said Elise Keppler, associate international justice director at Human Rights Watch. “Fair, credible trials of those implicated in the worst of those crimes is crucial for the victims and their families and will be a critical part of ending the cycles of impunity that drive violence in the country.”

Beginning in 2013, fighting between the Seleka, a brutal rebel coalition of mostly Muslims from the Central African Republic’s northeast, and loosely organized Christian and animist militias called anti-balaka displaced hundreds of thousands of people. The Seleka had, at that point, assumed control of the country. Anti-balaka fighters, who first launched counterattacks against the Seleka, soon carried out gruesome attacks on civilians in Muslim neighborhoods, often equating Muslim civilians with the Seleka.

In the video, Ngaissona does not contest that the anti-balaka were responsible for some abuses, but he maintains that not everyone who committed abuses was part of the militia. He calls the anti-balaka a “popular revolution” and says that Central Africans “have the right to rise up to defend their homeland.”

While he does not contest that he was a leader of the anti-balaka, he also says that the group should not be exclusively targeted for its abuses and that “it is the Central African population that rose up.”

He says he had made an effort to achieve peace in the Central African Republic:

[T]he job I do is with the aim of bringing appeasement. The men demonized me at the beginning. But today they know that, no, it is not the person who has been demonized. My mission is to enable this country to regain its place, to find peace. And I would like to live with my brothers again, together.

He notes that he was in regular communication with Seleka leaders, including Mohamed Moussa Dhaffane, former minister of water and forests under the Seleka.

For security reasons and to protect the identity of several individuals in the video, their images are blurred and their voices are replaced with the voices of actors.

Ngaissona and Yekatom are the highest ranking anti-balaka leaders to face trial for crimes committed during the country’s most recent conflict. Their prosecution at the ICC is in stark contrast to the absence of proceedings against Seleka leaders and their allies, who continue to control vast territory in the country. The ICC has not issued arrest warrants against any Seleka leaders, unless they are under seal. Cases against those implicated in abuses committed by the Seleka forces are needed, Human Rights Watch said.

While violence in the Central African Republic has decreased since the 2014 interview with Ngaissona, about 75 percent of the country is controlled by armed groups. These groups continue to attack and mistreat civilians and attack United Nations peacekeepers. Lack of accountability for serious crimes helps drive this violence.

In a 2019 peace deal, armed groups attempted to include an amnesty, and some group leaders consider any move to hold them accountable for serious crimes as contradicting the spirit of the deal. There are currently 684,000 displaced people inside the Central Africa Republic and 617,000 Central African refugees in the surrounding region. Many of them have been displaced since 2013.

“The conflicts in the Central African Republic have been marked by near-total impunity for war crimes and crimes against humanity,” Keppler said. “The trial of Ngaissona and Yekatom – and hopefully others soon – will help to establish the facts and determine responsibility for these crimes. Justice will help open a new chapter for the Central African Republic, based on respect for the rule of law.”