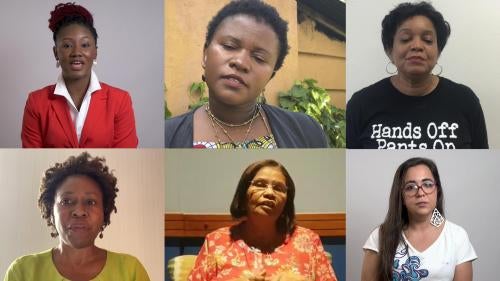 (New York) – The global #MeToo movement has sparked significant social, cultural, and legal change, but many challenges remain, Human Rights Watch said, on the eve of the second anniversary of the #MeToo hashtag going viral on social media.

Human Rights Watch issued a video, “The Global Power of #MeToo,” in which activists from Belgium, the Dominican Republic, Gambia, Lebanon, Uganda, and the United States discuss the successes of the #MeToo movement and the need for further action to prevent sexual harassment and violence and ensure accountability for abuse.

“The #MeToo movement is thriving, and what exploded as a tidal wave on social media has translated into robust public debate, shifting social norms, and concrete changes in laws and policies,” said Nisha Varia, women’s rights advocacy director at Human Rights Watch. “One of the biggest changes is the growing space and support for survivors to speak up and break the silence around sexual harassment and assault.”

In a landmark development that could change sexual harassment laws and practice globally, governments, employers, and worker representatives in June adopted new international legal standards on violence and harassment at work. The International Labour Organization (ILO) Violence and Harassment Convention sets out minimum obligations for how governments should address harassment and violence at work.

This includes passing national laws, putting in place prevention measures, and committing to monitoring and enforcement. The treaty obliges governments to require employers to have workplace policies addressing violence and harassment, risk assessments, and training. It also requires access to remedies for victims, including complaint mechanisms, whistleblower protections, and compensation.

Countries that ratify agree to align their national laws to the treaty’s standards and will be periodically reviewed for their compliance by the ILO. Already, 10 countries – Argentina, Belgium, France, Iceland, Ireland, Namibia, Philippines, South Africa, Uganda, and Uruguay – have announced their intention to ratify the treaty.

“Governments should ratify and carry out the new ILO Violence and Harassment convention as soon as possible,” Varia said. “The #MeToo movement has exposed deeply entrenched norms that enable abuse, and urgent action is needed to ensure that all workers are guaranteed their safety and dignity.”

Despite progress, there has also been backlash, Human Rights Watch said. There has been resistance against some reforms and the use of defamation suits against those who turned to social media to make claims of abuse. Sandra Muller, whose tweet sparked France’s #metoo or #balancetonporc movement, was fined for defamation in September, and an Indian high court ordered Facebook and Instagram earlier this month to reveal the identity of the person running an anonymous account sharing #MeToo stories in India’s art world.

The activists featured in the video include:

“While much has been accomplished, survivors still confront victim-blaming and the threat of retaliation for speaking up,” Varia said. “There is still a tremendous amount of change needed to win the fight against sexual harassment and assault.”

The activists appearing in the video are from Belgium, the Dominican Republic, Gambia, Lebanon, Uganda, and the United States. The news release was updated to remove Kenya from the list and add Uganda.