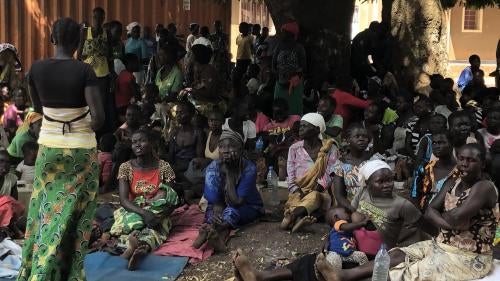 “Soldiers…sometimes killed those who were left behind. Even if you were sick or old.” When the chief of Pisak, a town in South Sudan’s Yei River state said this to me, he was concerned for the safety of five members of his community who were unable to flee from a March government operation against rebels in Yei because they were older or had disabilities.

During the operations, government soldiers shot at civilians, looted extensively, burned homes and crops, and chased thousands of people from their villages. While these are not unusual stories in South Sudan, the situation has been even worse for people at heightened risk.

Since the conflict broke out in December 2013, Human Rights Watch has documented the experiences of people with disabilities and older people who were unable to flee to safety, and killed, tortured, or burned alive in their homes by soldiers and rebels.

The humanitarian response in South Sudan has also often fallen short of being inclusive. Older people and people with disabilities have faced challenges accessing basic services, including food, shelter, sanitation, health, education, and earning a livelihood. Additionally, accessing psychosocial services for large portions of the population remains a challenge.

Displaced people in Yei survive by living with host families, or in abandoned shelters doing jobs like fetching water, baking, laying bricks for houses, and collecting and selling firewood. Among the displaced, older people and people with disabilities were facing even harsher difficulties accessing such services.

For the first time in more than a decade, the UN secretary-general’s 2019 report on protection of civilians documents the experiences of older people and people with disabilities in armed conflict, urging greater protections for those at heightened risk.